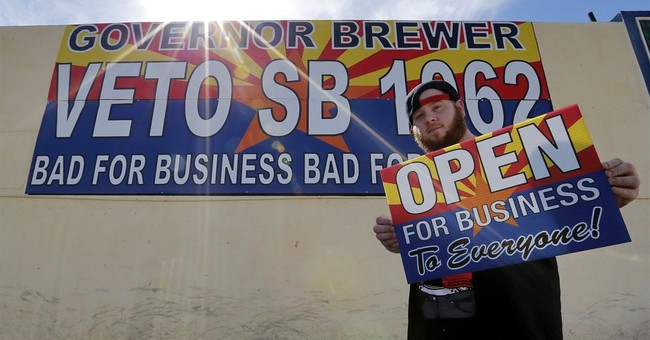 What caused three Republican lawmakers in Arizona to sign SB 1062 only to reverse course a few days later and urge Governor Jan Brewer to veto the bill?

The controversial religious freedoms bill, which Gov. Brewer ultimately vetoed, was passed along party lines by a vote of 17 (Republicans) to 13 (Democrats), but as the bill received tremendous public opposition, from Apple to the NFL, from Delta Airlines to the NBA, and from Mitt Romney to John McCain, three of those Republicans had a change of heart.

As reported on February 25th, “three state senators, who initially voted in favor of the measure, said in a letter to Republican Governor Jan Brewer that the proposal had been mistakenly approved in haste and had already caused ‘immeasurable harm’ to Arizona's national image.”

Mistakenly approved in haste? Really? They didn’t sufficiently understand what the bill was about, and they had no idea what the consequences of passing it might be? And these are elected officials whose job it is to understand the bills that pass before them?

The three senators, Adam Driggs, Steve Pierce, and Bob Worsley explained that, “While our sincere intent in voting for this bill was to create a shield for all citizens’ religious liberties, the bill has instead been mischaracterized by its opponents as a sword for religious intolerance.”

And, in pressing Gov. Brewer to veto the bill, they wrote that, “These allegations are causing our state immeasurable harm.”

Now, I don’t want to be obtuse here, but are they saying that because of the intense public backlash brought about by false allegations against the bill, they changed their minds? What kind of reasoning is this?

If you believe you’re doing the right thing and your opponents smear you and lie about you, causing public outrage against you, do you stand up for what you believe to be right and combat the lies, or do you retreat because of false perceptions brought about by the lies?

If the bill was not “a sword for religious intolerance” and your critics claim that it is, don’t you expose their misrepresentation, especially when it is bringing negative attention to your state?

Something is not lining up here.

As to the mischaracterization of the bill, a group of 11 constitutional scholars wrote a four-page letter to Gov. Brewer stating that the bill had been “egregiously misrepresented by many of its critics.”

And while 9 of the signers of the letter supported the legislation and two were unsure about it, “all of us,” they wrote, “believe that many criticisms of the Arizona law are deeply misleading.”

These are very strong words for such a diverse and prestigious group.

They stated, “To be clear: SB 1062 does not say that businesses can discriminate for religious reasons.” At the same time, they criticized a related bill that was under consideration in Kansas, noting that, “People claiming that the two bills are similar are simply smearing the Arizona bill . . . .”

But who cares about truth when popular opinion is against you and, after all, without popular opinion on your side, you cannot be elected or reelected? And, as a politician, would you want your name associated with a bill that might have cost Phoenix the right to host the next Super Bowl in 2015? Do religious freedoms and moral backbone compete with the NFL and the hundreds of millions of dollars the Super Bowl would bring?

I am sympathetic to the real concerns about the state getting a bad reputation, resulting in a serious loss of business and hurting many hardworking Arizonans. And I am sympathetic to concerns that there could have been discrimination against gays and lesbians, although the legal scholars who wrote to Jan Brewer, along with the proponents of the bill, strenuously denied that this would have been a consequence of the bill.

But I am totally unsympathetic to legislators approving a bill with the hope that it will be signed into law, only to reverse course when a flood tide of criticism arises. And I remain baffled by how these senators could justify their double-mindedness based on the negative consequences that arose because of lies being told about the bill.

The smear campaign against the bill was so effective that a

So, you sign a bill with the “sincere intent” of creating “a shield for all citizens’ religious liberties,” which is certainly an important and commendable goal, but a smear campaign against the bill results in national outrage over the bill, as a result of which you then urge the governor to veto the bill.

Something here is not adding up, and to be candid, it smells like legislative hypocrisy, also known as spineless pragmatism, the blight of many a politician over the years.