Nationalism Is Not Necessarily a Bad Thing

Michael Barone
|
Posted: Aug 12, 2016 12:01 AM
Share   Tweet
The opinions expressed by columnists are their own and do not necessarily represent the views of Townhall.com. 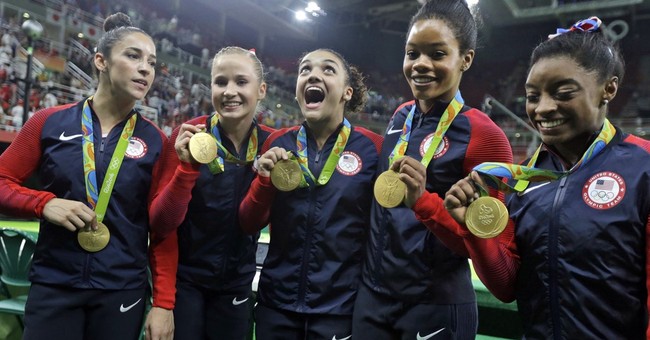 Google "Donald Trump" and "nationalism" and you'll get 1,090,000 results, the large percentage of which are, to judge from the top hits, negative. "Nationalism" is deemed to be bad stuff, maybe even akin to Nazism.

But is nationalism always so bad? Not, it seems, for the millions of people around the world watching the Rio Olympics. They watch as the TV networks keep track of the metal count -- and they root for the men and women they see representing their nations.

Americans were thrilled to see Michael Phelps propel the U.S. team to gold in the freestyle relay and excited to watch 19-year-old Katie Ledecky destroy the field in the 400 meter freestyle. People who watch gymnasts at only four-year intervals were amazed at the skill of the 4-foot-9-inch Simone Biles.

News coverage in other countries has focused on their own athletes. British front pages flashed pictures of record-breaking breaststroker Adam Peaty, mouthing the words of "God Save the Queen" as he held his gold meal. Brazil's TV Globo showed judo medalist Rafaela Silva, who grew up in a Rio favela, bow down on her knees to Brazilian fans in the stands.

Sports nationalism easily embraces ethnic and racial diversity, not only from historically biracial America and Brazil (which abolished slavery in 1865 and 1888) but also from European and other nations. One Olympic table-tennis match featured a Japanese-descended Brazilian and a Chinese-descended Congolese. People from nations with sharply divisive politics (not least our own) and suffering from economic setbacks and pervasive corruption (like the Olympics host, Brazil) nonetheless find themselves united in rooting for their country's athletes.

An elite globalist may scoff at the arbitrariness of national border and style himself "a citizen of the world," as Barack Obama described himself before a massive crowd in Berlin in 2008. But most people don't think of themselves that way. Nation-states inspire loyalties in a way the United Nations or the European Union have failed to do.

Nationalism, properly understood, can be a positive force, welding otherwise disparate people together to build a decent society, secure a competent government and rally to defend themselves against attack. Each nation has developed its own particular culture, its own manners and mores, its own rules, written and unspoken.

An intelligent nationalist can respect the strengths of other nations, while preferring his own, just as an Olympics fan can appreciate the superb performance of athletes from other countries even while keeping an eye on the medal scoreboard.

The social psychologist Jonathan Haidt, writing in The American Interest, notes that as nations grow more prosperous, their elites become more globalist in outlook, and consider nationalism as blind prejudice or even racism. But, as he writes, "having a shared sense of identity, norms and history" -- e.g., nationalism -- "generally promotes trust."

"Nationalists feel a bond with their own country, and they believe that this bond imposes moral obligations both ways," he goes on. "Citizens have a duty to love and serve their country, and governments are duty bound to protect their own people."

This is a principle that Donald Trump, in between off-the-cuff gaffes and self-harming diversions, affirms. Nations have boundaries and owe greater duties to their citizens than to foreigners. They have no obligation to open their borders entirely. It is not racist, Haidt argues, to bar those "whom they perceive as having values that are incompatible with their own, or who (they believe) engage in behaviors they find abhorrent, or whom they perceive to be a threat to something they hold dear."

Hillary Clinton takes a different view. She would not deport any noncriminal illegal immigrant, which amounts to a permanent open borders policy -- as extreme a position as Trump's now discarded ban on Muslim immigration.

But even Democrats at their national convention found it useful to sound nationalist themes, decrying Trump's "dark" picture of America in his acceptance speech as somehow unpatriotic and, after conservative bloggers noted their supposed absence on the Democratic Convention's first day, installing more prominent American flags on the stage.

And former Treasury Secretary and Obama adviser Lawrence Summers has called for "a responsible nationalism" which recognize government's responsibility "to maximize the welfare of citizens, not to pursue some abstract concept of the global good."

Evidently, nationalism, like rooting for your nation's Olympians, is not necessarily a bad thing.