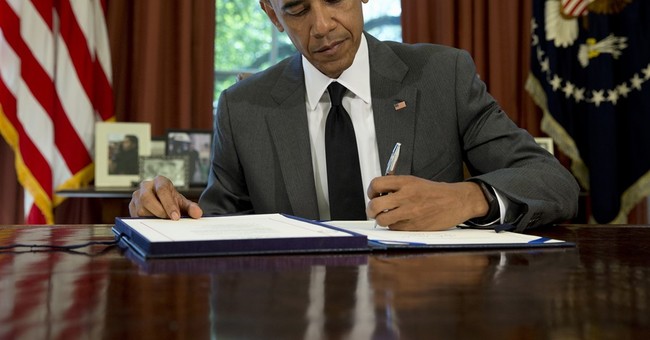 "Faute de mieux." That means "for want of something better" in Secretary of State John Kerry's second language. It's also the best case made by its journalistic defenders for approval of the nuclear weapons deal Kerry negotiated with Iran. Or to be more exact, for rallying 34 votes in the Senate or 146 votes in the House to uphold a presidential veto of a congressional vote to disapprove.

It's a measure of the weakness of the deal that such a grudging argument is needed to rally such an unimpressive proportion of members of Congress.

New York Times reporter Thomas Friedman, generally a supporter of Barack Obama's policies, makes the "faute de mieux" argument explicitly. But he also adds some conditions -- er, recommendations -- to his endorsement, which aren't likely to be congenial to the president.

Put a tough military man in charge of seeking enforcement. Get Congress to pass an authorization for use of military force (AUMF) in case Iran cheats. Reach out to the Iranian people who, all indicators suggest, don't like the mullahs' regime. And, in the Middle East, don't tilt too far toward either Iran's Shia or the Saudis' and others' Sunni allies.

That last recommendation is hard to carry out. As The American Interest's Walter Russell Mead argues, it's only practicable to do two of the three following things: (1) reach a deal with Iran, (2) preserve alliances with the various Sunnis and (3) do nothing in Syria. Since No. 1 is done and No. 3 is clearly Obama's preference, No. 2 seems doomed, despite Defense Secretary Ashton Carter's post-deal Middle East diplomacy.

Tough enforcement would be a "volte-face" (more diplomatic French) from the Vienna negotiators' tactics and Obama would surely discourage an AUMF as he tried to discourage Congress's push for strong sanctions against Iran.

As for reaching out to the Iranian people, Obama refrained pointedly from doing so when the Green protests against the mullahs' election frauds broke out in June 2009. At the time that seemed a puzzling decision: why not push, as Ronald Reagan did against the Soviets in Eastern Europe in the 1980s, in the direction of regime change?

Six years later it seems not so puzzling. As former Bush National Security staffer Michael Doran argued in a lengthy article in Mosaic magazine, Obama's policy toward Iran seems motivated by a desire for "rapprochement" and an eschewal of any moves toward regime change.

We should approach adversaries with an open hand, as he said in his first inaugural address, if they are willing to unclench their fist. The nuclear deal with Iran, as Deputy National Security Advisor Ben Rhodes explained this spring, would be as important an accomplishment in the president's second term as Obamacare was in his first.

Friedman argues that the Iran deal gets the United States two good things. One is to prevent "Iran from producing the fissile material to break out with a nuclear weapon for 15 years." But "break out" is an ambiguous term.

No serious analyst thinks the mullah regime is averse to cheating. It has done so before and been caught -- belatedly. And the inspection process seems full of holes. Iran is not required to document previous nuclear efforts. It is supposed to provide soil samples from nuclear sites to the International Atomic Energy Agency (IAEA).

There is at least a 24-day delay -- quite possibly much more -- between complaints of violations and inspections. And one does not have to impute bad faith or incompetence to the IAEA to note that its inspections processes involving hostile regimes have been flawed.

The prudent course is to expect violations, expect them to go undetected or unconfirmed for lengthy periods and thus expect Iran to move farther toward operational nuclear weapons than the deal contemplates.

Moreover, under paragraph 36 of the agreement, Iran can abandon its obligations any time it complains that the other signatories have abandoned theirs. It's not hard to imagine how such complaints could be concocted.

That's not likely to happen in the remaining 17 months of Obama's term. But it could any time thereafter. Unless the deal, as Friedman hopes, "creates a context that could empower the more pragmatic forces inside Iran over time."

Obama's entire Iran policy is based on the "conjecture" -- historian Niall Ferguson's word -- that this deal will lead to beneficent regime change. That could prove right. But most American voters, most foreign policy experts and most members of Congress think not.