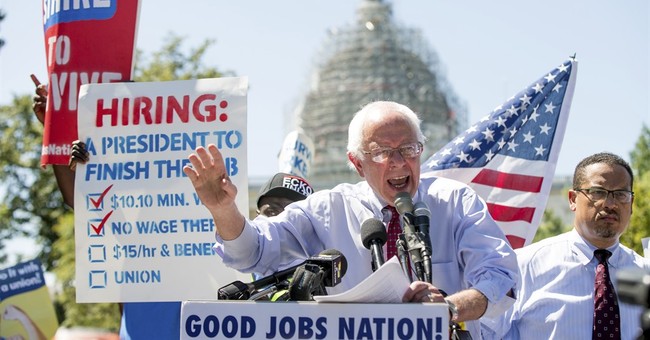 America's two major political parties have a difficult task: amassing a 51 percent coalition in a nation that has always been -- not just now, but from the beginning -- regionally, religiously, racially and ethnically diverse.

And, while the media and the voters are transfixed by the antics of Donald Trump, and speculating on possible damage to Republicans, Democrats are having some trouble holding their coalition together in the run-up to 2016.

That trouble was apparent at last weekend's Netroots Nation conference. Martin O'Malley, the former Maryland governor whose candidacy has made few ripples so far, was faced with "Black Lives Matter" protesters. His response, one that almost all Americans would agree with: "Black lives matter. White lives matter. All lives matter." At which point he was booed off the stage.

"It would be a terrible mistake for the progressive movement to split into a 'black lives matter' movement and an 'economic justice' movement," laments Clinton administration Secretary of Labor Robert Reich. But the fact is that the different priorities of gentry liberals and black activists, two heavily Democratic constituencies, are sparking heated arguments.

There may be some heated arguments as well over how to respond to the recently released videos of high-ranking Planned Parenthood officials discussing the sale of fetal body parts. The blithe statements that fetus's bodies should be crushed in ways preserving the option of selling livers, hearts and lungs for $30 to $100 strikes many as grisly.

Some liberals have rushed to Planned Parenthood's defense. The videos were taped by abortion opponents operating under false pretenses, they say, as if that made them inauthentic. And they deny that the fetal parts are sold at a profit (which is illegal) though the officials seem unconcerned about the possibility that their fees will exceed expenses.

The 2012 Obama campaign appealed to single women by suggesting that without Obamacare's contraception mandate, contraceptives would somehow be unavailable -- a favorable way to frame the abortion issue. But the Planned Parenthood videos are, in the words of Democratic columnist Kirsten Powers, "stomach-turning stuff."

Most mainstream media outlets are carefully avoiding the subject, as The Federalist's Mollie Hemingway points out. The New York Times and Washington Post ran 773 stories on the Confederate flag over the last month but only 31 on the Planned Parenthood video. Heavily pro-choice newsrooms have no appetite to discredit the nation's leading abortion provider, but may be forced to as members of Congress hold hearings and propose legislation.

Then there is the issue of sanctuary cities, highlighted by the murder on July 1 of Kathryn Steinle by a five-times-deported illegal immigrant whom the San Francisco sheriff set free rather than turn over to federal authorities.

Democrats have defended sanctuary city policies by arguing that illegal immigrants won't cooperate with law enforcement if they're afraid of being deported. But, for some, the San Francisco murder was too much. House Minority Whip Steny Hoyer, with evident sincerity, decried San Francisco's action. So, perhaps more tactically, did Hillary Clinton.

But some Hispanic leaders and liberal city officials defend sanctuary cities' policies. And so, as congressional Republicans press the issue, Democrats are likely to be split.

It is natural for a party's wingers -- right-wing Republicans or left-wing Democrats -- to be restive near the end of their party's president's second term. They take his accomplishments for granted and lament goals not achieved. Barack Obama's increasingly leftward lurch has encouraged the party's left wingers to angrily air their views, often in terms unappealing to those outside their narrow groups.

The result is tension between the party's major constituencies and highlighting of positions unpopular with the larger general electorate. Shouting down speakers who say "all lives matter" is not popular. Neither is the sale of fetal organs. Nor are sanctuary cities.

Republicans certainly have their problems, not all of them labeled Trump. But so do the increasingly divided Democrats.