Are We In for Another High-Crime Era After the Response to Ferguson and Baltimore? 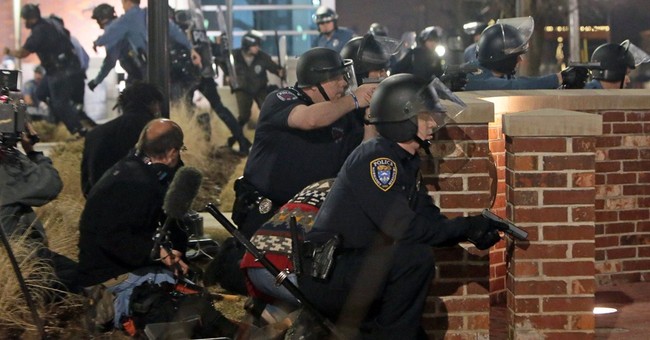 Trending
Are we seeing a reversal of the 20-year decline in violent crime in America? A new nationwide crime wave?

Heather Mac Donald fears we are, and as a premier advocate and analyst of the policing strategy pioneered by Rudy Giuliani in New York City and copied and adapted throughout the country, she is to be taken seriously. And the statistics she presented in an article in last weekend's Wall Street Journal are truly alarming.

Gun violence is up 60 percent in Baltimore so far this year compared to 2014. Homicides are up 180 percent in Milwaukee, 25 percent in St. Louis, 32 percent in Atlanta and 13 percent in New York in the same period.

Why is this happening? Mac Donald writes, "The most plausible explanation of the current surge in lawlessness is the intense agitation against American police departments over the past nine months."

That's a reference to the reactions to the deaths of Michael Brown in Ferguson, Mo., and Eric Garner in Staten Island, N.Y., last summer, and to the death this spring of Freddie Gray in Baltimore.

The narrative propagated by mainstream media, the Eric Holder Justice Department and the Barack Obama White House was that unarmed innocent blacks were being slaughtered by racist police. "Black lives matter," read the hashtag, as if most cops believed the opposite.

The facts of these cases, as revealed through competent investigations, did not support the meme. In one case in which video evidence did, in South Carolina, the policeman was quickly charged with murder by local authorities.

But the propagation of the racist-cops narrative was followed by days of rioting in Ferguson last year and Baltimore last month. The (perhaps misspoken) response of Baltimore Mayor Stephanie Rawlings-Blake: "We also gave those who wished to destroy space to do that as well."

Another response: Across the country, Mac Donald notes, "offices scale back on proactive policing under the onslaught of anti-cop rhetoric." Proactive "broken windows" policing is being replaced by non-benign neglect. The victims of the increased numbers of homicides are almost all black.

In assessing whether these developments will lead to a reversal in the amazing 20-year drop in violent crime, I want to voice a note of caution and to supply some historical perspective. The reason for caution is that so far the numbers are low. They could turn out to be just statistical noise.

As for historical perspective, I was an intern in the office of Detroit Mayor Jerome Cavanagh in the summer of 1967. Despite his near-unanimous support from blacks, a riot broke out in July after police raided an after-hours liquor joint. It continued for six nights; 43 people, some of them innocent bystanders, were killed. I remember being in the "command center" with the mayor and police commissioner, listening to cops announcing on the police radio that one square mile after another was being abandoned.

Some saw the urban riots of the late 1960s as righteous "rebellions" against racial injustice. And there was real friction: Only 7 percent of police were black in Detroit (population 1.5 million, about 40 percent black).

In comparison, Ferguson (population 21,000) and similar suburbs with rising black populations and mostly white police forces are demographically small potatoes. Baltimore, the scene of the worst recent rioting, has a black mayor and police chief and a nearly 50-percent black police force.

The idea that blacks are systematically and massively oppressed by hostile police, plausible 50 years ago, is risible today. Statistics show that the overwhelming majority of black homicides are perpetrated by other blacks.

And anyone who knows what has happened to Detroit since 1967 understands that delegitimation of policing and elite apologies for violent crime can have terrible consequences, especially for law-abiding black Americans. Violent crime roughly tripled from 1965 to 1975 and plateaued until the middle 1990s, when Giuliani and others adopted effective police tactics.

So when the president and the recently retired attorney general insist that police misconduct is a major problem, in a tone that seems to excuse rioting, they are playing with fire. The statistics that Mac Donald cites suggest that many cities and suburbs are starting to burn.

We must hope that the fire does not spread, but dies down. Perhaps it will if police resume the tactics that have proved so successful. The alternative, for those of us who have witnessed the past half-century, is terrifying.