My Mistakes About 2016 Presidential Race 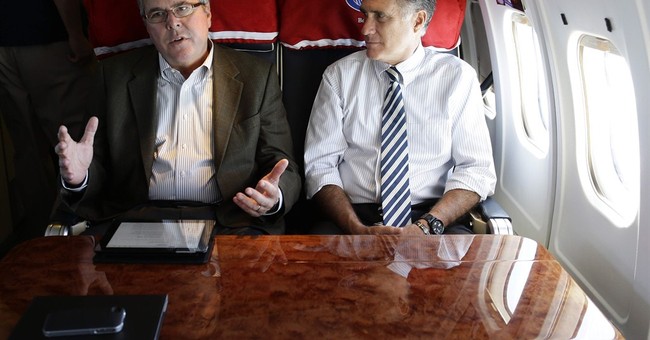 Some columnists write New Year's columns chronicling the mistakes over the last year. I don't, but as this January has rolled on, it's become clear I've made many about the 2016 presidential race.

One is that I assumed Mitt Romney and Jeb Bush wouldn't run. Now it seems both are. I thought that Romney would not mistake the affection Republicans have shown for his debate performances and now-vindicated criticisms of President Obama's foreign policy for a yearning for a third Romney candidacy. Evidently he has.

And I thought that Bush would be deterred by concerns about his family, business ties and his rustiness (his last campaign was in 2002). I thought he would be deterred by the unease over nominating the son and brother of former presidents and the overshadowing, for many Republicans, of his fine conservative record as governor by his stands on immigration and Common Core. Wrong again.

Similarly, I'm somewhat surprised that Marco Rubio and Mike Huckabee have apparently entered the race. Jeb Bush gave Rubio support when the national party establishment tried to make him drop out of the 2010 Senate race. But Rubio seems to be running nonetheless.

And Huckabee in 2008, despite his articulateness, good humor and solid debate performances, never got more than minimal support from non-evangelical primary voters or caucusgoers. It's not clear why he thinks he can do better this time.

The lesson, I think, is that potential presidential candidates make a calculation. If I run this time, especially in a cycle like 2016 in which there are many candidates and new rules, my chances of becoming president may not be great. But if I don't run, my chances are zero.

Similar calculations seem to be made by others.

Rand Paul's non-interventionist foreign policy (let's not call it isolationist) seemed a year ago to have a sizeable constituency among primary voters and the general electorate. But after Islamic State terrorists took over much of Syria and Iraq and started beheading Americans, that constituency seems to have shrunk. Paul is plugging on nonetheless.

Ted Cruz is a brilliant appellate lawyer and as articulate a debater as any politician in my lifetime. But his push for the October 2013 government shutdown did not kill Obamacare and, briefly, hurt the party by taking the spotlight off the healthcare.gov rollout. He's clearly running nonetheless.

Chris Christie seems to have weathered the Bridgegate supposed scandal. But New Jersey's fiscal and economic woes undercut his appeal, as do those pictures of his post-Sandy embrace of Obama. No problem: He was out at the Steve King-Citizens United Iowa Freedom Summit last weekend.

The big star there by most accounts was Scott Walker, who stirred the crowd by recounting his three victories over the liberal/public employee union mobs in Wisconsin and his pocketful of coupons for shopping at (Wisconsin-based) Kohl's. But he shows little foreign policy chops.

His fellow Wisconsinite Paul Ryan did bow out -- the exception, not the rule. Rick Perry comes well prepared to avoid another "oops" moment this time; Bobby Jindal speaks rapidly of faith as well as policy; Rick Santorum promises to run as doggedly as he did last time; Dr. Ben Carson speaks softly to his clamoring admirers; Carly Fiorina proclaims that she has as many frequent flier miles as Hillary Clinton but has also accomplished something.

Largely, though not entirely, missing from the debuts of the Republican candidates are detailed discussions of public policy or a set of priorities for their putative presidencies.

Congressional Republicans, if the Supreme Court rules against the Obama administration in King v. Burwell this spring, will have to grapple with how to alter Obamacare. The choices are laid out in my Washington Examiner colleague Philip Klein's e-book Overcoming Obamacare. Congressional Republicans are far from consensus and aren't getting much guidance from the would-be presidential candidates.

There's not much policy guidance either from Hillary Clinton, who currently towers above potential rivals -- Jim Webb, Bernie Sanders, Martin O'Malley -- for the Democratic nomination.

Mike Allen of Politico has a typically well-sourced preview of the Clinton campaign effort, chock full of names of experienced advisers and the 1970s singer Carole King.

But the tipoff comes in the last sentence: "Now that the architecture of the campaign is clear, the two (advisers) are helping with the next critical task: developing her message."

Oh, that. My mistake: I thought she'd have developed one by now.