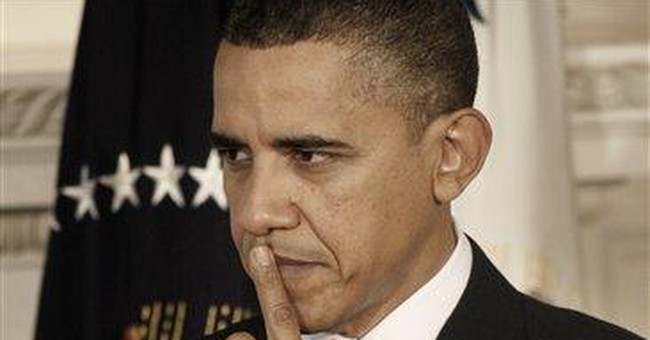 You are victims. You are helpless against the wiles of big corporations and insurance companies, and you need protection. You need the government to take over and do things you cannot do for yourself.

That is the thinking of what David Brooks calls "the educated class" that favors the Democrats' health care bills. Members of this elite spout tales of woe of people denied coverage or care with the implication that there but for the grace of government go you. So sign on, and the government will take care of everything.

It's an argument that has often been appealing to Europeans but that has always been unappealing to Americans. That's why these advocates segue to other arguments, like Barack Obama's assertion that the government can expand coverage and save money at the same time.

But voters quickly sniff out what this means. The government will use the "science" of comparative effectiveness research to achieve cost savings the only way government can: denial of care. The Soviet medical system kept down the heart disease caseload by placing cardiac care units on the fifth floor, walk up. Death panels, anyone?

In the meantime, the House, Senate and the latest iteration of the Obama health care legislation -- which is too vague for a cost estimate, according to Congressional Budget Office Director Douglas Elmendorf -- promise to eliminate Medicare Advantage and cut $500 billion from Medicare, and increase federal spending by something like $1 trillion. Obamacare Plan B would add a new layer of federal regulation on health insurance.

Why do Americans reject such policies while Europeans seem content with them? One reason is history. Twentieth-century history -- and 19th- and 18th-century history, too -- showed Europeans that they were often the helpless victims of tyrants and total war. That made them content to rely on government for security.

Americans have had a different experience. As scholars like Seymour Martin Lipset have documented, Americans are more likely than Europeans to believe that there is a connection between effort and reward. And to believe that they can improve their situation by their own hard work and ingenuity.

Americans tend to see themselves as independent doers, not dependent victims. They don't like to be told, especially by those with fancy academic pedigrees, that they are helpless and in need of government aid. That's why the politically popular American big government programs -- Social Security, Medicare, veterans' benefits, student loans -- all make a connection between effort and reward. You get a benefit because you've worked for it.

In contrast, Americans have loathed and rejected big government programs with no nexus between effort and reward. Welfare was begun in the 1930s to help widows with children, whose plight, as Russell Baker's memoir "Growing Up" showed, was often dismal. But when welfare became a mass program to subsidize mothers who didn't work and to excuse fathers from responsibility for their actions, it became wildly unpopular.

Bill Clinton recognized this when he signed welfare reform in 1996. Clinton worked his way up in Arkansas, a state with a highly unequal income distribution, with a few very rich families -- the Waltons, Tysons, Stephenses -- and many people with modest incomes. But polling shows that the Democrats' health care plans are overwhelmingly unpopular in Arkansas, even more than nationally.

Barack Obama, who has chosen to live his adult life in university precincts, sees Arkansans and Americans generally as victims who need his help, people who would be better off dependent on government than on their own. Most American voters don't want to see themselves that way and resent this condescension.

Obama hopes to embarrass Republicans at his Thursday summit and persuade Democrats to change the legislative rules and jam through a health care bill. Tactically, he's not likely to succeed. But his greater problem, on health care and other issues, is strategic. Most Americans don't share his view that they are victims, in need of protection and supervision by "the educated class."