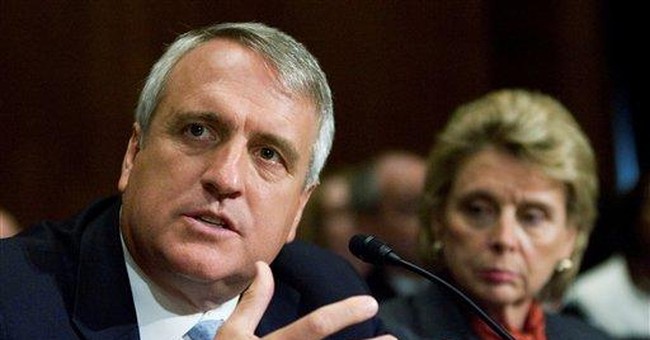 Colorado, where the Great Plains meet the Rocky Mountains, has some claim to be on the leading edge of American politics. It produced antiwar, pro-environment Democrats like Sen. Gary Hart in the 1970s, Reaganite Republicans like Sen. Bill Armstrong even before Ronald Reagan won in 1980, Clintonesque Democrats like Gov. Roy Romer in the 1980s, and National Review's favorite Republican governor, Bill Owens, in the 1990s.

In this decade, a group of liberal multimillionaires -- Tim Gill, Rutt Bridges, Jared Polis and Pat Stryker -- developed "the Colorado model," not only funding candidates, but setting up think tanks, advocacy groups and public relations operations designed to oust Republicans and install Democrats.

As Fred Barnes pointed out in The Weekly Standard last year, this Colorado model has been a brilliant success. Democrats captured both houses of the legislature and a Senate and House seat in 2004, the governorship in 2006 and a Senate and House seat in 2008. Colorado, which voted for George W. Bush by 8 points in 2000 and 5 points in 2004, voted for Barack Obama by 9 points in 2008. It was a fitting conclusion to a campaign in which Obama accepted his nomination in front of Greek columns in Denver's Invesco Field.

But now, Colorado seems to be going in the other direction. Gov. Bill Ritter, elected by 17 points in 2006 and seeking another term next year, is trailing former Republican Rep. Scott McInnis in the polls and runs only even against a little-known Republican state legislator. Michael Bennet, appointed by Ritter to fill Interior Secretary Ken Salazar's Senate seat, has a negative job rating and runs well under 50 percent against Republican opponents.

Barack Obama's job rating in the state has been conspicuously below his national average -- closer to those of still rock-ribbed Republican Rocky Mountain states than like the hip states of the Pacific Coast.

Campaigning, it turns out, is easier than governing. The Colorado model folks could target particular legislators, taking one out for her strident opposition to same-sex marriage, beating another with the support of horny-handed labor union operatives. Out of office, Ritter could gush with enthusiasm about alternative energy sources and Obama could eloquently promise hope and change.

In office, thing have gotten stickier. Ritter enraged union leaders by vetoing their pet legislation, then risked alienating suburbanites with an executive order empowering public employee unions. Limited by Colorado's taxpayer bill of rights, he imposed higher fees on car registration, but at the same time has had to order big spending cuts.

Obama has been able to sidestep national labor leaders' card check bill, which would effectively abolish the secret ballot in unionization and impose federal wages and work rules on employers and employees. But his vast increases in federal spending and his budgets that promise to nearly double the national debt as a percentage of gross domestic product, up to World War II levels, and the various Democratic health care plans have inspired unease in Colorado as elsewhere.

At least one Colorado Democratic congressman has announced he won't hold town meetings on health care because people don't really know what they're talking about. Another, from a liberal Boulder-centered district, voted against the health care bill in committee because of the supertax on high earners, which he argued, would stifle economic growth and innovation.

Colorado is just one state, with nine electoral votes, and, like every other state, not typical of the nation. It is the state with the lowest rate of obesity and quite possibly the highest level of physical fitness, perhaps because most of its citizens live a mile above sea level. The oscillations of its politics seem driven more than elsewhere by baby boomers who flocked there in the 1970s, in the heyday of Hart and Patricia Schroeder. The poll numbers suggest they found Democrats an attractive protest vote in the George W. Bush years but find them less palatable now that they are putting their policies into practice.

These voters may appreciate an openness to same-sex marriage and give lip service to preserving the environment, but they don't seem to cotton much to higher taxes and fees, a significantly enlarged government and greatly strengthened labor unions.

The Colorado model showed how dedicated leftists could produce victories for Democratic candidates. It doesn't seem to have been as useful a guide for how those Democrats, once elected, could govern in a way that produces sustained public approval.