M.D. Kittle
|
Posted: Aug 19, 2020 11:16 AM
Share   Tweet
The opinions expressed by columnists are their own and do not necessarily represent the views of Townhall.com. 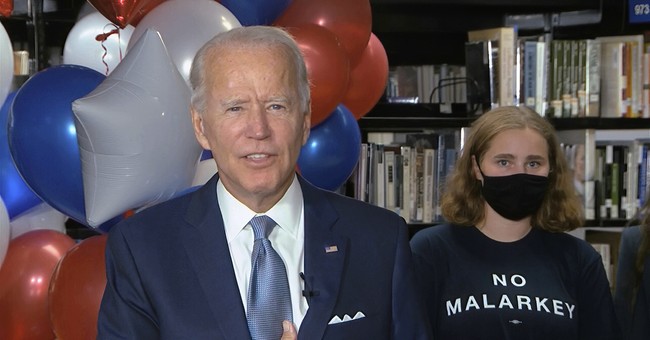 The nearly all-virtual coronation of Joe Biden seems to be just about everywhere but Milwaukee — the host city for the Democratic Party’s national disappointment. Bernie isn’t there. Nancy isn’t there. Joe’s not there, although, that can be said of both Biden’s geographic and cognitive positions.

Dems went all-in on the COVID WILL KILL US ALL!!! narrative, so they had no choice really but to ditch the troubled Wisconsin city that was supposed to rise from the ashes like a Phoenix thanks to the infusion of 50,000 convention Democrats.

Nobody but the worst liars in the party are claiming the Zoom convention is anything but a pale replacement for the real thing — like Tony Evers succeeding Scott Walker. It’s hard to “feel the energy” of a “unified” party when convention-goers are stuck on mute somewhere between Modesto and Delaware.

Even the Democrats’ public relations firm, the mainstream media, is dour. NBC News’ description of the convention’s opening day read more like a lament than a party.

"The elimination of the in-person convention was the latest body blow to a city that had been overhauling its infrastructure in preparation for a huge year set to bring in billions in revenue. Music festivals and sporting events here have been canceled. The hometown Bucks, a contender for the NBA championship this year for the first time since 1971, cannot play in front of their fans."

Don’t just take our word for it. The suckage was felt by many.

“This could’ve been a moment for Milwaukee to really shine. And now it’s associated with all the negative things,” Kerri Huelsbeck, general manager of the Courtyard by Marriott in Milwaukee’s downtown told NBC. “It just kind of sucks.”

“Fox News Sunday” host Chris Wallace said the first-half hour of the convention “felt more to me like a telethon than it did like the national convention that we’re used to seeing.”

“The PBS telethon vibes are so strong that the DNC is about to throw in a free tote if you call in a pledge the next five minutes,” Daily Beast reporter Scott Bixby tweeted.

“This feels more like a sad telethon than a rousing call to arms. I get the limitations of the format, but man this is slow so far,” CNN host S.E. Cupp tweeted. She went on to note that only @RepGwenMoore added 60 seconds of “much-needed energy.”

Maybe spellcheck mistook embarrassment for energy. Moore has been known to embarrass the Badger State at many public events and she did not disappoint in Monday’s cringe-worthy monologue. Mercifully, the DNC only gave the liberal shill 60 seconds.

“Today, we gather virtually. However, we gather unified in spirit, unified in our values and purpose to heal divisions and together move the nation confidently into a prosperous and inclusive future,” Moore read unconvincingly from a teleprompter.

Her words sounded like just about anything but an apt description of a political party being devoured by the radical left.

Milwaukee Mayor Tom Barrett, surely glum that he doesn’t get to don his engineer’s cap and take liberal out-of-town pals on his expensive pet project streetcar, tried to save face.

“This was the day we were hoping to welcome 50,000 people and seeing and upwards of $200 million for our economy,” Barrett said Monday during a virtual press conference.  “A lot has changed, but one thing that hasn’t changed, and shouldn’t change, is the pride of winning the convention. This was a big deal.”

And all Barrett and Milwaukee’s left have left is a dull participation medal.