DC's "Hardest Working Man" Is Model for GOP Success in 2016 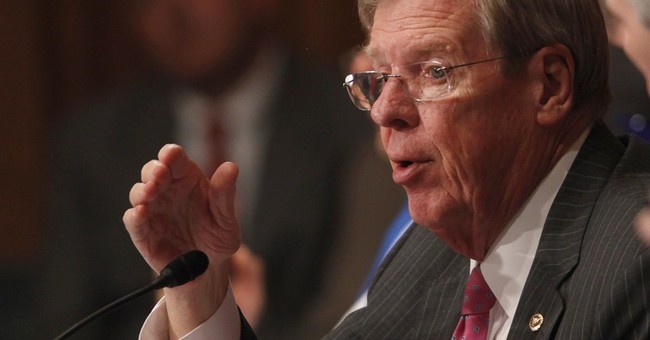 Many Americans likely don't know the name Johnny Isakson. He's not the type to ever push his name into the limelight. But insiders on Capitol Hill know him, and it's no secret that Georgia's senior senator is everyone's "go-to" person when it comes to producing concrete results and to promoting the conservative agenda in a businesslike and respectable manner.

Isakson, who was sworn into office in the Senate in 2005 along with, among others, then-Sen. Barack Obama, has rocketed up in seniority. He now is the only member of the Senate to serve as chairman of two committees. One of those in itself is a handful: Veterans' Affairs. The other one could at any time become a full plate, too: the Ethics Committee. Add to that Isakson's seat on both Foreign Relations and the powerful Finance Committee and you get an idea that this is one busy guy.

But there are plenty of busy people in Washington. What makes Isakson an important role model for Republicans who will be seeking to keep control of the Senate and capture the White House in 2016 are the other attributes that have made him reportedly the most popular member of the Senate. He's also a man who is held in highest regard by both Republicans and most Democrats in his home state.

Isakson was likely named to chair the Ethics Committee thanks to his no-nonsense, businesslike and ethical approach to everything he has ever done. That includes running a large Atlanta-based real estate company as a private citizen, serving in the Georgia legislature and later as successor to Newt Gingrich in his Congressional seat.

Gingrich made it clear to his friends that he wanted Isakson to win the election held to replace him after Newt resigned from Congress. He later publicly endorsed Isakson, who won the race by a whopping 40 points.

Ironically, Gingrich had been cool toward Isakson in earlier years, considering him to be too moderate on many issues. But in the more immediate years leading up to his departure from Congress, Gingrich came to know Isakson as not only a solid Republican and conservative, but also as a solid man.

Newt Gingrich's assessment proved to be on target. If Newt wanted a conservative to follow in his footsteps, he got what he wished for. Isakson followed Gingrich's conservative approach in the House and later in the Senate, where National Journal ranks him the seventh-most-conservative member.

In a recent Atlanta Journal-Constitution article, the biggest names in Georgia's Democratic Party essentially said they thought no one in the state could defeat Isakson for reelection next year. The state's last Democratic governor, Roy Barnes, said he, too, would be a Republican if everyone in the state GOP were like Isakson.

That's not likely because Barnes agrees with all of Isakson's conservative positions. It is more likely that Barnes, who served with Isakson in Georgia's legislature years ago, recognizes Sen. Isakson's ability to keep a cool head, listen to all sides of an issue and make a fair decision on all types of issues.

What many independent voters don't like about the Republican image is just that -- its image. They view Republicans as brusque, knee-jerk and polarizing. Of course, with a mainstream media that never really lets voters see just how polarizing and knee-jerk the current administration and other Democratic leaders are, it's hard for Republicans to get a fair break.

But if the GOP wants to attract independent swing voters in '16 while still staying true to the party's conservative philosophy, they need to search for and hold on to candidates like Johnny Isakson.

In the end, it's the genuine nature of the man that makes him so popular both at home and in Washington. Isakson is the type of elected leader who is never too busy to help out constituents or to return on weekends to the same Georgia home he has lived in with his wife since the 1970s.

Republicans would do well to follow the lead of the hardest-working man in Washington.