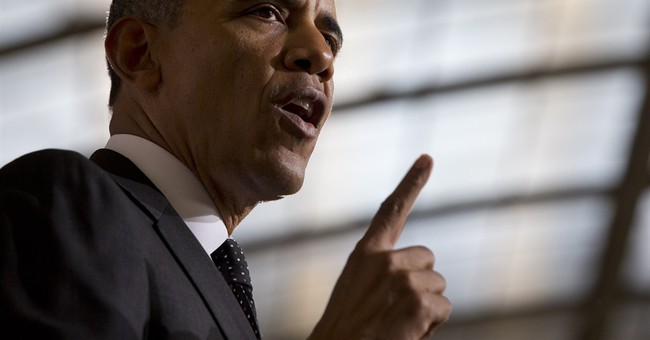 Trending
If anyone believes that this nation is truly left of center, they should consider a new poll coming from the usually administration-friendly CBS News. Their polling unit reports that a majority of Americans are disappointed in President Obama and give him lousy ratings for his handling foreign policy and the economy.

But perhaps the biggest failures of this administration have yet to be recognized by most voters. The average American has no idea how many executive orders have been issued to set in place the president's agenda or how many new changes in rules and regulations this administration is pursuing, many of which will have a profound impact on the lives of millions in the future. Just consider the "minor" move the administration is advocating that would place millions of seniors taking ant-depressants at risk of no longer receiving the specific medication chosen by their own doctor to deal with a serious problem.

Shifting medicines, upping regulations and creating red tape has been a hallmark of the Obama years. But now comes the next major blunder. President Obama is proposing a substantial reduction in our military that could reduce our troop levels to the lowest since 1940.

Perhaps the only person who should take comfort in this is former President Jimmy Carter, who has forever been the butt of jokes and comments for having allegedly dismantled our military during his years in office. I have noted before, Carter did make reductions, but his actions were not as drastic as those proposed by Obama. Moreover, Carter served admirably in the Navy and was never thought to have an intuitive bias against all things military. I do not doubt that Carter, in his years as president, believed that America was indeed exceptional.

And there are some points of fairness to be given to the administration's position. The argument that we must beef up our ability to protect against cyber-attack is real and persuasive. And sometimes the innovations that come from shifting from manpower-driven efforts to those of technology do pay off. Even Carter's years led to the development of what became drone technology. And it should be added that cuts Carter made occurred while the nation was in the grips of an inflationary and dismal economy.

But Obama's cuts come in the middle of what he would have us believe is a great economic recovery. Which begs the question of what impact Obama's newest military proposal might have on what is truly an already jobless recovery.

Still, it seems that the president and his team are ignoring the so often repeated notion that "those who fail to remember the past are doomed to repeat it." It was less than 25 years ago that Saddam Hussein chose to occupy Kuwait and force the U.S. to deploy troops in a massive operation. And just years earlier, the Soviet Union was still intact and the threat of armed conflict was an ever-present part of a Cold War.

Are we sure another resurgence of a Soviet-like power is not in the making? Can we be sure that other nations, seeing weakness, test our will and might in years to come?

Yes, conflicts in the world are more complicated and yes, our nation has likely committed too many troops into too many wars where an ultimate victory proved temporary at best.

And no, I do not agree with Dick Cheney's comment that we should cut food stamps rather than troop levels. That simply sounds so callous and only puts an angry and ugly spin on an otherwise reasonable concept that we can make other cuts in many areas, rather than reducing our troop levels.

Imagine that in the very same week he learns that most Americans consider his presidency a disappointment. Barack Obama decides to press forward with this added effort to dismantle America's strength.

It's looking more and more like in his mind, the only thing exceptional about America is Barack Obama.