The Unfair Attack on Charlie Black 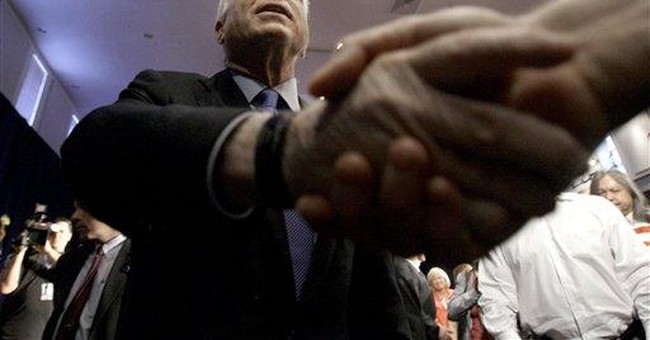 Let's get one thing straight. Last week, our polling firm, InsiderAdvantage, released a poll for the Southern Political Report and this syndicated column that showed Barack Obama and John McCain tied in Georgia.

The news from this generally Republican state triggered quite an uproar, and I'm sure the poll won no praise from the John McCain camp.

The combination of a high African-American population, many young voters, plus the presence of former Georgia Republican Congressman Bob Barr's name on the ballot as the Libertarian candidate all were contributing factors in the Georgia surprise.

I'm not taking sides in the presidential race. My job is to call things as I see them. That's what leads me to some comments on the current attacks on one of McCain's top advisers, Charlie Black.

Black recently gave an interview in which he stated the obvious -- that should America suffer another terrorist attack, it would be "a big advantage" to the McCain campaign.

Immediately, pundits and opponents called for Black's head on a platter. They continue to push for his resignation, even after Black apologized for the remark.

Now let's be honest here. Just as I unabashedly believe that our poll about Georgia being a new "battleground state" is correct -- as did the panel on NBC's "Meet The Press" last week -- I also believe this Charlie Black issue is nonsense.

Black did not say he wanted another attack on America. Moreover, he was repeating a campaign strategy concept that both Barack Obama and Hillary Clinton acknowledged in a debate during the battle for the Democratic nomination.

Black is a strategist, and he was giving a political strategist's opinion. Was it wise? Perhaps not. Was it something that requires resignation? Give me a break.

Now organizations are alleging that Black has lobbying ties as well. That's another joke. There is hardly anyone who has been around politics who hasn't directly or indirectly been involved in advocacy for clients. It's how they manage to feed their families.

What is really going on here is a shrewd effort by the supporters of Barack Obama to try to drive away the most seasoned veteran in the McCain organization.

Charlie Black knows more about presidential politics than 99 percent of the pundits and operatives in the political world of 2008.

For Republicans who hunger for the Reagan years, they get it in Black, who worked with the "Great Communicator" himself. Those who wish that George W. Bush's years had turned out more like his father's can also look to Black, who was there with President Bush "41."

You can't fault the Obama camp or those who support him for their efforts to turn a molehill into a mountain and force Black out. It's smart politics. But you can question some journalists who have pounded the issue past what should have been a 24-hour news cycle event only.

And here is the true irony. Has anyone challenged the concept that an attack, heaven forbid it should occur, would actually help a McCain effort? For my money, Charlie Black is about as smart and savvy as they come in an otherwise rather talentless GOP world of political hacks. But it may well be that a tragic act of violence against America might have the opposite effect than what he believes.

First, no one knows how President Bush and Vice President Cheney might react if we were attacked. This poor president, who I now feel is being abused beyond any justifiable level, can hardly take any measure without dropping in the polls. And any perceived mistake on his part would be guilt by association for McCain.

Second, should an attack happen early enough in the election cycle, there would be plenty of time for experts and politicians to find a way to blame the GOP for the event having taken place.

Black was merely repeating the conventional wisdom that Democrats have already acknowledged. If he is at fault, it's in his belief that this notion of terrorists "helping" Republicans is unquestionably true, not that he commented on the possibility.

There have been gaffes from the Obama team, and I would never have believed that there would be cause for anyone to step down. And John McCain is showing a great character trait -- loyalty -- in standing by Charlie Black.