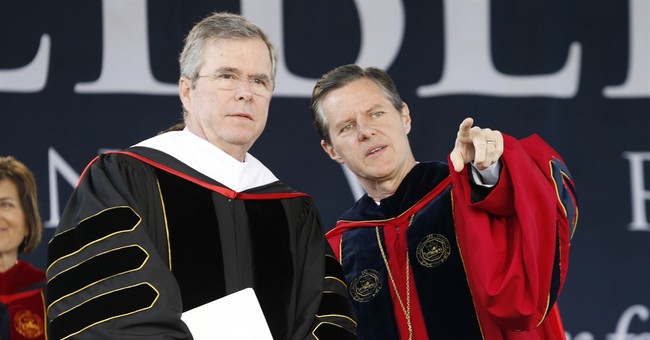 Graduation season is upon us. Be it middle school, high school, college or graduate school, now is a time of joy and celebration for millions. From coast to coast, graduates, faculty, family and friends are gathering, or soon will, to celebrate academic achievement and years of scholastic seed sowing. It’s a time of reflection and hopeful anticipation as those who have earned the distinction “alumni” prepare to reap hard work’s harvest and traverse the winding path ahead.

I love the graduation ceremony. As a law school educator, I’m re-charged each year by the electric expectation that hangs in the air. It clings, like so much static, to baggy gowns and dangling tassels as young and old laugh, cry, hug and high-five. For some, the job hunt now begins. For others, it’s on to the next level of learning.

Graduation time is also a time for thankfulness. With plenty to go round, grateful grads bathe in appreciation, and deservedly so, parents, family, faculty and staff for the sacrifices of time, energy and financial resources so that they might reach this important milestone.

Still, for many, there is one person above all to thank. He is Christ Jesus, God incarnate and Savior of the world. As it was with me, without Him, they would not have made it.

And so thank Him they do.

Yet as surely as the stink bug infests Virginia in May, spring brings with it a swarm of secularist bullies in the public schools. At once agitated and aided by left-wing extremist groups like the ACLU, Freedom From Religion Foundation, Americans United and People for the American Way, these anti-Christian segregationists seek to remove God from graduation altogether and intimidate His faithful into silence.

But try as they may, and succeed briefly they oft do, this annual campaign of religious cleansing is frequently stopped dead in its tracks when Liberty Counsel, one of the nation’s fastest-growing civil rights law firms, shows up with a colossal can of constitutional RAID. This band of Christ-serving attorneys works day and night to ensure that prayer and religious viewpoints are not suppressed during public school ceremonies.

To that end, Liberty Counsel is now launching its thirteenth annual “Friend or Foe” Graduation Prayer Campaign. The campaign serves to protect religious viewpoints at graduation and, from a legal standpoint, educate the educators as to what they can and cannot, must and must not do.

In a precedent-setting case against the ACLU that went all the way to the Supreme Court, Adler v. Duval County School Board, Liberty Counsel defended the right of students to pray or give religious messages at graduation. The case established the legal principle that public schools are free to adopt a policy that permits students or other speakers to present either secular or religious messages, including prayer, at commencement ceremonies.

“Despite what the secularists want you to believe, students do not lose their constitutional right to free speech when they step to the podium at graduation,” observes Mat Staver, founder and chairman of Liberty Counsel. “To allow a variety of viewpoints except religious viewpoints at graduation is religious hostility and unconstitutional. While schools should not force people to pray, neither should schools prohibit them from praying. If they do, Liberty Counsel will act quickly and decisively to defend the students.” (Liberty Counsel has published a free legal memo on graduation prayer. Make sure your school administrators, faculty and staff get a copy.)

What this means is that in every public school across America – from grammar school through post-graduate – student speakers have an absolute constitutional right to pray and/or share their faith from the podium, whether such sentiments are written in prepared remarks, or uttered ex improviso. This includes leading others who may wish to participate in prayer.

And those who don’t?

So, if any administrator attempts to censor a student speaker’s remarks by redacting references to God, Jesus, faith or religion, or by otherwise prohibiting student-led prayer, then that administrator is in violation of the law. He or she, whether deliberately or otherwise, has trampled the First Amendment.

It happens every year. School officials hostile to religion, most especially the Christian religion, begin spouting the mythological “separation of church and state” talking points spoon-fed them by the aforementioned secularist organizations. This disinformation campaign has had tremendous success over the years and so we must set the record straight.

That’s what Liberty Counsel is doing.

If you know of any graduate being told not to pray, not to lead his or her fellow public school graduates in prayer, or otherwise being told not to share his or her faith from the podium (assuming that graduate has earned a role as a student speaker), then please call Liberty Counsel at 1-800-671-1776 or email them at Liberty@LC.org to file a report.

Let’s give these anti-Christian stink bugs a mouthful of constitutional bug spray.

And, graduates, congratulations. We’re proud of you.