We Are Not ‘All God’s Children’ 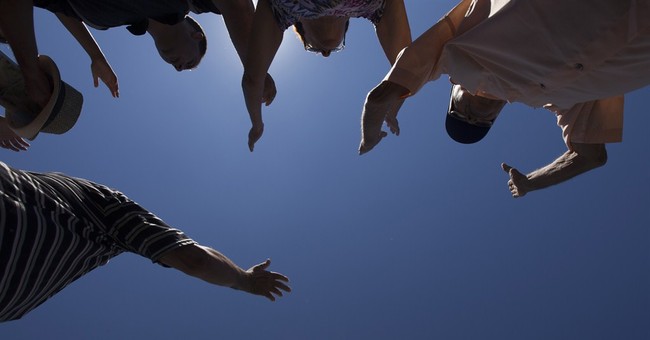 You’ve heard it said that “We are all God’s children.” This rings flowery and nice.

Indeed, God both created and loves – in a way most unfathomable – everyone who ever lived. He wove us together in our mother’s womb and numbered our every hair. But God the Father has only one begotten Son. The rest of us, in order to become one of God’s children, must be adopted – in, by and through – the One Who is the Son: Jesus Christ. Those who are not adopted are not children of God. Christ and Christ alone is “the way, the truth and the life.”

Indeed, to become a child of God, we must ask God – through Christ – to adopt us. We mustn’t just believe upon Him – for “Even the demons believe that” (see James 2:19) – but, rather, we must also accept Him. We must follow Jesus, the one true God, as our only God. “But to all who believed him and accepted him (Jesus), he gave the right to become children of God.” (John 1:12)

Don’t believe? Don’t accept? You have no right to become a child of God.

I’m not here to question God. I can neither fully understand nor explain why what He says is so. I can only convey to you that He unmistakably, unequivocally and without stuttering, says it is so.

The postmodern concept of religious pluralism is likewise an insidious lie. It’s a relativist tool of deception, dreamed up the greatest of all deceivers. It’s a false religion – jazzed-up paganism – propagated by the rulers, the authorities, the powers of this dark world and the spiritual forces of evil in the heavenly realms (see Ephesians 6:12).

Merriam Webster defines “pluralism” – in the context of which I refer – as “a theory that there are more than one or more than two kinds of ultimate reality.”

The goal of pluralist philosophy is to muddy the waters and divert mankind from the “narrow gate” that leads to eternal salvation (Jesus), while, at the same time, herding them along the “broad road” to eternal damnation (anything and everything that denies the singular and exclusive deity of Christ – or that rejects the certainty that He alone can save us from hell).

Pluralism is a non-starter. It’s inherently self-defeating, contradictory and, frankly, just plain stupid. Pick your “ism” – be it progressivism, socialism, Hinduism, Buddhism, communism, Marxism, atheism, et al. – and central to each you will find the leavening lie of pluralism.

Each of the world’s major religions fundamentally contradicts the other. They cannot all be true. Either one is true or none is true.

Jesus said, “Enter through the narrow gate. For wide is the gate and broad is the road that leads to destruction, and many enter through it.” (Matthew 7:13) Again, Jesus alone is that “narrow gate.”

Here’s the thing. You can deny Christ until the day you die. But after that, you will deny Him no more. Hate Him you may still, but deny Him you will not. Philippians 2:10-11 assures us, “that at the name of Jesus every knee should bow, in heaven and on earth and under the earth, and every tongue confess that Jesus Christ is Lord, to the glory of God the Father.”

John 3:36 warns: “Whoever believes in the Son (Jesus) has eternal life, but whoever rejects the Son will not see life, for God’s wrath remains on him.”

Christ is both tolerant and intolerant – utterly exclusive and wholly inclusive. He said in no uncertain terms: “I am the way and the truth and the life. No one comes to the Father except through me.” (John 14:6)

Universalists, atheists, pluralists and other followers of false god’s and religions, take note: Jesus, rather conspicuously, did not say: “No one comes to the Father except through me, the Buddha, Muhammad, Ganesh or L. Ron Hubbard.”

The narrow gate to heaven is utterly exclusive.

Yet Christ also promised us this: “Come to me, all of you who are weary and carry heavy burdens, and I will give you rest. Take my yoke upon you. Let me teach you, because I am humble and gentle at heart, and you will find rest for your souls. For my yoke is easy to bear, and the burden I give you is light.” (Matthew 11:28-29)

Romans 10:13 is even more direct: “Everyone who calls on the name of the Lord will be saved.”

The narrow gate to heaven is wholly inclusive.

If religious pluralism is true, which it cannot be, then Jesus is a liar. And if Jesus is a liar, then Carl Sagan was right when he said, “The Cosmos is all that is or was or ever will be.”

Thank God Jesus is not a liar.

Still, some apostate, celebrity mega-church pastors like Rob Bell have become wealthy calling Jesus a liar. They teach the heretical doctrine of “universal salvation,” which suggests that, ultimately, everyone ends up in heaven – even those who rejected Christ while here on earth.

Bell and others like him claim that “we’re all God’s children.”

This is a pseudo-Christian form of religious pluralism that may well condemn untold millions – to include celebrity mega-church pastors like Rob Bell – to the unimaginable horror of eternal separation from God. (Rob, brother, I pray that you’ll repent posthaste and ask Christ’s forgiveness for both your heresy and for leading your flock to slaughter. He’ll forgive you, just like he’s forgiven me for all the crap I’ve pulled over the years.)

And the Truth will set you free.

Romans 8:1-2 promises: “Therefore, there is now no condemnation for those who are in Christ Jesus, because through Christ Jesus the law of the Spirit who gives life has set you free from the law of sin and death.”

By logical extension, the converse is true. There is condemnation for those who are not in Christ Jesus. Until and unless you believe upon, accept and follow Jesus – you remain imprisoned under the law of sin and death.

Unconvinced? You don’t have to believe to quietly pray this simple prayer to yourself: “Jesus, if you’re out there, please reveal yourself to me. If you’re real, help thou my unbelief.”

If I’m right – if Jesus is not a liar and He is who He says He is – then you have nothing to lose and everything to gain by inquiring further.

If you don’t inquire further, you have everything to lose.