The Torch and the Sword: Fiorina and the Right Kind of Feminism 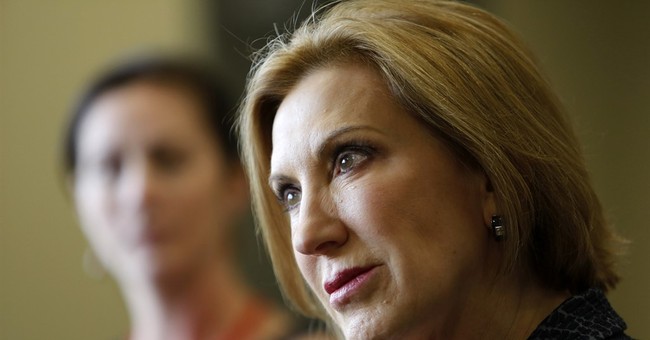 I didn’t expect much from the debates last week. These forums are poorly designed and provide very little insight into each candidate’s character. They are little more than a performance, and the last thing our country needs is another performer who can’t act.

However, I do try to anticipate surprises, good things and little opportunities to wonder. Carly Fiorina evoked my wonder on Sept. 16, and that is something I did not expect. You might call me a feminist, but of an ironically nontraditional nature: I actually like being a woman and enjoy the very obvious differences between men and me.

In line with this sort of feminism, before the debate, I did not want to see a woman in office. Too many women are trying to be men these days. I am saddened by the descent of the masculine spirit and the surge of the femi-masculine force, but as Fiorina stood on the stage the other night as the only woman and spoke more clearly and directly than her fellow debaters, she prompted me to reconsider.

Fiorina did not convince me that she is free from this femi-masculine trap, but she offered some of the strongest rhetoric on stage, and she did so with a concision and grace that seems uniquely feminine. She displayed a knowledge both particular and universal, as well as the wisdom to know their relation to each other, for example, by relating ISIS and national security to Planned Parenthood and the security of our country’s character.

In her final remarks of the debate, she gave her audience clear images, images that viewers’ senses could grasp and their minds could contemplate — Lady Liberty and Lady Justice, the torch and the sword. She silenced Donald Trump’s hollow wealth-talk with just a few aptly chosen words. And she let that unexpected silence do its work on everyone in the audience.

Throughout the evening, Fiorina was herself an image of wit and calm, responding to the moderators’ questions (such as they were) with a mixture of fire and elegance that was quite something. When I thought about this, about her sensitivity to the real issues and her desire “to challenge the status quo” (to steal a line from Fiorina herself), I realized that a woman might be a great gift to our country today.

Women are meant to be, by nature, receptive, and in the act of receiving, they actualize the gift of others. In the medieval tradition, women are peacemakers, able to sense the underlying causes of contention and bring about unity. They are life-bearers, given a sacred duty, a privilege we no longer celebrate. They are not better than men, and yet by their femininity, they sometimes lead men to fuller masculinity.

Realizing that they are the only ones equipped to provide protection, men rejoice in the vulnerability of women. The simplicity and complexity in the relationship between the sexes might become muddled in our minds, but we should be aware of its role in this nomination, in the conservative party, and in our nation today.

Ultimately, we need more than fuller masculinity or femininity. It is fuller human beings that we need, and a woman might be the right kind of human being to help bear that life into our culture. A woman could bring us back a bit closer to our humanity.

After all, who were Esther, Tamar and Ruth? I recalled these women from the Bible who walked into a room or into a city and, by their beauty and reason, saved entire nations from death. I do not mean to place Fiorina on the same plane, but I found it helpful to see that women have played a powerful and unique role in history. I am a bit ashamed at my lack of hope in my own sex.

Of course, these are merely my reflections from one debate. As I noted already, a few hours of good performing shouldn’t be enough.

Plato knew that even the most persuasive rhetorician might be an ill-intentioned one. It is what underlies image and rhetoric that makes someone true and good. I worry that Fiorina will make the mistake of trying to be a political man — rather a political woman — and that she will close herself off in a corner of coldness and pith.

The statesman and the stateswoman bear the same duties, but should carry them out quite differently. So we are left with questions. Is Fiorina a stateswoman or merely a performer? And is she courageous enough to be a real woman — with all the vulnerability and love and power that entails?

I suppose we’ll have to wait and see whether the torch and the sword appear again.