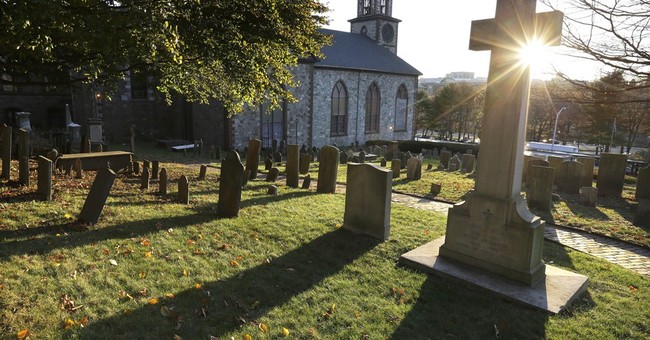 Dr. Alex Lickerman, former director of primary care at the University of Chicago, wrote recently, “I’m always surprised by people who say they’re not afraid to die. … Though I can imagine there are indeed people who, because of their age, character, or religious beliefs, truly do feel this way, I’ve always wondered if that answer hides a denial so deeply seated it cannot be faced by most.”

He continued, “Certainly, this has been the case with me. I love being here and don’t want to leave. … Whenever I’ve tried wrapping my mind around the concept of my own demise—truly envisioned the world continuing on without me, the essence of what I am utterly gone forever—I’ve unearthed a fear so overwhelming my mind has been turned aside.”

Such honesty is rare. Novelist Walker Percy wrote that a standard secularist lives “as if his prostate were not growing cancerous, his arteries turning to chalk, his brain cells dying off by the millions, as if the worms were not going to have him after all. [He] works, grows old, gets sick, and dies and is quite content to have it so. Not once in his entire life does it cross his mind that his situation is preposterous.”

“Washington Post” columnist Robert Samuelson downplays elderly panic. He contends, “If you’re dissatisfied, frustrated or downright miserable, cheer up. There’s apparently a cure for you. Even better, it will materialize automatically. Just sit and wait; the very anticipation of its arrival might improve your spirits. The remedy: getting older.” Samuelson’s proof is public opinion polls: “Almost 40 percent of Americans 65 and older rated themselves ‘very happy’ compared with only 33 percent of those 35 to 49.”

“Atlantic” journalist Jonathan Rauch contends happiness has a U-curve, with “life satisfaction falling for the first couple of decades of adulthood,” bottoming out in the late 40s or early 50s, “and then, until the very last years, increasing with age.” Rauch offers more evidence: Zookeepers, researchers, and other animal caretakers found that 500 captive chimps and orangutans suffered middle-age depression but became happier as they became elderly. Rauch concludes that human distress or happiness results partly from “the biology we share with closely related great apes.”

To me, that’s true only if we turn down our brains like the sheets in hotel rooms. Sure, great apes may feel sadness when their mates die, but we have no indication that, Lickerman-like, they contemplate the possibility of their own nonexistence. Unless we die suddenly like the Germanwings passengers early this spring, we face the dissatisfaction of those “very last years.”

Lickerman realizes secularism’s inadequacy. He has been a practicing Buddhist for 26 years but doesn’t claim it works: “One of the supposed benefits of manifesting the life-condition of the Buddha is freedom from all fear. I’ve tried to resolve my fear of death intellectually and come to the conclusion that it can’t be done, at least not by me.”

Can others merrily face nonexistence? Howard Nemerov, poet laureate of the United States, died of cancer in 1991, soon after writing that “no rational being … holds on to the inveterate infantile hope that the road ends but as the runway does.” The gospel hope, though, is that cars turn into planes: The God who created the universe out of nothing can make us fly. And if we have no runway, all we have is Lickerman’s despair.

Some hymns show the right attitude: “Through eternity I’ll sing on, I’ll sing on.” So do some catechisms: The Heidelberg from 1563 declares that our only comfort in life and death is that we belong to Christ, who “assures me of eternal life.” So do some historians of Christianity: Yale scholar Jaroslav Pelikan said just before he died, “If Christ is raised, nothing else matters. If Christ is not raised, nothing matters.”

As usual, a psalm says it best: “You guide me with your counsel, and afterward you will receive me to glory. Whom have I in heaven but you?” (Psalm 73:24-25).

Reprinted with permission of WORLD. To read more news and views from a Christian perspective, call 800-951-6397 or visit WNG.org.
'Justice was Served': Loudoun County Student Found Guilty of Bathroom Sexual Assault
Landon Mion
Dave Chappelle to Transgender Community: 'I Am Not Bending to Anybody’s Demands'
Landon Mion
Biden Jokes to Elementary Schoolers That His Job is to 'Avoid' Answering Questions from Reporters
Landon Mion
Father of Loudoun County Sexual Assault Victim Demands NSBA Apologize for Labeling Him a Domestic Terrorist
Landon Mion
Another Large Migrant Caravan Is Heading Towards the US: 'Tell Biden We Are Coming'
Julio Rosas
Two D.C. Police Officers Were Reportedly Told to Have Abortions to Keep Their Job
Madeline Leesman