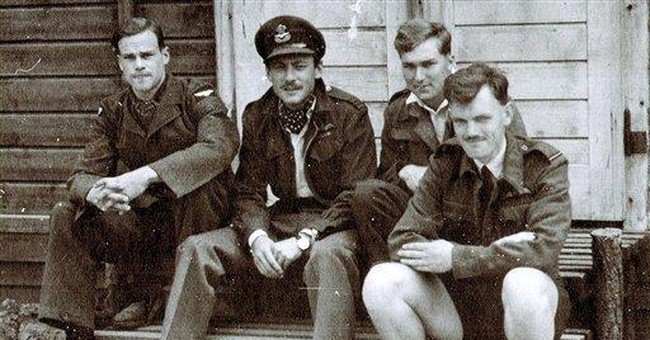 Seventy years ago—July 23, 1944—signs suddenly appeared at prisoner of war camps in Germany: “ESCAPE FROM PRISON CAMPS IS NO LONGER A SPORT.”

Those signs meant the Gestapo had murdered 50 escapees from Stalag Luft III. A terrific film you might watch this summer, “The Great Escape” (1963), commemorates that heroic-turned-tragic adventure. Let’s review the reality, the movie, and the metaphor.

The reality: A 33-year-old British air force squadron leader, Roger Bushell, organized the great escape. As “Big X” of the camp escape committee, he proposed that the prisoners dig not one but three tunnels—Tom, Dick, and Harry—so if prison guards discovered one, others could be continued.

Bushell’s goal was 200 escapees. When warned that embarrassed Germans would take revenge on those caught after such a large foray, he said, “Everyone here in this room is living on borrowed time. By rights we should all be dead!” It was to fight Nazis to the utmost, he added, that “God allowed us this extra ration of life.”

Guards discovered one tunnel, but 76 prisoners got out through another. Only three eventually made it to freedom outside Germany, and Bushell was one of the 50 shot, contrary to the Geneva Convention. After the war, 21 Germans eventually paid for this war crime (and others they had committed) by forfeiting their own lives.

The movie: Great characters include Capt. Virgil Hilts, played by Steve McQueen, who tries escape after escape and ends up each time in solitary confinement, tossing a baseball against a wall. The prisoners enjoy camaraderie as they find devious ways to fool their common enemy, the German jailers, and they also sacrifice themselves for each other: Hilts goes out individually and lets himself be caught so he can bring back information that will make possible the large escape.

The philosophical question of the movie comes in dialogue between “Roger Bartlett,” the character modeled on Roger Bushell, and “Group Captain Ramsey,” the limping senior British officer at the camp, modeled on Stalag Luft III’s real-life Herbert Massey, who had lost half his leg. Ramsey asks Bartlett concerning his massive escape plan, “Have you thought of what it might cost?” Bartlett responds, “I’ve thought of the humiliation if we just…knuckle under and crawl. Surely, you don’t advocate that, do you?”

Ramsey then points out that Stalag life could be worse: “No matter how unsatisfactory this camp may be, the High Command have still left us in the hands of the Luftwaffe. Not the Gestapo and the SS.” Bartlett responds, “You talk about the High Command and the Luftwaffe, and then you talk about the Gestapo and the SS. To me, they’re the same!…the common enemies of everyone who believes in freedom.”

Ramsey lets the escape go on, and later tells a survivor reeling from news of the murder of 50, “Roger’s idea was to get back at the enemy the hardest way he could, mess up the works.…He did exactly that.” Asked the hard question—“Do you think it was worth the price?”—Ramsey responds, “Depends on your point of view.”

The metaphor: C.S. Lewis in “Mere Christianity,” which he developed as BBC radio talks during World War II, wrote, “Enemy-occupied territory—that is what this world is. Christianity is the story of how the rightful king has landed, you might say landed in disguise, and is calling us to take part in a great campaign of sabotage.”

Up until World War I, many in England and America were postmillennialists. Viewing Europe’s material progress and general peace, they thought a great society was coming—and Christ would then return and reign. World War I killed most of that sanguinity and a repeat 21 years later wiped clean the rest. Those who read Lewis could readily believe that Satan, by God’s leave, dominates this world like the Nazis for four years ran Europe. The Christian task is to mess up satanic works.

I have no indication that the screenwriter and director of “The Great Escape” were applying Lewis, but I cannot avoid doing so: We are called to spiritual guerrilla warfare. We may die in the process, but we’ll say to Christ what another captured escapee says to Bartlett a moment before they die: “Tunneling kept me alive. I’ve never been happier.”