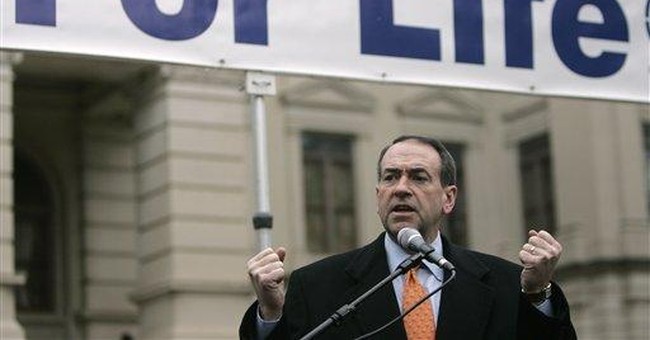 Mike Huckabee has not been able to pick up much support beyond his evangelical base, but there's a way for him to do so. He needs to show that Christian conservative views and small government views logically go together.

The key is realizing that growth in governmental "human services" has come in part through the recognition of real problems. When a guy and a gal shack up, it's not purely a personal matter. That's because one result, a certain percentage of the time, is likely to be a child with a single mom, and that child at some point is likely to receive governmental support.

Or look at divorce: When children are involved, a judge's custody decision determines where they should live, where they should go to school, and sometimes what language they should speak. The kids are at physical risk: the growth of governmental child protection agencies parallels the surge in broken families. Even kidnapping cases usually result not from "stranger danger" but from the decision of the left-out parent to regain rights extra-legally.

Overall, family non-formation or malformation leaves kids more likely to mess up in school or drop out. Teens with an absent parent are more likely to commit crimes or get pregnant. They are more likely to have mental and sometimes physical health problems. All of this leads to bigger government. The drive to expand governmental health care of children owes much to the growth of uninsured children in single-parent homes.

And the big debate on health care availability and costs? The price escalation has come in part because of increased longevity and the use of expensive technology, but also because of unhealthy life styles. As waistlines expand, so do the budgets of government health agencies and the calls for Washington action to rein in costs or improve medical access to the U.S. poor, who suffer more often from obesity than from hunger.

Libertarians tend to favor gay rights and same-sex marriage, but those also lead to bigger government. Ave Maria University Professor Seana Sugrue has pointed out that the same-sex marriage movement is a subset of a sexual revolution based in liberty, but liberty "achieved through the empowerment of a state with the strength to destroy sexual norms." Since referendum after referendum has shown that most people do not favor same-sex marriage, it requires overreaching courts to decree it, and propagandistic schools to get students to see as normal what most instinctively recognize as weird.

Libertarians rightly relish the theme throughout American history of government ordaining and individuals disdaining. But what happens when individuals or their churches believe that homosexuality is wrong? Gays need strong governmental action to keep people from speaking out against it. They need criticism of homosexuality to be declared "hate speech." They need government to force religious organizations to hire gays or facilitate adoption by gays.

This "small government requires social conservatism" argument is not a 10-second soundbite, but Huckabee in speeches could explain that a conservative position on social issues contributes to a conservative position on fiscal issues: Individuals who are family-reliant and God-reliant are rarely government-reliant. He should also insist that same-sex marriage be opposed only in ways that treat gays as still possessing human dignity. He should assert that anyone who says "I'm righteous and you're not" has an inadequate view of sin.

F. Scott Fitzgerald in the "The Great Gatsby" nailed selfish folks who ignore the need to balance individuality and community. He wrote about careless rich people who make messes and leave the cleanup to their servants. Today, the rich and especially poor often leave the cleanup to government officials. If we want fewer officials, we need to reduce the number of messes. Social