Tarring Conservatives With The Brush of "Domestic Terrorism" 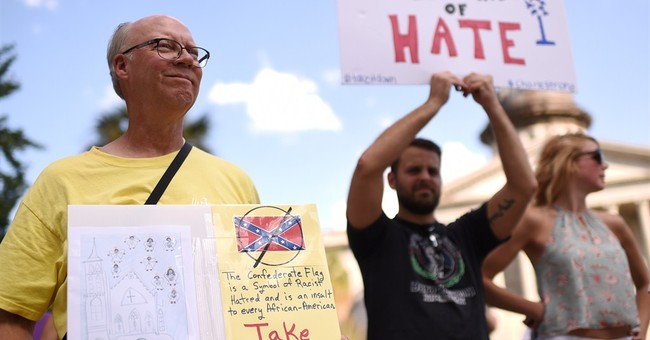 There is already a rush to call Dylann Roof’s murder of nine black churchgoers in Charleston an “act of domestic terrorism.” This is a deliberate political strategy, intended by its ultra-liberal authors to transform this terrible tragedy into an indictment of American conservatism.

“Terrorism” is a slippery term to define. Under U.S. law, terrorism is defined as "the unlawful use of force and violence against persons or property to intimidate or coerce a government, the civilian population, or any segment thereof, in furtherance of political or social objectives.” This is a perfectly good legal definition for the lawyers, but it still requires parsing key terms like “intimidate” and “in furtherance of political and social objectives.”

I prefer a variation of Supreme Court Justice Potter Stewart’s famous definition of hard-core pornography, “I know it when I see it.” Well, I don’t see it in this instance. For example, when the PLO hijacked cruise ship Achille Lauro and then shot Leon Klinghoffer, an American citizen, as he sat in his wheelchair and proceeded to dump his body into the Mediterranean, that was unambiguously an act of terrorism. When 19 operatives from al-Qaeda hijacked four civilian airliners and proceeded to fly them into the Twin Towers of the World Trade Center and the Pentagon (and crashing the fourth plane into the ground in Pennsylvania after passengers heroically fought for control of the aircraft) that was unambiguously an act of terrorism.

How is Dylann Roof’s insane act of multiple murder different from these examples above? Well, to go back to the legal definition, the PLO and al-Qaeda operations were carried out in furtherance of clearly articulated political objectives. The PLO sought the destruction of Israel, and al-Qaeda seeks the establishment of an Islamic caliphate, among other things. Roof’s incoherent racist ramblings do not constitute a political program that could be established by violence or any other means, they’re just raw inchoate hate-filled emotions.

And I believe there is a conspiratorial and organizational element necessary for an act of terror to qualify as terrorism. No doubt Roof’s murder of those nine poor souls was an act of terror, but it was an individual act of madness rather than an act in furtherance of a cognizable goal. Both the PLO and al-Qaeda expected tangible results and had an organizational infrastructure to try to capitalize on their acts of terrorism. Roof got in his car and fled to North Carolina and was promptly arrested. And his notions of starting a “race war” were nothing more than insane delusions.

In today’s New York Times, Morris Dees of the Southern Poverty Law Center argues that the murders in Charleston are an integral part of “the growing globalization of white nationalism,” and an act of “far-right domestic terrorism.” Now, Dees is an attorney whose organization raises a lot of money peddling stories about widespread, dangerous and powerful white supremacist groups. In his piece in the Times, he cites the white nationalist American Freedom Party as a prime example of a shadowy movement standing behind Roff somewhere in the shadows.

Well, the American Freedom Party ran a candidate for President in 2012, who garnered all of 2,707 votes nationwide. And if you assume that in any election, 1% of the voters randomly choose any minor party on the ballot as a protest vote, it’s hard to imagine that the “American Freedom Party” as much more than some marginal fruit-loops with a website. To ascribe any real significance to such groups is to also believe that the Workers’ Socialist Party (Trotskyist) is about to take over the telegraph offices and the airfield as a prelude to a revolution.

So, sure, of our 350 million citizens, a few nutcases are white supremacists. And Trotskyists and other assorted cranks. And some of these nutcases have morally repugnant views, which are by the way constitutionally protected in our republic. That does not by itself make them terrorists. And so far at least there is no evidence to suggest that Roof had the support of anyone else in carrying out his dreadful deeds.

But I believe that there is a deeper political agenda behind the rush by Dees and other ultra-liberals to label Roof’s actions “terrorism.” Correction: agendas. There are some on the left who want to smear conservatives with an indictment of “supporting terrorism.” After all, it is a short and direct line from opposing affirmative action to white supremacism to Dylann Roof, right? And there are others who would like to draw some sort of moral equivalency between Islamic terrorist activities and Roof’s actions, and by extension with those conservatives adamant in their condemnation of Islamic extremism. Radical Islamacists kill people, Dylann Roof is a white American who killed nine black people, ipso facto, how is radical Islam that different from White America, right? I think that’s the underlying logic being pushed by some, for cynical political advantage.

By painting Dylann Roof’s insane act of horror as “domestic terrorism,” some ultra-liberals are trying to tar conservatives with the same brush, even if only indirectly and by implicit suggestion.