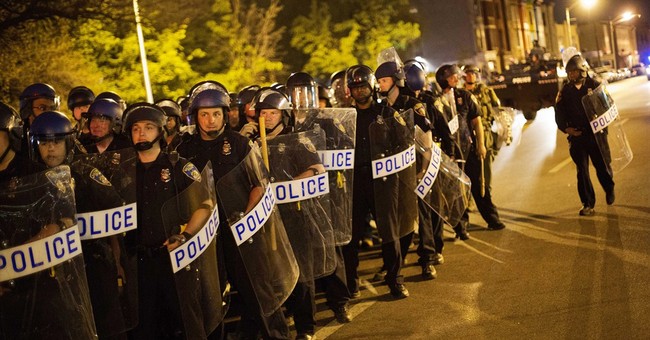 The citizens of Baltimore are suffering from violent street riots, and The New York Times is exploiting Baltimore’s agony to publish a call for yet more violence and to promote its dishonest and pernicious leftist political agenda.

There is no question something went wrong on April 12 when Freddie Gray was arrested by Baltimore police. And if the police used improperly excessive force causing his fatal injuries, they should be prosecuted under the law. But for the Times, this tragic event is yet another opportunity to slander the men and women who are the “thin blue line” between civil order and criminal anarchy, and to blame America for the violent behavior of street thugs. In the Times’ op-ed pages this week are a variety of opinion pieces that clearly exhibit the combination of dishonesty of the ultra-liberal left and the naive gullibility of their admirers among more garden variety liberals. But one piece stands out for its malicious mendacity.

In Baltimore, We’re All Freddie Gray, opines a certain D. Watkins. The D may stand for Dwight, or Demond, but Drug Dealer or Dirtbag might be more appropriate. According to “D” the police in America go around harassing and beating African-Americans for no reason whatsoever. Gray was “viciously attacked by police officers on April 12 more or less because he looked at them.” That sounds like a law abiding citizen peacefully minding his own business, and then arbitrarily put under arrest because some racist police thugs thought he looked at them the wrong way. Well, “D” fails to mention that Gray had a long rap sheet for various criminal offenses, including felony drug dealing, and was arrested in a neighborhood area plagued with drug-related criminal activity.

“D" is from Baltimore, and he really does not like the Baltimore P.D. “To us, the Baltimore Police Department is a group of terrorists, funded by our tax dollars, who beat on people in our community daily, almost never having to explain or pay for their actions.” He goes on the explain how he has experienced first hand thuggish mistreatment at the hands of the Baltimore police force. “When I was 10, a group of thugs kicked in the door to my home, knocking it off the hinges, looking for drugs. They held my family and me at gunpoint for hours while they tore our house apart. When they left my mom called the cops; they arrived two hours later, treating us as if we were the crooks and complaining about writing the police reports.”

What “D” fails to mention (no doubt unintentionally) is that he used to be a Baltimore heroin dealer, something he boasts about in his other scribblings. I guess if I was dealing skag, I might also have negative feelings about the police. So unless he was declaring his drug dealing income to the IRS, his “tax dollars” were not “funding police terrorism.” He also has written how even as a child he had the impression drug dealing was a perfectly fine way to earn a living (and much better paying than legal employment).

So thugs kick in the door to his home and hold his family at gunpoint for hours. Jeez, that kind of sounds like “terrorism” to me. And the thugs were looking for a valuable drug stash. I can’t imagine what kind of horrible racist reasoning would make the police suspect that perhaps some member of the Watkins family was engaged in illegal drug activity.

“D" ends with a political manifesto. “We are all starting to believe that holding hands, following pastors and peaceful protests are pointless. The only option is to rise up, and force Mayor Rawlings-Blake to make what should be an easy choice: Stop protecting the livelihoods of the cops who killed Freddie Gray, or watch Baltimore burn to the ground.” I hesitate to use the term lynch mob because of its terrible historical resonance, but a lynch mob is exactly what “D” is calling for: deprive the police accused of killing Gray of due process of law, or we will burn the city to the ground.

The Times should hang its head in shame for publishing this hateful and dishonest screed. Failure to disclose “D’s” prior record as a heroin dealer calls into serious question the truthfulness of his assertions about the Baltimore police. And by hiding this fact, “D” conveniently is also able to direct attention away from the real threat to the inner-city community in Baltimore: people like him. He was making fast bucks by selling a deadly addictive drug to his fellow citizens, a drug whose use destroys both the lives of those addicted to it, the lives of their families, and the fabric of the entire community.

It is the difficult and unenviable job of the police to stop or at least control this vicious trade, as well as the other forms of criminality that plague our inner cities. But for the ultra-liberal Times, gangsters and thugs are romantic heroes to be celebrated, and lawmen struggling to keep the peace the villains. Their irresponsibility is a disgrace to honest journalism, and a disservice to our nation, especially to the law-abiding citizens of Baltimore.