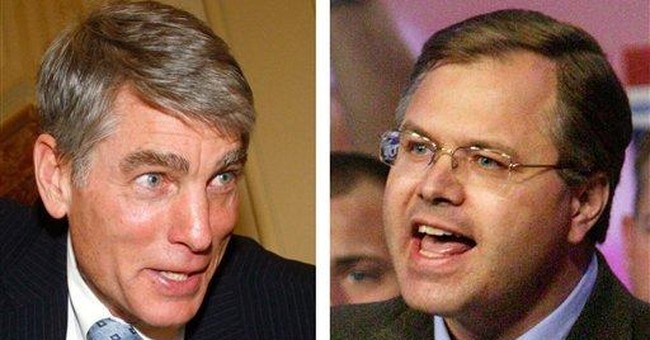 Mark Udall's message to Colorado voters is crystal clear: just tell me want you want to hear, and I'll say it.

"We've got to produce our own oil and gas, right here in our country," he says in a new commercial paid for by his U.S. Senate campaign.

Just what we need: another politician who will sell his soul to attain higher office.

Over the years, Udall's record on domestic energy production has been much more dogmatic than pragmatic, more extremist than centrist. He's voted to:

€ Block drilling for American oil in Alaska or off shore at least nine times.

€ Deny tax deductions for production of U.S. oil and gas, thereby putting American companies at a financial disadvantage versus their competitors in the Middle East, Russia and South America.

€ Declare oil cartels like OPEC to be in violation of U.S. antitrust law, even though most high school seniors - not to mention Members of Congress - are smart enough to know that our laws do not apply to foreign oil companies.

€ Oppose making abandoned military bases available for construction of new oil refineries, oblivious to the reality no new American oil refineries have been constructed since 1976, increasing our dependence on foreign refineries.

The Denver Post described Udall's U-turns as "sharp turnarounds for a man who has made the expansion of renewable energy a cornerstone of his career." The Politico, a Washington, D.C.-based journal, called the flip-flop "a clear shift from his previous opposition to such measures."

So, Colorado voters who are fed up with $4-a-gallon gasoline should ask themselves: Why does Mark Udall now claim to support domestic production of oil and gas? And does he truly mean it?

The most obvious answer to the first question is polling. In June and July, Udall held as much as a 10-point lead over his opponent, former Congressman Bob Schaffer. That lead nearly evaporated in two recent surveys.

Sixty percent of Coloradans tell the Wall Street Journal poll that they're "more likely" to support a candidate who favors easing restrictions on drilling. A Rasmussen poll shows 65% of Coloradans want to make increasing energy production the top priority over reducing energy consumption.

As to the sincerity of Udall's conversion, only the commercial paid for by his senate campaign backs him up. All other evidence suggests that this is a poll-driven conversion of political convenience.

Udall's campaign website dwells on developing wind and solar power but says little about developing new sources of oil and gas. Instead, Udall falls back on old liberal canards: "we cannot drill our way to energy security" and "not every place that can support oil drilling should be drilled."

Consider, also, Udall's five-point plan to address rising gas prices. Four points do nothing to increase domestic energy resources. A fifth supports drilling off the shore of Cuba but is contained in a Udall-sponsored bill that hasn't even received a congressional hearing since it was introduced over a year ago.

If Udall were serious about developing domestic energy, wouldn't he have demanded a vote on his own bill before allowing Congress to take its summer vacation? Instead, Udall was campaigning in Colorado when a vote to consider a genuine domestic energy bill fell short by just one vote.

Finally, it would be foolish not to acknowledge that Udall's wife spent 20 years working for Sierra Club, whose webpage features a petition congratulating Speaker Nancy Pelosi for adjourning without bringing oil exploration to a vote.

Mark Udall hasn't changed his stripes. That's great news for his liberal base, but it's bad news for Coloradans who want affordable gas prices.