No “Lone Wolves,” No “Home-Grown,” No “Self-Radicalized”

Mark Davis
|
Posted: May 25, 2017 12:01 AM
Share   Tweet
The opinions expressed by columnists are their own and do not necessarily represent the views of Townhall.com. 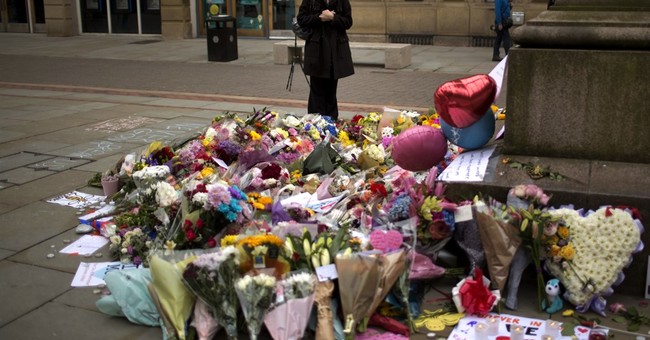 The post-Manchester analysis festival is under way, with all parties occupying predictable bandwidths. Conservatives are using the concert bombing as evidence of the dangers of insufficient attention to Muslim migrations, while liberals engage in posturing designed to limit the damage to their already flagging reputations on national security.

As details dribbled out of yet another jihadist plying his murderous trade in Europe, Sen. Chris Murphy (D-CT) took to CNN Tuesday with his list of concerns. Did they include beefing up American resolve to identify and root out Islamists in America? Was there a call for increased European vigilance?

Not so much. One of Murphy’s main worries is the absurd leftist lament that speaking truth and taking bold action are actually counterproductive, giving ISIS “recruitment fodder.”

“Many of us are worried about some of the rhetoric of the Trump administration, because we worry that that, combined with robust online recruitment might end up in an attack like this happening in the United States."

Good Lord. If anything energized ISIS, it was eight years of feckless Obama leadership vacuums. Now we have a president interested in actually speaking and acting against Islamic terror, and the left suggests such realism will spark the next ISIS bombing in America.

This is not a new trick. Obama-style engagement always taught that terrorists would bend to nebulous diplomatic overtures, seasoned with a smattering of sanctions. Liberal processing of terror threats also yielded a dictionary of diversionary terms designed to lure Americans away from conclusions that are kryptonite to Democrats, such as sober recognitions that evil exists and must be fought.

Some of these terms, keenly hazardous in their capacity to distract, have cropped up in the aftermath of the Manchester attack. They should never be spoken by anyone serious about addressing jihadist terror.

The first is “lone wolf,” a term intended to deceptively suggest that terrorists are unconnected individuals amazingly hatching similar plans by happenstance.

The second is “home-grown,” an adjective designed to disguise the connection between all jihadists and the Middle Eastern cauldrons that boil with the hate that inspires them.

The third is “self-radicalized,” a false depiction of terrorists as spontaneously combusting with visions of innocent victims to kill, requiring no external accelerant.

So, to be clear, in recalling Manchester, Paris, Brussels, San Bernardino, Orlando, Nice, and other Islamist-inspired acts of terror:

There are no “lone wolves.” Every jihadist killer is part of a murderous network strung together by the webs of hate and lunacy taking instruction from Islam’s most violent layers.

There is no such thing as “home-grown.” A terrorist born and raised in the country he attacks (as in the Manchester example) did not absorb his evil motivations from the culture of his European or American roots. It all traces back to the dank caves of Mideast Islamism.

There is no such thing as “self-radicalization.” This is perhaps the most noxious card in the left’s deck of deceit, a fraudulent attempt to conceal where radicalization comes from: Islam’s bloody dark side.

Every terrorist event is an opportunity to rediscover lost clarity on what we are up against. No one should overstate the threat or paint with overly broad brushes of accusation. But we must reject those who dismiss or minimalize the daunting menace of global jihad by playing word games in a politically correct campaign of denial.