Mark Davis
|
Posted: Sep 12, 2016 12:01 AM
Share   Tweet
The opinions expressed by columnists are their own and do not necessarily represent the views of Townhall.com. 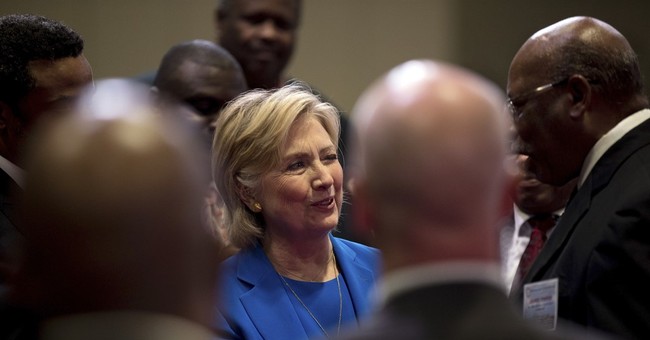 Show of hands: How many of you are buying the pneumonia diagnosis?

This is the plight that befalls us. A campaign that will lie so habitually about matters as weighty as national security will effortlessly make stuff up to cover for the frightening imagery of her collapsing into the arms of aides as she was rushed from the 9/11 memorial ceremony.

Let’s be clear. She may indeed have pneumonia. She may well have suffered from “overheating” and “dehydration” as her doctor later explained. But would you bet anything of value on the reliability of that story?

We are now asked to bet America’s future on it.

We are asked to believe that, after a litany of coughing fits and a lethargic campaign schedule, she is just fine and there is nothing to see here. And maybe that’s true. And maybe it’s not. Shall we roll the dice?

To me, the prospects of a Hillary Clinton presidency are not a gamble. Gambling involves a possible upside. If she wins, we are endangered in so many ways that even the counting becomes painful. But even facing that, I have not been calling for a big focus on her health as a campaign issue. I have thought it looks a little desperate, as if we weren’t confident enough of making the simple case that Donald Trump would make a substantially better President.

I still don’t want Trump spouting off about this so much. The media are actually covering it, and the story resonates on its own. If he shows restraint and simply wishes her a full recovery, it scores double points, denying his critics a chance to blister him for opportunism while reinforcing the broad etiquette that you should ease up on someone who is really sick, which she may really be.

That said, even the highest standard of manners still provides an avenue for condemning the repulsive insult she leveled at millions of American voters Friday, placing half of Trump’s supporters into the now-infamous “basket of deplorables.”

“Irredeemable,” she called them. “Not America.”

Then, on Saturday, came the apology, which should be soundly dismissed. Here is a rule I apply to people who say disgusting things and then immediately backtrack. The thing they said revealed their heart; the apology is phony, driven by the panic of realization that they messed up.

(Consistency check: When Republicans say things that are cruel or stupid and immediately walk them back, I apply the same rule. But Trump provides a special case; his missteps have never been intentionally hurtful as Hillary’s were. He simply has a mouthy adolescent trapped inside him that occasionally blurts things out. This is real, but it is miles from the literal hatred Hillary has spewed onto half of the sixty-some million people who will vote for him.)

So as we approach the eight-week countdown to November 8, Hillary has revealed two things that are among the most damaging factors she could face: an ugliness of demeanor that even further buries her personal likability, and an episode of sickness that will properly trigger a wave of new scrutiny as to whether we have been as misled about her health as we have been about her e-mails, the Clinton Foundation and Benghazi.

There are two angles to this story as the new week unfolds. One is the necessary common ground we should all occupy in genuinely wishing her a full recovery and good health moving forward. I have always said I wish for the Clintons (and the Obamas, by the way) many decades of happiness and health in the private sector where they cannot screw up my country any longer.

But there is a necessary political component as well. The presidency is demanding. It ages its occupants at a heightened pace, as any pairing of entry and exit photos will attest. This is of particular pertinence when the opponents are either approaching 70 as she is, or have reached it, as he has.

It is a thoroughly valid inquiry to probe deeply into the truths of Hillary Clinton’s health. That inquiry will face the same smokescreens that have met various other attempts to learn truths about her. If there were no unsettling video of her slumping into the arms of staffers, is there any doubt that this story would have been successfully smothered by now, by her campaign and its willing media handmaidens?

Let various voices from the medical and punditry communities weigh in as these next days pass. As for Donald Trump, he should just be out there hitting the resonant themes which have boosted his poll numbers this month. Hillary is under doctor’s orders to “modify her schedule,” which could mean we may scarcely see her until the first debate September 26.

Trump should fill those days with his usual vigorous pace of appearances, and it might be a good idea if a couple of those were outdoors with temperatures somewhere above the high seventies that struck down his opponent.