Warning: This Column Is In English 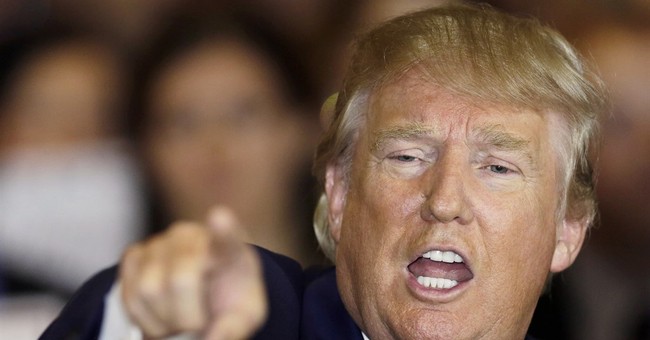 Just wanted to make sure I didn’t come across as a racist, nativist xenophobe. That is, after all, the attack that awaits anyone suggesting primacy for the English language in a country founded and made great solely by people speaking that language.

How do we know? Because Donald Trump, in another moment of resonant genius, suggested Jeb Bush should campaign in English for a job that is won by attracting voters, all of which speak English.

Of course we have populations struggling to learn English, and a proper bilingual bridge helps them on that journey to English proficiency. But far too many people in our nation insulate themselves in a bubble of their native tongue, making little or no effort to assimilate linguistically.

The Trump drill is now familiar. He says something that not so long ago would been self-evident, like “Illegal immigration is bad,” and a national freak-out follows, from natural opponents on the left and from establishment elites in the Republican party who are scared to death of such truths.

So here we go again. Bush insulted Trump in Spanish, and Trump struck back in English, with a suggestion that Jeb might be a little too accommodating of folks who lean on the mother tongue rather than melding into an English-speaking American functionality.

Because lies are reflexive to them, liberals (and even some frightened Trump critics right of center) began to mischaracterize and exaggerate Trump’s intent. Jeb Bush himself comically asked whether the man who is pummeling him in the polls would “close all the foreign language classes.”

Welcome to America 2015, where suggestions of deporting lawbreakers are marginalized as fringe ravings, and assertions of favored status for English are condemned as intolerant.

Love or hate the Trump phenomenon, his bluntness sparks discussions no other candidate could ignite. Imagine any of his rivals announcing last month, “Hey, let’s have a national conversation about the eroding status of English as a unifying force for all Americans.” It’s pure crickets and tumbleweeds.

But now, fueled by the jet engine of Trumpism, we will have that conversation. Just as we have widely discussed sanctuary cities and deportation and a border wall, not because Chris Christie or Scott Walker or even Ted Cruz wanted to shoehorn those topics into dinner table chat, but because Trump made proclamations that struck a chord with millions of Americans who would not even be paying attention to campaign issues this early but for him.

This leads to a truth we should all grasp sooner rather than later. Smart people have stopped saying a Trump derailment is a sure bet. Who knows how far this thing will go? But if the wheels do shoot off, don’t spend a ton of time wondering where his voters will land.

Cruz is a fair bet, as is fellow novice Ben Carson. But the foremost answer to “Where will the Trump voters go?” is “nowhere.” They are plugged in not because they have suddenly decided to shop the GOP field; they are paying attention because he commands it. Lose him, and many of those poll numbers and potential voters will simply vanish into the familiar fog of apathy.

Which is why conservatives should hope for Trump-mania to last as long as it can. While it may not be a vast grooming ground for future conservative voters, it is luring millions of fairly apolitical, moderately-engaged citizens into debates and news stories where Trump (and others who choose to) are actually talking about getting tough on immigration, standing up to China, rebuilding the military and hammering ISIS. It is not bad for that messaging to hit the ears of millennials, independents and blue-collar folks who have answered the Trump call.

And because of that mix, we should also realize that it is a largely useless exercise to blast Trump’s conservative credentials. His appeal does not hinge on batting a thousand on an issues list. It runs on an engine of his personality, which has made even grassroots supporters and tea partiers smile.

Their logic: Trump may be a tax-raiser on the mega-rich, and he may fall short on a couple of other usual conservative bullet points. But if he can actually do the things he is talking about doing, actually fighting for the things our candidates are usually too afraid to even discuss honestly, then they will take it and be happy.

The unifying power of the English language is another institutional truth that has been steamrolled by decades of insufficient attention to our basic values. Generations of Republican candidates have paid lip service to those values but watched them slide to the precipice under their watch as the left chalks up victory after victory on its path to “changing America.”

Maybe we’ve had it up to our eyeballs with change. Maybe it’s time to rediscover some things we should not have loosened our grip on.

A national discussion on English is a helpful thing, even if some of it takes place in the foreign languages of countless people who have come to our country. Learning English is incredibly hard, but inarguably necessary if one is to fully participate in the American story.

Among the people demonizing Donald Trump for taking that stance: La Raza and Jeb Bush. That should be all you need to know.