Donald Trump: The Gift That Keeps On Giving 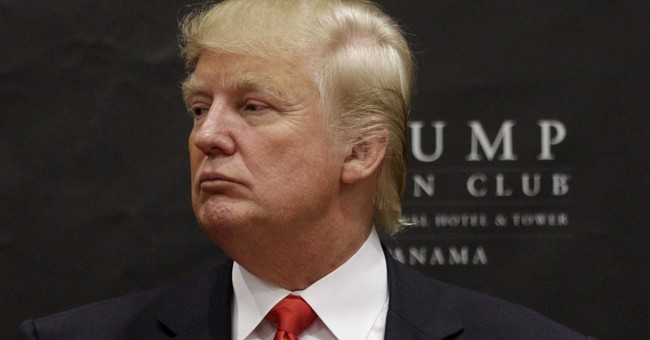 It’s hard to know which is the more engaging hobby of late: evaluating the latest burst of news from Donald Trump’s world, or tracking the contortions from those on the left and right scrambling to react.

Speaking purely as a talk show host, this is the greatest summer festival since Woodstock, and no one needs to risk the bad acid to take the trip. Just plug in to the daily developments from the Trump campaign, and watch as two categories of reactions ensue. One involves anxious voices on the left trying to use Trump’s brashness as a weapon against the Republican brand. The other is a chorus of Republican voices damaging themselves in their haste to berate or distance from the Trump phenomenon.

What a ride. Let’s deal with the simpler one first. Liberals are enjoying the Trumpfest because they think they will be able to spread his negatives across the broad landscape of Republican candidates.

This will not work for two reasons. First, Trump’s negatives are stylistic, not ideological. Americans not fond of Trump are not recoiling at his positions on issues; they are blanching at his approach, his bluntness, his ego. In this regard he is uniquely Donald, and there is no such thing as a voter saying “Trump is a little too reckless for me, so I can’t support Scott Walker.”

Second, there is no basis for singling out one candidate in any race to insist that a lone voice somehow defines an entire field. Are Hillary Clinton and her already forgotten other rivals defined by Bernie Sanders?

In fact, there is danger in a Democrat attempt to spread the Trump aura across the remaining GOP candidates— it could help them. Think there aren’t a few other candidates who would like to peel off a piece of Trump’s double-digit poll numbers? The smart ones are studying him closely, not to emulate his every move, but to understand why he is a singularly compelling force.

Which brings us to the other category of Trump reactions, the ones from the right. I can understand how highly prepped, highly handled, cautious, play-by-the-rules candidates can get their worlds rocked by Hurricane Donald. But if any of these folks is going to deal with a nuclear Iran, they had better figure out how to handle Trump.

And the simple answer is: let him go. Refuse to be part of the skittish ranks tripping over each other to speak ill of him, as if that is beneficial.

It is the opposite. For every voter-listing Trump as their favorite, there are probably five who favor someone else but who thoroughly enjoy his directness and fearlessness. Any Republican candidate lining up to hammer Trump for perceived insensitivities gains no points, and probably loses a couple for seeming nervous and snippy.

There is dispute over whether RNC Chair Reince Priebus told Trump to “tone it down” this week. Let’s settle that moving forward. Priebus is a good man who shows the occasional hint of talent that compares favorably to the previous underwhelming decade of party chairs. But if he has a lick of instinct about the 2016 primary voter, he should learn immediately that we want not one peep of a party chair telling candidates what or what not to say or do. We will handle that, thank you. The candidates doing things we like will be rewarded with successes in actual elections, while those not meeting our needs will feel the sting of failure at early state ballot boxes.

Where will Trump figure in all of this? It’s impossible to know today, but you can feel electricity as voters anticipate Trump taking to the first debate stage August 6 among a top tier of candidates who had planned a smooth evening of slipping pre-written memorable lines in among predictable questions.

Trump changes everything that night. He has already changed everything. He has smoked out the candidates who fear him, and that has not been encouraging. The notion that he is guilty of some xenophobic slur is an outright lie. Any idiot knows his rapist reference was amid a rant on the crimes of illegal immigrants, a theme that resonates loudly as Kate Steinle’s family prepares to lay her to rest.

One of the Republican Party’s biggest problems is its inability to explain to Hispanic voters why strong immigration laws are wise for all Americans. The tongue-tied coddling of recent years has suppressed the enthusiasm of Americans longing for a solution to our porous borders. Trump has given those voters at least one voice willing to build a wall, deport lawbreakers, punish sanctuary cities, and take on any TV network that doesn’t like it.

So precisely who is mystified by his appeal?

It is as if people believe that acknowledging Trump’s attributes equates to an endorsement. America is filled with people who probably expect to go with Rubio, Walker, Cruz or some other big name, but are thoroughly enjoying Donald’s current show.

And unlike “The Apprentice,” this show is for real. Of course there is a circus atmosphere to Trump-mania: his larger-than-life bombast will probably keep it that way, and the ride may grow weary for some voters down the road.

For now, he represents many things most candidates are not. He is courageous where others are cautious. He is direct where others mince words. He is a fighter while others appease. He gets in the faces of the dunderheaded media culture while others plot how to suck up. He strides boldly while others tiptoe.

So precisely who is mystified by his appeal?

One does not have to resonate with that appeal, but denying it or reacting snark towards it (as some conservatives have done) is evidence of simply not getting it.

The Trump phenomenon is not built on millions who absolutely, positively want him to be President, even though that number is larger than many will admit, and grows every time some TV channel or store or celebrity bashes him. His numbers are fueled by people who are pleased to find, at last, characteristics too long lacking from our candidates and even some of our actual nominees through the years: an attitude that says “This is what I believe; If you like it vote for me, and if not, see you later.”

That attitude exudes confidence and strength. Most GOP voters would like to see those attributes in our more conventional candidates, and some will display it in some form and to some degree.

But for now, the gift of Trump is that there are issues on the table no other candidate could have shoehorned into the national debate, and there is a campaign road ahead likely to be energized and clarified by his presence. Any candidate made uncomfortable by the Trump phenomenon may well be telegraphing an inability to cope when things get unpredictable— not a strong selling point for anyone wishing to sit in the Oval Office.