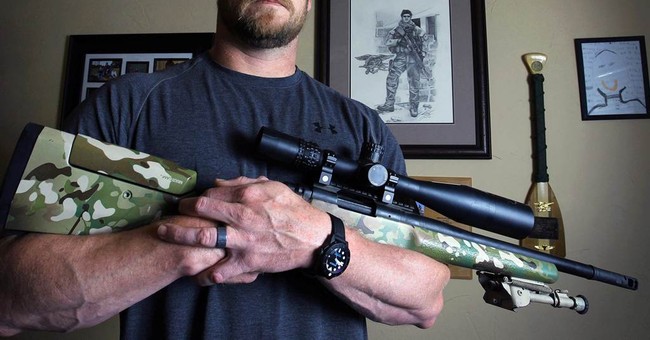 I am never offended when someone scoffs at a movie I love. In matters of opinion, we are all entitled to admire (or not) the films, TV shows, books and music that move us. There have been widely admired films that did very little for me, and others I loved that did not score with critics or at the box office.

I am blown away by the diligence and the artistry that have given us Richard Linklater’s “Boyhood,” the nearly three-hour rocky ride through a family’s life that took twelve years to shoot. Just the other day I ran across some folks who found it a crashing bore. I obviously disagree, but it matters not one bit. We like what we like.

“American Sniper” is a wholly different discussion, one that I can only now fully join. After hearing some glowing reviews and some that were more tepid, the testimony of waves of friends and acquaintances (and talk show callers) who loved it, and smatterings from the left heaping disdain, I finally saw it for myself on Wednesday afternoon.

I was profoundly moved at multiple levels. It is a fine work, from the directing of Clint Eastwood to the remarkable transformation of Bradley Cooper into Chris Kyle, a figure known well in my part of Texas. Sienna Miller is superb as Taya Kyle, showing us her anguish as her husband endures great danger across four tours of duty, wrestling with his inability to fully come home in between. “People are dying and I’m going to the mall,” he laments as the family that needs him pulls him from one side and the country that needs him pulls from the other.

It is the nurturing of a new passion, helping veterans disabled by issues from IEDs to PTSD, that grounds him in his home, calming his warrior soul— just in time to be shot by one vet he was trying to help on February 2, 2013.

A screenwriter dreaming up this level of gut-wrenching tragedy would probably be turned down. It’s just too over the top. A legendary war hero with struggles at home, quieting his demons by giving to his fellow soldiers, one of whom takes him out, leaving a wife, two small children and a nation of grieving admirers.

Who would believe that?

But it is all too real, and those realities spill out on the screen during “American Sniper,” which is a war movie, a love story and a classic American tragedy for the ages. I have never appreciated Eastwood more, and after “Silver Linings Playbook” and “American Hustle” the last two years (before we even get to his amazing stint as “The Elephant Man” on Broadway), Bradley Cooper is one of the most remarkable actors working today.

There is no doubt that I admire the filmcraft even more here because my heart is wrapped so tightly around the subject matter. Chris Kyle was a fellow Texan, a hero whose sacrifices protected my family. My wife and I attended his memorial service at Cowboys Stadium nine days after his death. We watched the signs and flags draped from every overpass the next day as his funeral procession rolled through the rain from Arlington to Midlothian to the Texas State Cemetery in Austin.

I loved that man. I love this movie.

If others do not, that is fine, as I mentioned at the top. Not everyone has to admire the film, or even its subject matter. You don’t have to hold “American Sniper” or its subject matter in the high regard that I do.

But the torrents of liberal revulsion the film has sparked have nothing to do with vigorous debate over a movie’s merits. The Hollywood haters of “American Sniper” are driven by hatred of Chris Kyle himself. And it is there we find a modern mental pathology that would keep a full ward of psychologists busy for a very long time.

But no degree in human personality traits is necessary to see what drives the monstrous reactions of the Michael Moores, Seth Rogens and Max Blumenthals who have gone beyond disregard for the movie to heap venom on its subject.

There is not a surprise to be found in Moore’s attack about the cowardice of snipers, Rogen’s snotty comparison of the film to Nazi propaganda, or even Blumenthal’s label of “mass murdering sniper,” in the mold John Lee Malvo.

This is a natural visceral reaction when the bigotries of the left are laid bare to the bright light of American virtue. The prospect of a selfless American hero willing to risk his life to fight the evils of global jihad offends leftism at every level. It speaks to a strong America, which they despise. It celebrates wartime sacrifice, which does not move them. And it highlights the evils of our Islamic enemies, which sends them over the cliff into an abyss of hostile loathing they cannot help but share.

The comments of the Kyle-haters were met with conservative pushback, much of it suggesting that Michael Moore in particular should shut up and thank God for the Chris Kyles who fight for his freedom to make whatever little films he pleases.

I differed. From the insults to Kyle to the labels of him as a murderer, to the derision of any film that would elevate him, I want to hear it all. I want every loathsome, odious rant from these people to be out there for all to hear. Let them be judged by those words. Let their vicious derangements go into a time capsule for the ages, to chronicle how such merchants of our pop culture reviled the people who fought for the liberties they take for granted.

No one is required to love “American Sniper.” No one is required to support the war. But if you are unmoved as the credits roll, there is something askew in your heart. A liberal friend told me Kyle’s compulsion to defend his nation and protect his SEAL brethren made him seem “like a psychopath.” I asked if he felt similarly about selfless devotion to civil rights in the era of Dr. King, or a life given over to the cause of marriage equality today. Doesn’t someone looking to prevent future 9/11’s deserve at least a tip of the hat?

What is missing in the cauldron of leftist aggressions is the inability to appreciate the sacrifices of participants in wars they disagree with. It led them to brand past generations of soldiers as baby-killers in Vietnam, and it leads them to insult the honor of those who volunteer today to protect our nation from Islamofascist monsters who would kill us where we stand.

If ambivalence to “American Sniper” is evidence of a missing cog in the heart, condemnation of it is evidence of a dark pool in the soul, a black hole of hatred that yields a wounded animal reaction when faced with the threat that Chris Kyle’s life story poses to their worldview.