Conservatives Must React to Obama Speech with Courage and Energy 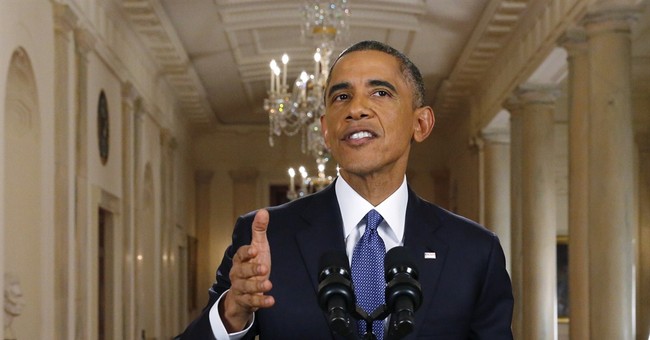 I trust we have established that the Reagan and Bush 41 immigration adjustments were vastly different than what President Obama has foisted upon us.

That said, Reagan and Bush should have run their immigration bill edits through Congress, too. If we’re going to stand on principle, let’s stand on principle. I know full well that throughout American history, executive orders have been used as nudges toward goals presidents could not win from Congress.

Tough. Congress makes laws, presidents enforce them. Let’s insist on that moving forward, through presidents we vote for and those we do not, on agendas we support and those we oppose.

Only that kind of consistency and clarity provide the proper ethical foundation for identifying the Obama speech as what it is: a callous, craven usurpation of power designed to satisfy his political base irrespective of the damage done to the nation and its founding concepts.

We have endured six years of Obama’s dalliances with the rule of law. But never before has he flouted the Constitution when sound bites abound of recent promises not to commit the exact offenses he is committing.

So now he wields the arrogance of an emperor, crafting immigration reform unilaterally, bypassing Congress. No one should be surprised, but this sets new records for cynical excess.

Also reaching for new lows are the supporters of soft immigration laws who have cobbled together a knee-slapper of a defense: A president, they say, has vast discretion over which laws he enforces and which he does not.

His oath of office says otherwise, with its references to “faithfully execute” his duties and “preserve, protect and defend” the law of the land.

Does anyone in executive enforcement power have some latitude in how to slice the attention pie? Of course. But this is not the local police chief saying child abduction will get more emphasis than bank robberies. This is the police chief saying there are crimes occurring in town that are to be willfully ignored, and in fact no longer characterized as crimes.

Setting up a whole new base camp on the mountain of lawlessness will draw proper revulsion from anyone caring about borders, the rule of law and the separation of powers. But the worst thing we can do is react clumsily.

The president invoked a government shutdown because that is exactly what he wants the GOP to propose. I’m surprised he didn’t add: “…and surely you don’t want to be drafting articles of impeachment.”

A strong argument can be made for just that, but it is not worth it when the stage is set for a far better use of the next two years— a conservative campaign of constructive ideas on everything from immigration to the economy to national security, creating a contrast that not only further suppresses Obama approval numbers, but also stigmatizes Hillary Clinton and any other Democrat stepping out next year with the same failed agenda that has burdened us since 2009.

I actually favor a type of under-reaction, a detached acknowledgment of the president’s ploy, coupled with a tone that suggests our intention to make it irrelevant.

Let him trample our founding documents. We will honor them with a bill that makes sense, and we will do it very early in 2015 so every GOP presidential candidate can run on it. Newly elected and incumbent Republicans should be working on it right now and straight through the holidays so that the first big story of the new year can be the best response conservatives can muster— not the doomed drama of impeachment or a flurry of well-intentioned but probably equally doomed lawsuits, but a positive agenda that will bring additional Americans on board for a Republican wave lasting the rest of the decade.

It can be phrased with a simplicity that will resonate with even the least-informed voter: Confirmable border security first, then a gradual non-amnesty path toward legal status for non-criminals with a willingness to assimilate.

This means English fluency in addition to fines and back taxes. How many local TV stories have we seen where reporters interview 30-year residents speaking through an interpreter?

No more. The path to legal status will be demanding, sifting out those with faint hearts or a penchant for crime. Those left contain a good number of people who will become proud and productive Americans.

Barack Obama will veto this, invoking as many heart-rending anecdotes as he can pack into his terse refusal. He will thus become The President of No, obstructing the first immigration reforms real majorities of Americans— and both houses of Congress— can embrace.

Conservatives, especially the near-dozen who may run for president, can then loudly embrace a solution that makes real progress while honoring the Constitution, the rule of law and our very sovereignty.

The president surely believes he has Republicans right where he wants them— poised to whip up a fire of litigation and bellicose posturing that will enable him to paint us with the slander that strong immigration laws are somehow bigotry.

If we play our cards right, we can make clear at every juncture that we are trying to make a better America, even for some of today’s illegals to eventually grow old in, if they follow the rules, learn our language, atone for their illegal entry and assimilate as past immigrant generations have.

The key for anyone seeking that goal is to walk through the necessary turnstile— one full year of a proven secure border that will at last give us some security that the tidal waves of illegal entry will finally stop.

The Obama speech was not a grand destination, or even a defining moment along the road to meaningful resolution of our immigration crisis. It was a roadblock that needs to be worked around so that we can craft legislation that people can actually support, and that a much better president can actually sign.