Marita Noon
|
Posted: Apr 05, 2016 11:11 AM
Share   Tweet
The opinions expressed by columnists are their own and do not necessarily represent the views of Townhall.com. 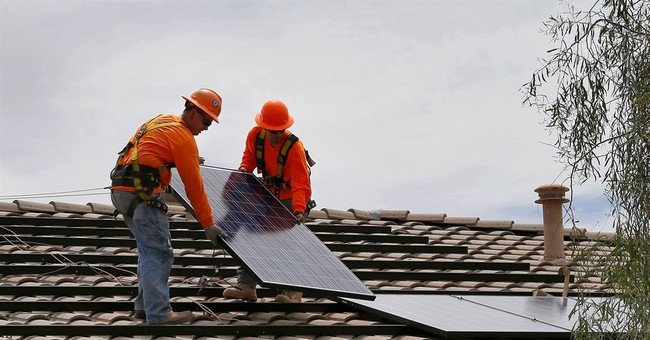 Worried about self-preservation, and acting in its own best interest—rather than that of consumers specifically, and America in general—solar industry groups have sprung up to defend the favored-status energy policies and attack anyone who disagrees with the incentive-payment business model. The most prominent is TASC—which was founded and funded by solar panel powerhouses SolarCity and SunRun with involvement from smaller solar companies (SolarCity recently parted ways with TASC).

The Alliance for Solar Choice (TASC) is run by the lead lobbyists for the two big companies—both have obvious Democrat Party connections: Bryan Miller and John Stanton.

A news report about the founding of TASC states: “First and foremost, the group will work to protect net-energy metering (NEM) rules in the 43 states that have them.”

On March 25, the Wall Street Journal reported: “two dozen states are weighing changes to their incentives for rooftop solar…incentive payments have been the backbone of home solar firms’ business model.” In the past several months, Nevada and Hawaii have ended their NEM programs. TASC has responded with lawsuits. In Hawaii, TASC’s case has already been dismissed with a report stating: the judge’s “ruling in favor of the Defendants has eviscerated TASC’s claims.” Last year, Louisiana capped its “among the most generous in the country” solar tax credit. Arizona Public Service was the trailblazer in modifying generous solar policies when, in 2013, the Arizona Corporation Commission approved a fixed charge for solar customers.

The reoccurring theme in the TASC campaign is to connect the word “kill” with “solar”—though the NEM modification efforts don’t intend to kill solar. Instead, they aim to adjust the “incentive payments” to make them more equitable. However, without the favors, as was seen in Nevada, rooftop solar isn’t economical on its own. Companies refuse to play when the game is not stacked in their favor.

TASC is just one of several ways the rooftop solar industry—also known as a “coalition of rent seekers and welfare queens,” as Louisiana’s largest conservative blog, The Hayride, called them in the midst of that state’s solar wars—is trying to protect its preferential policies. It has other tricks in its playbook.

In addition to the specific industry groups, third party organizations like the Energy and Policy Institute (EPI) are engaged to intimidate public officials and academics. EPI, run by Gabe Elsner, is considered a dark money group with no legal existence. It can be assumed to be an extension of what is known as the Checks & Balances Project (CB&P)—which was founded to investigate organizations and policymakers that do not support government programs and subsidies for renewable energy. Elsner joined CB&P in 2011—where he served as Director—and then, two years later, left to found EPI—which C&BP calls: “a pro-clean energy website.” EPI produces material to attack established energy interests and discredit anyone who doesn’t support rooftop solar subsidies.

Then there is the Solar Foundation—closely allied with the Solar Energy Industries Association and government solar advocacy programs—which publishes a yearly report on solar employment trends across the country. Solar employers self-report the jobs numbers via phone/email surveys and the numbers are, then, extrapolated to estimate industry jobs nationwide. Though the reports achieve questionable results, threats of job loss have proven to be an effective way to pressure state and federal lawmakers to continue the industry’s favorable policies—such as NEM.

Together, these groups have a coordinated campaign to produce public opinion polling that is used to convince politicians of NEM’s public support. They gather signatures from solar advocates and use them to influence legislators and commissioners. They engage in regulatory and rate proceedings—often creating mob-like support from tee-shirt-wearing, sign-waving advocates. They run ads calling attempts to modify solar’s generous NEM policies a “tax” on solar and, as previously mentioned, attack utilities for trying to “kill solar.” If this combined campaign isn’t fruitful, and NEM policies are changed, lawsuits, such as those in Hawaii and Nevada, are filed.

This policy protection process may seem no different from those engaged by any industry—as most have trade associations and advocacy groups that promote their cause. Few are truly independent and self-preservation is a natural instinct.

Yes, even the fossil fuel industry has, for example, the American Petroleum Institute, the Independent Petroleum Association of America, the National Mining Association, and the American Coalition for Clean Coal Electricity. And there are advocacy groups who support various limited-government, free-market positions, as Miller recently accused.

The difference is that fossil fuels provide, and has been providing, America with efficient, effective, and economical energy. Its abundance has lowered costs for consumers and increased America’s energy security. Advocates are not fighting for special favors that allow this natural resource to survive, but are rather attempting to push back on new rules and regulations aimed at driving it out of business.

By comparison, the solar advocacy efforts are, as acknowledged by TASC, to protect the politically correct policies—without which rooftop solar energy doesn’t make economic sense. Because rooftop solar power isn’t efficient or effective, its major selling point is supposed savings that are achieved for a few, while costing all tax- and rate-payers.

With the potential of a change in political winds—remember the solar supporters all seem to be left-leaning, big government believers who want higher energy prices—the campaign for America’s energy future is embedded in the presidential election.