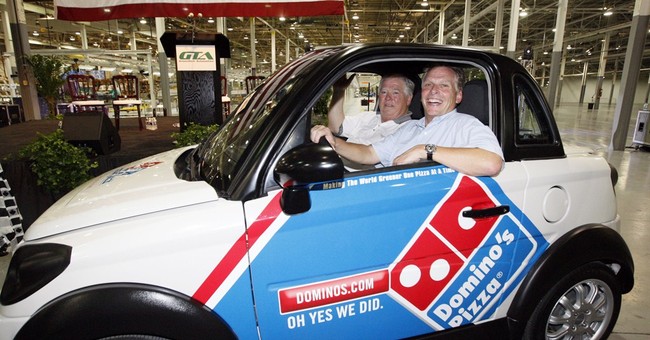 With the embarrassment the three “er”s—Switzer, Wiener, and Filner—have created for the Democratic Party, one would think they would want to steer clear of scandal-ridden candidates. But—no. Terry McAuliffe is, once again, hoping to become the governor of the Commonwealth of Virginia when voters go to the polls next month. Among his friends, McAuliffe is known as The Macker—which my sources tell me is a play on the Yiddish “Macher,” meaning: “Big shot. A man who is (or thinks he is) really important. Usually refers to someone who is showing off in some way.”

I don’t cover campaigns. I write on energy issues. So, other than the fact that, at their respective 2012 conventions, I met both the Republican candidate Attorney General Ken Cuccinelli—who I found to be totally solid, humble, and extremely good-looking, and Democratic candidate former Democratic National Committee Chairman Terry McAuliffe—who worked the room at the private party with back-slapping chumminess and a toothy smile, why am I writing about McAuliffe? Because, when we were introduced, my friend told him that I write on energy issues—specifically green-energy, crony-corruption.

McAuliffe, aka, the "Macker," moved in, posed for a picture with me, and told me that I’d like his new green car project because it was being fully funded through private money. I looked askance at him, and told him that if that was really true, I’d be interested in hearing about it. He assured me it was—and then, quickly slipped off to someone more receptive.

Apparently the “private money” was pure politicking. The Macker’s MyCar—a “neighborhood electric vehicle” with a 25-mile range and a top speed of 35 mph that Car and Driver reported: “isn’t a real car”—may have private funding that’s scandalously acquired, but it also depends on millions in government assistance, tax exceptions, and rebates. The Washington Post says McAuliffe’s GreenTech Automotive “fits into a pattern of investments in which McAuliffe has used government programs, political connections and access to wealthy investors of both parties in pursuit of big profits for himself.”

To build the MyCar, The Macker was able to get loans and land donations from the state of Mississippi—the poorest state in the US. Tunica County’s economic development foundation donated 100 acres at a cost of $1.8 million and, in 2011, the state gave a $3 million loan toward site preparation. Other reports count the “completely disbursed” loans at $5 to $8 million. Where did the “poorest state” find this kind of cash to build cars? While we don’t have records verifying the source, we do know that the Mississippi Development Authority’s Energy Division received approximately $40 million from the 2009 Stimulus Bill that was designated for “stimulating the creation or increased retention of jobs” and “reducing greenhouse gas (GHG) emissions.” GreenTech’s MyCar would fit the requirements.

You might be wondering, if McAuliffe is running for Governor in Virginia, why is he setting up his car manufacturing business in Mississippi? One answer is, the decision makers in the Virginia Economic Development Partnership (VEDP) saw through the scam and didn’t bid on the project. According to the Associated Press, Mike Lehmkuhler, Vice President For Business Attraction At VEDP, reported: “We still do not see a unique value proposition that explains how GreenTech will reach forecasted sales.” But, the real answer is found in Bloomberg News on October 7, 2010: “Besides Mississippi, McAuliffe is looking at sites in Tennessee and Virginia and says he will go to the state offering the best tax breaks and other benefits.” Now we know, Mississippi offered “the best.” With the support of then-Governor Barbour, GreenTech is in line to, or has already received, “public loans and grants that total more than $8 million, with millions more in tax exemptions and rebates.”

Perhaps when Terry told me his car was being built with all private money, he was just showing off. Must be the same for the jobs he said GreenTech would create—after all he is running for governor with this slogan: “McAuliffe for Governor: Putting Jobs First.” When McAuliffe announced his plans to run for Virginia governor in 2013, he stated in an email, “It is absolutely clear to me that Virginians want their next Governor to focus on job creation...” Too bad he hasn’t focused on job creation.

As Christine Lakatos, my partner in the Green-Energy, Crony-Corruption Scandal that we’ve been reporting on for nearly 16 months, and I have found, all of these stories have several things in common:

·Inflated expectations of jobs created that never materialize; and

Lakatos has a full report on McAuliffe and GreenTech available in her Green Corruption Files that covers far more than I have space to address. She summarizes: “He promised hope, hundreds of thousands of green cars and thousands of green jobs––all made in America.”

McAuliffe has quoted many impressive figures touting GreenTech’s job creation potential. On October 6, 2009, in the Memphis Business Journal, he promised 1500 jobs by 2011. Less than a year later, he announced his intent is to eventually create 4,500 new jobs for the electric auto-manufacturing firm. Memphis-based Action News 5 quoted GreenTech’s Vice President Marianne McInerney as saying they “would create 350 jobs by the end of 2014 and those are direct jobs.” The New York Times, on July 6, 2012, reported: “Mr. McAuliffe said the venture would employ 900 workers in Mississippi by the end of the year, as well as create many jobs indirectly.”

After a year-long investigation, Action News 5 found that cars were being built and “then deconstructed and rebuilt over and over again to appear as though they were working”—though GreenTech’s VP claims the exercise was for “training and quality control.”

How has McAuliffe managed to pull this off? No surprise, he has friends in high places—most notably the Clintons. Former President Bill Clinton appeared at a GreenTech launch party; McAuliffe was chairman of Hillary Clinton’s 2008 presidential run (reports claim that if you support Hillary, you’ll donate to McAuliffe); her brother, Anthony Rodham, is responsible for fundraising for GreenTech (a scandal unto itself that I’ve not touched—but Lakatos has); Levar Stone, former director of the Virginia Democratic Party, served as GreenTech’s director of public and government affairs; Senator Tim Kaine (D-VA) has been pushing GreenTech’s interests; and Rick C. Wade, who has served in the Obama White House, joined GreenTech in 2011.

You’d think with all the connections, The Macker could at least produce the MyCar. But, as Action News 5 found: “Investigators have uncovered no evidence of any major car production.”

What does McAuliffe do well? He’s a deal maker—not a car maker. He’s a big shot. He’s been showing off in his election bid—claiming to be a job creator when he’s really been selling green cards (the scandalous funding), not green cars. While he’s claiming to be producing small eco-cars, what we have is a big green scam.