Bernie Sanders Taunts Us With New Threats of Economic Slavery

Marina Medvin
|
Posted: Apr 25, 2018 11:40 AM
Share   Tweet
The opinions expressed by columnists are their own and do not necessarily represent the views of Townhall.com. 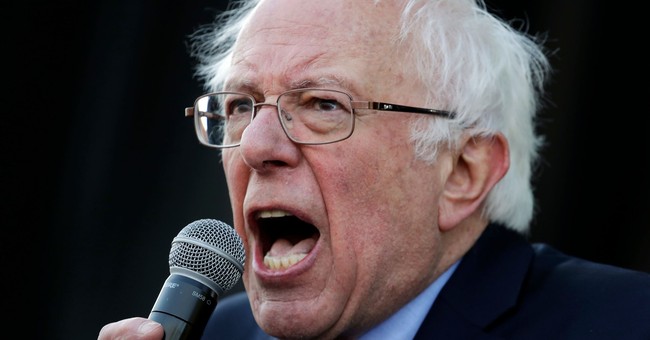 Taxation is theft. Socialism is slavery. There are no ifs, ands, or buts about it.

Bernie Sanders has spent his career publicly announcing and executing plans to steal large portions of cash from hardworking Americans in order to redistribute their money at his will to whomever he deems worthy of his sympathies. He calls this theft "high taxes."

Even more infuriatingly for me personally, he has paraded in front of the media endorsing the Communism / socialism that enslaved me and my family. He has made light of a most unethical, inhumane and enslaving government.

I was born in the USSR. Since demonic leaders like Sanders glorify the slavery that is socialism, let me refresh your information about the USSR through first-hand experience.

Sanders praised all of this. To him, socialism was great. So great, that he wants to bring it to America.

Bernie’s campaign slogan should be, “why should some be rich, when we can all be poor?” That was the USSR. That is what Sanders wants to curse upon the USA. And there are those who support him, tucking all of this away under the mis-termed label of “liberal.” Trust me, nothing about socialism is liberating.

Capitalism is liberating. Capitalism makes American great. Capitalism is what keeps people free and productive and innovative. It is the direct ideological opposite of socialism, which is a system of slavery, poverty and unproductiveness. That is why I love America and American capitalism - it liberated me and my family, who were held captive by the chains of socialism. Never again.

Sanders has been bringing socialism to America incrementally. Vermont senator race, various bills and proposals of working-class enslavement, socialized healthcare, the presidential race, and now public works. He wants these ideas to be mainstream.

Supply and demand? Pish-posh! That’s for the working class. Supply and supply, now that’s Bernienomics! But such a system is unprofitable, and where does the government get the money for such social works projects? Well … you. Those who work in the supply and demand world will be the ones who pay for Bernie’s utopian workforce. But is it your responsibility as an American worker to support your family, and also every family that the government decides you should support? No, that’s socialism.

Everything we get, outside of the free gifts of nature, must in some way be paid for. Every dollar that Bernie wants to give away comes from someone else - from a hardworking American. To create an unnecessary government work project means to take money away from someone who earned it. Henry Hazlitt has long ago explained the socialist evils of public works. Maybe it’s time to refresh our recollection of economics.

Look, socialism is despicable. Those who support publicly mandated theft, forced redistributions, and government enslavement of human beings are my ideological enemies. They are enemies of human rights. But their existence is important in differentiating values. Having people like Sanders supporting these unethical systems allow us to be more protective and more appreciative of the freedoms that we have. Every time his name is in the news, we should be motivated to fight against his ideologies and in favor of American capitalism.

America is supposed to be the enemy of socialism, not its ally.

Don’t let Sanders threaten your salary with more larcenous takings. Vote for people who believe that taxation is theft. Stand in the way of Sanders and other socialist goons. Protect the economic freedoms that make America great. Protect your hard-earned money from theft.