Majid Rafizadeh
|
Posted: Jan 16, 2022 12:01 AM
Share   Tweet
The opinions expressed by columnists are their own and do not necessarily represent the views of Townhall.com. 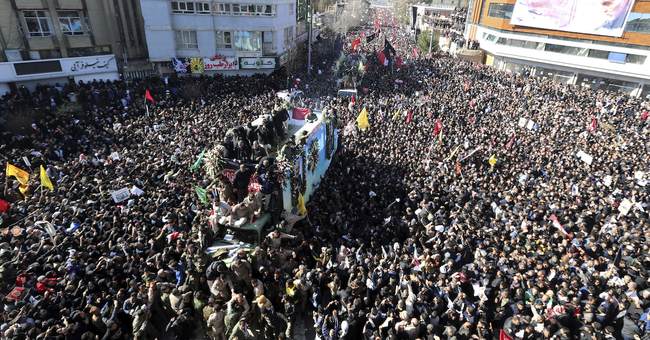 On January 5, a giant statue of Qassem Soleimani, the Iranian regime's dead terrorist mastermind, was displayed in the city of Shahr-e Kord. The regime unveiled the statue with much noise and fanfare just ahead of the second anniversary of Soleimani's elimination in a US drone strike in 2020.

Mere hours later, the statue was engulfed in flames by dissidents, dealing a major blow against state propaganda to bill the former commander of the terrorist Qods Force as a "hero."

Just a couple of days prior, the regime’s President Ebrahim Raisi delivered a televised speech in which he promised revenge for Soleimani’s death.

But the daring burning of Soleimani’s statue served as yet another reminder that the Iranian people despise the regime and its officials.

It also was an indicator of the opposition's courage, rapid rise and increasing organizational prowess. As the footage of the daring act exploded on social media and satellite TV channels, the regime was stunned.

The supreme leader’s representative to the province where the statue was erected, issued a fiery statement urging participation of regime adherents at a "memorial" to express "hatred and disgust" for those who committed the act.

The ensuing procession was carefully stage-managed by regime authorities. During previous regime rallies, the “Resistance Units” affiliated with the leading opposition Mujahedin-e Khalq counteracted the regime’s propaganda by organizing popular protests that featured chants against Soleimani while bringing down the posters of Tehran’s terrorist operative.Even some state media outlets acknowledged the people celebrated Soleimani's elimination.

At the height of the recent bout of uprisings, Supreme Leader Ali Khamenei said in a speech that the MEK had “planned for months” to popularize anti-regime slogans such as “death to the dictator” and to facilitate simultaneous protests in more than 200 cities and towns in all 31 provinces. Khamenei's admission stood in stark contrast to the regime’s decades-long propaganda that the oppositional group was a "marginal" movement, lacking a popular base and incapable of mounting a genuine challenge to the mullahs’ hold on power. At the same time, anyone suspected of even mildly sympathizing with the opposition risks arrest, torture and even execution.

Over the years, numerous activists have been sentenced to lengthy prison terms or executed for distributing the oppositional group’s literature or offering financial contributions to the organization. In November, while speaking in his own defense at his trial in Sweden for war crimes and mass murder, a former Iranian prison official acknowledged that anyone who so much as mentions the MEK by name faces swift arrest and prosecution by the fundamentalist mullahs.

Officials are consistently sounding the alarm regarding the oppositional group's growth and increasing popularity. As social unrest deepens, those concerns have been amplified. Over the past four years alone, Iran has witnessed eight nationwide uprisings and thousands of smaller local protests. Regime authorities have expressed astonishment about the rapid spread, politicization, and organization of these protests, blaming the MEK as the most organized and powerful opposition movement which has sought democratic change in Iran for the past four decades.

During the nationwide November 2019 uprising, the regime brutally gunned down approximately 1,500 peaceful protesters in a matter of a few days. Thereafter, the judiciary, then led by Ebrahim Raisi, undertook a months-long campaign of further arrests and systematic torture of thousands of detainees.

The crackdown did not stop tens of thousands of Iranian citizens from taking to the streets in January 2020 after the Islamic Revolutionary Guard Corps (IRGC) shot down a commercial airliner in the skies of Tehran, killing all 176 passengers.

During those protests, social media exploded with countless videos of protesters chanting against the IRGC and burning a number of billboards featuring Soleimani’s image.

The regime scrambled to reclaim control over Soleimani's legacy by staging the first of their stage-managed rallies. But so far, the propaganda campaign has failed miserably especially because the people of Iran recognize Soleimani as the murderer of many unarmed MEK members in Iraq, where they previously resided, and the brutal murderer of tens of thousands of people in Syria, Yemen, and Iraq.

In February 2020 and June 2021, the Iranian people overwhelmingly boycotted the regime's parliamentary and presidential elections in support of a nationwide call organized by the opposition. Over the following two years, the scope of anti-regime activities has increased thanks to the Resistance Units, with notable upsurges around the time of Raisi’s inauguration and the anniversary of Soleimani’s elimination. The burning of his statue comes in the wake of several weeks during which other images of the terrorist commander were also burned or brought down by activists. These acts have been hugely popular in Iran and on social media.

The facts on the ground in Iran signal that the winds of change are blowing hard against the ruling regime. This bears an important conclusion for the international community for 2022: The clock is ticking fast against the ruling theocracy and the ayatollahs are facing a growing challenge at home. The opposition's rapid rise promises a bright future for a secular, democratic and non-nuclear Iran.