The Right to Adultery? 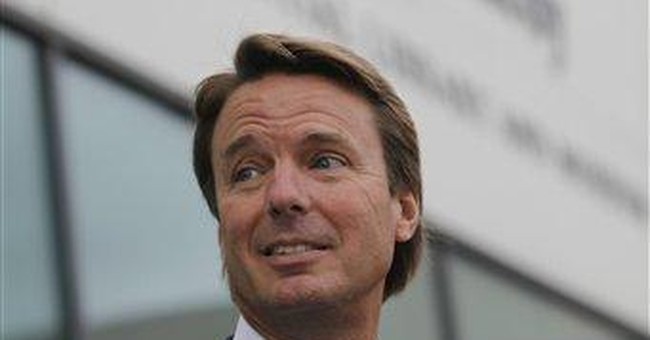 Seeing Rielle Hunter sprawled like an aging model on the pages of GQ raises once again the question: Should there be a legal right to commit adultery?

The ACLU says yes, and so does much of the family law bar that seeks to strip the law of all vestiges of "judgmentalism" (at least when it comes to sex). But what do the rest of us think?

Here's what I think: There's something wrong with a society that permits adultery to become a pathway to commercial success.

Adultery involves twin offenses: (1) the violation by a married person of his or her vows; and (2) a third party's decision to invade another person's marriage, to seek their own personal satisfaction at the expense of the unknowing and unconsenting spouse.

"You can't legislate morality," we are always told. Maybe not, but perhaps we could come up with a way to encourage a little common decency. On behalf of the injured wives, is there really nothing we can do to throw a little sand on the wheels of their marketing machines?

Item: I'm driving in my car, listening on Sirius/XM radio to the Fox News Channel. In between Glenn Beck and Bill O'Reilly, I hear an ad for a Web site whose commercial niche is helping arrange adulterous liaisons for married men. (I refuse to help their marketing by repeating the business's name.)

Item: I open up my favorite newspaper, the New York Post. Ashley Dupre, the prostitute who serviced Eliot Spitzer (meaning she committed both prostitution and adultery), is now a sex columnist dispensing relationship advice to young people.

Item: There's Rielle Hunter on the pages of a national magazine, pontificating about her compassion for John Edwards' wife, Elizabeth, in this particularly unattractive way:

"Infidelity doesn't happen in healthy marriages. ... So the home was wrecked already. I was not the Home Wrecker. ... It's also really sad to me, her unwillingness to take responsibility for her part in the marriage."

I have never seen a more aggressive display of narcissism: blaming the wife for failing to take responsibility for Hunter's acts of adultery -- acts that destroyed three children's home and put a fourth child -- her own -- in a fatherless home as well.

Currently we offer the person most injured by adultery -- the innocent spouse -- only one legal option for redress: the nuclear option of exploding her own family through divorce. I understand why women might choose that option, but not why we are so unwilling to give them any other option.

I do not want to pin a scarlet "A" on the breast of every man or woman who has sinned. I want something much more modest. I want people who commit this moral trespass to have the decency not to attempt to profit from it in the national media.

Here's what I'm guessing: We have some of the tools right now to stop it, if we wanted to use them. Some of the men hooking up through Web sites that advertise adultery probably live in states where adultery is still technically against the law, or where torts of criminal conversation or alienation of affection exist. An injured spouse or an aggressive state attorney general could make a case out of this.

But we could also update these older torts of adultery with new language that makes explicit that commercial enterprises that intentionally and explicitly attempt to profit from acts of adultery expose themselves to lawsuits by the injured wife and children. For that matter, why isn't commercially soliciting for adultery as much of a crime as soliciting for prostitution?

People do bad things. We can't always stop them. But we could prevent them from turning adultery into a business model.