Loyd Pettegrew
|
Posted: Mar 03, 2021 12:01 AM
Share   Tweet
The opinions expressed by columnists are their own and do not necessarily represent the views of Townhall.com. 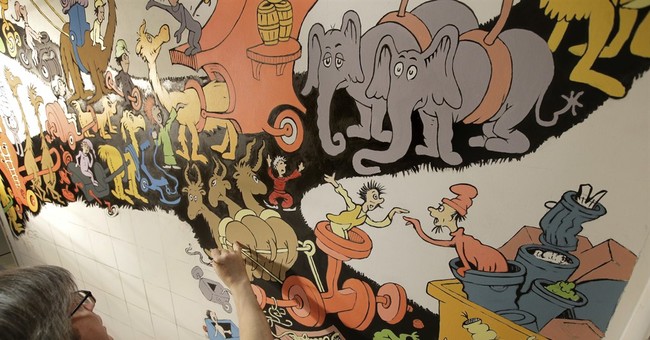 Today is a day that will live in infamy. On March 2, 2021 we learned that the some of the works of Dr. Seuss have been banned by President Joe Biden for our National Read Across America Day. Dr. Seuss, the nom de plume of Theodor Seuss Geisel, was a cherished American children's author, political cartoonist, illustrator, poet, animator, and filmmaker. Like McGuffy’s Reader, Dr. Seuss’ work served as a compelling introduction for young children to books and reading. That was, in fact, the reason for National Read Across America Day. Too many young people aren’t introduced to the importance and fun of reading books, and stare blindly at their phones instead.

Count The Washington Post in for its sterling journalistic standards with an article by Phillip Bump that argues about Seuss’ book, If I Ran the Zoo, “In Seuss’s drawing, the bird-thing is perched on a pole being held by two caricatures of African men that are so obviously and immediately racist that it was almost breathtaking. It would be like watching an interview with Tom Hanks in which he suddenly started casually dropping racial slurs, a grotesque act accentuated by astonishment at the source. This was Dr. Seuss, the benchmark for authors of children’s books!”

Mr. Bump’s pretzel logic is even quirkier than Dr. Seuss’ characters. Especially when it was revealed that for a National Read Across America Day during the Obama years, First Lady Michelle read to a group of children from Dr. Seuss with people dressed in Seuss characters in attendance. The First Lady, and heartthrob of the Left, seemed oblivious to Dr. Seuss’ patently racist illustrations and latent messages!

This is the essence of our current cancel culture’s standard, or lack thereof--Judging people from a bygone era by some people’s own contemporary leftist standards. As in sync with cancel culture, Amazon.com, the leftist’s netherworld, immediately cancelled the sale of six of the Dr. Seuss books its tech wizards found to be either racist or insensitive. I guess they didn’t check with former First Lady Michelle.

As a tribute to Dr. Seuss and repudiation of the cancel culture clucks, I offer a series of Dr. Seuss sayings collected by Amy Finn and then amended slightly for the present day “off with your head” cancel culture we live in.

Seuss--“Today I shall behave, as if this is the day I will be remembered.”

CC--“Today I shall behave, as if this is the day I will be remembered...unless I cross the line and cancel culture gets me first.”

CC--“Person, you’ll move mountains...as long at they comply with our view of mountains.”

Seuss--“Unless someone like you cares a whole awful lot. Nothing is going to get better. It’s not.”

CC--“Unless someone like you cares a whole awful lot about leftist ideals, everything is going to get worse. It is!”

Seuss—"Why fit in when you were born to stand out?”

CC-“Why stand out when you you’re required to fit in?”

CC--“Think and complain about ideas you don’t agree with. Complain and cause a stink.”

Seuss—" From there to here, from here to there, funny things are everywhere!”

“From there to here, from here to there, horrible things are everywhere!”

Suess-- “It is better to know how to learn than to know.”

CC--“It is better to know how to uncover bad things than to know what they really are.”

Seuss—" Be sure when you step, step with care and great tact. And remember that life’s a great balancing act.”

CC--“Be sure when you step, tromp on everything without tact. And remember that life’s a woke attack.”

Seuss-- “Everything stinks until it’s finished.”

Seuss—Only you can control your future.”

CC--“Only the Democrat Party can control your future.”

Seuss-- “You’ll miss the best things if you keep your eyes shut.”

CC--“You’ll miss the best things if you keep your eyes on conservative stuff.”

Seuss-- “Be grateful you’re not in the forest in France where the average young person just hasn’t a chance to escape from the perilous pants eating plants but your pants are safe, you’re a fortunate guy you ought to be shouting how lucky am I”

CC--“Be grateful you’re not in the forest in New Yawk, where the average young person just hasn’t a chance to escape from the perilous red state-eating plants, but your are safe, you’re a fortunate gender neutral person, you ought to be shouting how woke am I.”

Seuss-- “Today you are you, that is truer than true. There is no one alive that is youer than you.”

CC--“Today you are you, that is truer than true. There is no one alive that is woker than you.”

Dr. Seuss, where are you when we need you. RIP.