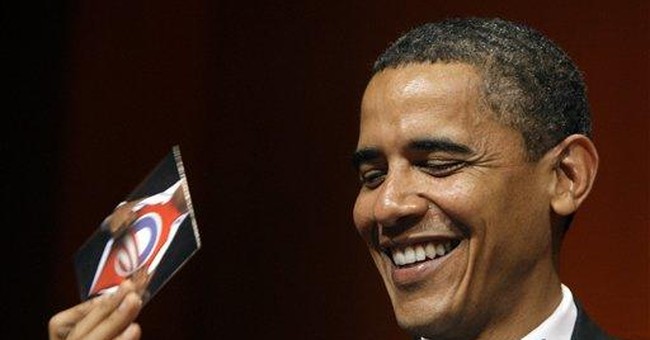 President Obama has spent much of the past six months talking about all the things he inherited from George Bush. Unfortunately there are a lot of things he did not inherit from Bush, among them how to be the leader of the free world. The uprising in Iran has revealed Obama’s lack of leadership, but even worse, an apparent weakness when it comes to speaking up for freedom for everyone in the world.

Obama’s stated willingness to sit down and negotiate with Iranian madman Mahmoud Ahmadinejad without preconditions was a source of concern for many Americans during the election, but “hope’n change” was evidently more important to the majority of voters . Not surprisingly we now have a president who stayed silent on the protests in Iran for days, then issued only a tepid statement, followed by several similar comments.

Those on the left, and some on the right, have praised President Obama’s approach. George Will said, “The president is being roundly criticized for insufficient rhetorical support for what's going on over there. It seems to me foolish criticism. The people on the streets know full well what the American attitude toward that regime is, and they don't need that reinforced.”

I don’t know that the people on the streets do “know full well what the American attitude toward that regime is.” They know what it was. (Does “axis of evil” ring a bell?) But maybe they also know how strongly President Obama has denounced his predecessor’s approach to foreign policy and his world view in general. Add to that Obama’s recent response to the protests and there are probably a lot of people around the world who don’t “know full well” what the American attitude now is.

President Bush spoke forcefully, and often, about freedom and liberty and democracy. The often tongue-tied public speaker Bush was most eloquent and at ease when talking about those principles. His desire to see freedom and democracy spread throughout the world is deeply heartfelt and that was evident in his speeches.

Ken Wheaton wrote about Obama’s response on his blog, “We don’t have to bomb Iran. We don’t have to be bellicose. A statement of support from the United States would show that our government actually cares about the PEOPLE of Iran. God knows that Americans of all stripes–via Twitter and other media–are making that clear…As someone said yesterday, “He’s trying to vote ‘present,’ but he can’t.” He’s the president now, not a junior senator from Illinois. He should act like it.”

When Barack Obama ran for president, many said they supported him because they wanted the rest of the world to like America again. Being liked is nice, but every true leader knows it is far from the most important thing when it comes to leading.

To some extent President Obama has relinquished our country’s role as leader of the free world. He is reacting rather than leading. It is not necessary, nor would it be wise, for Obama to make the United States the issue. But what he could do is use some of his famous speechifying to really inspire and encourage those seeking freedom. There are people literally giving their lives in the streets in the pursuit of freedom and the supposed leader of the free world has been largely silent.

President Obama’s wait and see and try to say as little as possible approach on Iran stands in stark contrast to that of President George W. Bush. I wish Obama had inherited George Bush’s passion and commitment to those pursuing liberty and democracy around the world.

The following is from Bush’s 2006 State of the Union speech:

“Every step toward freedom in the world makes our country safer, and so we will act boldly in freedom's cause. Far from being a hopeless dream, the advance of freedom is the great story of our time…”

“At the start of 2006, more than half the people of our world live in democratic nations. And we do not forget the other half -- in places like Syria and Burma, Zimbabwe, North Korea and Iran -- because the demands of justice and the peace of this world require their freedom as well. No one can deny the success of freedom, but some men rage and fight against it…”

“Democracies in the Middle East will not look like our own, because they will reflect the traditions of their own citizens. Yet liberty is the future of every nation in the Middle East, because liberty is the right and hope of all humanity. The same is true of Iran, a nation now held hostage by a small clerical elite that is isolating and repressing its people. The regime in that country sponsors terrorists in the Palestinian territories and in Lebanon, and that must come to an end. The Iranian government is defying the world with its nuclear ambitions, and the nations of the world must not permit the Iranian regime to gain nuclear weapons.”

“America will continue to rally the world to confront these threats. And, tonight, let me speak directly to the citizens of Iran: America respects you and we respect your country. We respect your right to choose your own future and win your own freedom. And our nation hopes one day to be the closest of friends with a free and democratic Iran.”

That’s what it sounds like when the leader of the free world speaks.