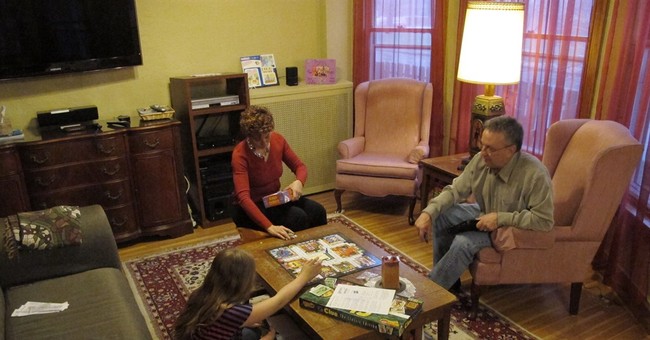 Nearly every TV commercial seems to show the husband or father as bumbling, emasculated basement-dwellers. One commercial that sticks in my mind is a laundry detergent commercial that shows a husband and wife folding their triplets’ clothes. The husband says, “You’re cuter than clean clothes.” The wife responds, “Thanks, honey. You suck at folding.”

So much for positive reinforcement.

It’s a common theme in commercials and sitcoms that men just can’t do anything right. In her new book, “Men On Strike: Why Men Are Boycotting Marriage, Fatherhood, and the American Dream – and Why It Matters,” Dr. Helen Smith tackles how men got to the point of not even trying.

Popular wisdom keeps telling us that men are stuck in an adolescent stage of non-committal relationships, video games and beer pong. However, Smith notes that men are putting off marriage and fatherhood as a rational, not immature, choice. She writes, “The discrepancy between the life of the freer, single man and the life of the less respected, less free life of the married man is at the heart of why so many men have gone on strike. This discrepancy between the perks of single life and the punishment of married life for men has become wider in modern times given the unequal legal terms, cultural empowerment for married women –but not men – and the lack of reproductive rights that men face in comparison to their female counterparts.”

Smith, a forensic psychologist, has been writing about the culture wars for many years. In addition to her popular blog at PJMedia, she has written for the Los Angeles Times, Christian Science Monitor, and The Cleveland Plain Dealer. She also hosts a podcast with her husband, Glenn Reynolds, also known as Instapundit (he affectionately calls her the “InstaWife).

Smith’s “Men on Strike” is an interesting read on the current state of the so-called gender wars. As a single woman, here’s hoping either societal trends change or there are a few “scabs” out there willing to pick up the slack for the women who still appreciate them.

I would repeal the "Violence Against Women Act" because it is unfair to men. There are many male victims of violence who have no lobby. Why is one sex more important than the other?

It would be my third grade teacher, Ms. Cormandy. When another student made fun of me in class, she told me that she liked me just the way I was and that stuck with me to this day and made me feel that someone was on my side when I was young. That meant a lot and helped me to help kids in my work as a psychologist later in life.

There are many jobs I would do (and have done) for no pay. However, I guess it would have to be to get paid to be a professional nap taker.

4. What hidden talent would be your best way into getting into the Guinness Book of World Records?

I can roll my tongue--does that count?

I have a bunch of them! I love the Kardashians, “Big Bang Theory,” “The Middle” and “Rules of Engagement.”

A Magic Eight Ball for my sixth birthday! It was so exciting to ask any question my heart desired and have it answered immediately.

Probably when I gave my husband a knife recently with his name on it from some souvenir shop in Gatlinburg, TN. I spent years trying to find him the perfect gifts for anniversaries, birthdays etc. but that simple gift was the one that got his attention.

My father, who had a PhD in mathematics, told me never to get a PhD. I didn’t listen to him and went through years of school that, frankly, was long and tedious. At my graduation, however, I heard a loud cheer when I walked across the stage. It was my dad who was so excited that I finally got my degree that he stood up and yelled for joy, probably because I would finally quit complaining to him about how long it was taking.

I would like to see a panel of commentators from PJTV such as Bill Whittle, Andrew Klavan, Michael Walsh, Alfonzo Rachel, or my husband, Glenn Reynolds.

These are a few books that I have read recently, but love to re-read from time to time:

“The Myth of Male Power” by Warren Farrell.

“Enjoy the Decline” by Aaron Clarey

“Media and Male Identity: The Making and Remaking of Men” by Jim Macnamara.

The 2012 election count was a mistake and Romney is our new president.

I was a libertarian since I was in grade school arguing with another girl about why mandatory education was a threat to individual freedom. There was no moment that I decided to enter the political arena. I was just always fascinated by human behavior from a young age and politics is all about human behavior. I read books such as Eric Fromm's “Escape from Freedom” when I was younger as I was always curious as to why people were so afraid to think for themselves. I find the current state of politics in the US to be heading in a scary direction--one where individual freedom and autonomy are at risk. All of us who value freedom should be involved in politics in whatever way we can.