Does Trump Really Want to Be President?

Linda Chavez
|
Posted: Jun 10, 2016 12:01 AM
Share   Tweet
The opinions expressed by columnists are their own and do not necessarily represent the views of Townhall.com. 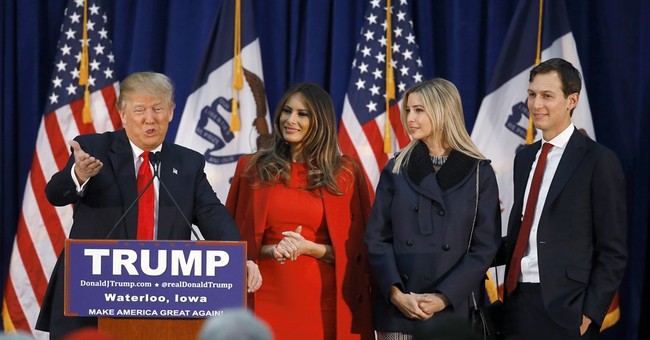 Trending
Does Donald Trump want to be president? It's a serious question. Yes, he wants to win more votes than anyone else. He wants the biggest bully pulpit available -- one aptly named, in his case. He wants power over others' lives. He wants to give orders and command troops. But does he want to govern? And does he have any idea what that even means? The evidence suggests he doesn't.

Over the past two weeks, Trump has behaved like a man on a mission to derail his own nomination. He has said so many offensive things over the course of his campaign it's numbing. But Trump crossed the Rubicon when he invoked ethnicity as a disqualification for a federal judge trying a case in which he and his now defunct Trump University are defendants.

"He's a Mexican. We're building a wall between here and Mexico," Trump railed to CNN's Jake Tapper in reference to American-born U.S. District Judge Gonzalo Curiel. Trump didn't just say it once; he repeated it several times during the interview. Nor was the Tapper interview the first time Trump raised the judge's ethnicity as a disqualification. Trump has made the same point repeatedly at campaign rallies, going back to February, when he referred to Curiel as "Spanish."

Pushed by the Republican Party's leadership, the campaign issued a statement on the controversy earlier this week, which blamed everyone but Trump for "misconstruing" his statements. How exactly does one misconstrue "He's a Mexican (and) we're building a wall between here and Mexico"? As House Speaker Paul Ryan said, it's "the textbook definition of a racist comment." Unfortunately, it wasn't enough to get Ryan to retract his endorsement.

But give it time; Trump still has five weeks before he actually becomes the nominee. What could he do between now and then? Lots.

After months of promising to self-fund his campaign, Trump has now admitted he doesn't intend to do so. He met with top GOP fundraisers this week, but he's downplayed what it will take to run a viable campaign, which suggests he knows he can't possibly raise the money he needs. This has to strike fear in the hearts of those who want to maintain control of the House and Senate, including Ryan and Senate Majority Leader Mitch McConnell, who would lose their jobs if control were to revert to the Democrats.

Trump won't put his business interests on hold while he runs for president. The Trump University lawsuit is a case in point, but not the only one. Later this month, Trump will leave the U.S. to go to Scotland and Ireland -- not to burnish his micro-thin foreign policy credentials but to visit his golf courses. When exactly does he intend to give up running his businesses? Running for president is a full-time job, but Trump certainly doesn't show any sign of putting in long days and nights hitting the briefing books, attending county fairs and reaching out to people beyond his base. He manages to sleep in Trump Tower most nights, finding traditional campaigning incompatible with his creature comforts.

He has no adequate campaign staff or get-out-the-vote operation in place. He hired lobbyist and GOP veteran Paul Manafort, but he seems to have put Manafort on ice. When someone in the campaign had the good sense to send out a memo to tell Trump surrogates to avoid questions on the Trump U suit, The Donald got on the phone to call whoever wrote the memo an idiot and then instructed the surrogates to triple down on the insults directed at Curiel.

Trump's biggest danger is his own mouth. He's managed to insult women, blacks, Hispanics, Muslims and the disabled, along with anyone and everyone he sees as not a fan. That points to his greatest vulnerability: his thin skin. It doesn't take much to get him to say something offensive. He's attacked the chairwoman of the Republican Governors Association, the speaker of the House, every one of his primary opponents (some, but not all, of whom have groveled at his feet nonetheless) and most of the U.S.' allies, along with the usual targets of Republican ire, the media.

Ryan, McConnell and Republicans like them are holding their breath. But Trump may well be goading them into denying him the nomination for a job he never really wanted in the first place. From Trump's point of view, he might be better off being able to claim the system was rigged against him than he would be having to face a humiliating defeat. Worse yet, he may be imagining what life might actually be like if he ended up having to do the job of president of the United States.