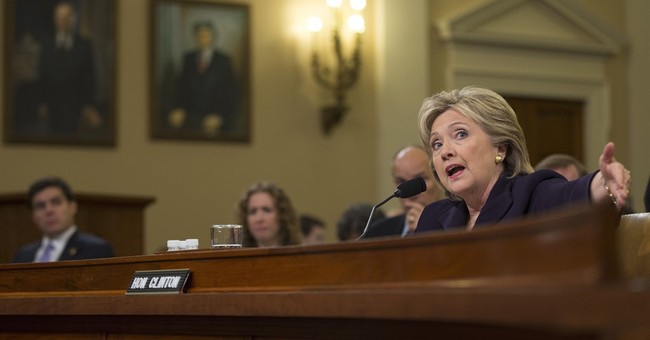 Hillary Clinton's performance before a House hearing on Benghazi, Libya, this week proved once again why the former secretary of state will be a formidable candidate for president. Under hours of intense grilling from Republican members of the House Benghazi Committee, Clinton managed to remain calm, professional and responsive. She never lost her cool. She didn't raise her voice. She refrained from eye rolling, kept condescending looks to a bare minimum and generally comported herself well.

It was a far cry from her appearance before the Senate Foreign Relations Committee in 2013, when she first addressed concerns about her response to the terrorist attacks that resulted in the deaths of four Americans in Benghazi, including U.S. Ambassador to Libya Christopher Stevens. In that hearing, Clinton famously brushed off notions that the administration had misrepresented the attack on the U.S. Consulate. "Was it because of a protest, or was it because of guys out for a walk one night who decided they'd go kill some Americans? What difference, at this point, does it make?" she angrily responded when challenged by Sen. Ron Johnson, R-Wis.

The Hillary Clinton of 2013 was not the woman who testified before Chairman Trey Gowdy's Benghazi committee Thursday. Even her physical appearance had changed. In 2013, Clinton wore thick glasses, her long hair hanging limply around her face, which looked sallow against a dark green suit. She spoke quickly and with an edge in her voice. The Washington Post actually counted the words per minute in both appearances, finding that Clinton's speech had slowed to 110 words per minute this week from her previous 150 words per minute in the earlier hearing.

This time around, Clinton looked rested and attractive. And yes, it matters what she looked like, not because she's a woman but because a candidate's appearance is the first thing people respond to. She needed not only to sound good before the committee but also to look good. Maybe physical appearance shouldn't matter, but it does.

In fact, the superficial aspects of the hearing probably did most to help Clinton and hurt the Republicans. I know it's difficult for political junkies and conservative activists to remember, but the public doesn't follow issues -- especially foreign policy -- very closely. Most Americans won't have listened to the hearings. They will have heard a few sound bites, looked at a few minutes of video and formed an opinion.

For many, if not most, conservatives, the Benghazi attacks represent everything that is wrong with the Obama foreign policy. The administration's intervention in Libya led to a vacuum of power that gave terrorists a more secure foothold in the region. When security deteriorated, the administration didn't do enough to protect American lives, and then it misrepresented the facts surrounding the death of Stevens and three others. Worst of all, politics seemed to drive the administration's actions -- and Clinton was, at best, complicit in the administration's failures.

But Republicans didn't do a good job of presenting that narrative. Instead, they got down into the weeds, wasting precious time focusing on Clinton's email with her confidant and sometime aide Sidney Blumenthal. Only Washington insiders could believe that Americans are concerned about some guy they never heard of and whether he had Clinton's personal email and ear. Blumenthal is a loathsome character, a gossip and a political hanger-on. But who cares? Certainly not the American people.

At the end of the marathon session, Hillary Clinton emerged not only unscathed but in better shape than when she went into the hearing. Clinton haters will claim the hearing showed a manipulative woman whose ambition always trumps honesty. Her supporters will see the day as a steppingstone on her way to the White House, allowing her to neuter congressional Republicans before she faces the Republican presidential nominee. But unfortunately for the GOP, those Americans who haven't made up their minds about Clinton may well think her performance showed grace under fire. It's those undecided voters the GOP needed to impress -- and Thursday's hearing did exactly the opposite.