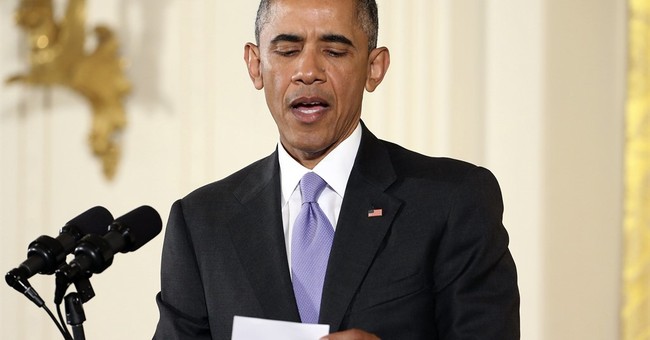 The president has said that the United States will be safer because of the nuclear deal his administration and five other nations fashioned with Iran. "Without a deal, we risk even more war in the Middle East," he said in an hour-long press conference on Wednesday. It was an unfortunate historical reminder, one the president would rather we all ignore.

In 1938, British Prime Minister Neville Chamberlain signed a four-party pact with Adolf Hitler allowing Nazi Germany to seize a portion of Czechoslovakia. Chamberlain returned from the Munich Conference, claiming "peace with honor. I believe it is peace for our time." But his Conservative Party rival Winston Churchill's words turned out to be more prophetic: "You were given the choice between war and dishonor. You chose dishonor, and you will have war." In less than a year, the Nazis invaded Poland, and the British declared war on Germany.

It is too soon to know exactly how events will unfold in the Middle East, but certain things are clear. There will be more nuclear weapons in the region because of this deal, not fewer. It isn't a matter of whether there will be war -- there are already several wars ongoing in the region, wars in which Iran participates directly or through its proxies. The Iranian Revolutionary Guard's Quds Force is already on the ground in Iraq, our erstwhile ally in the fight against ISIS but, in the long run, a great threat to our interests. Iran is supporting the Assad regime in Syria and the rebels in Yemen and is the major sponsor of terrorism in the world. With the estimated $100 billion in unfrozen assets soon to be available as Iran sanctions are lifted, more money will flow into wars where Iran hopes to expand its influence and ultimately create hegemony in the Muslim world.

But don't expect Saudi Arabia or other Sunni countries to sit idly by. The Saudis, rightly, do not trust Iran to keep its promises -- and nothing in the agreement should increase their comfort. Saudi Arabia has little choice but to pursue its own nuclear program in the face of the likelihood that Iran will build a bomb, if not secretly during the term of the agreement, then soon after it lapses.

The Iranians aren't dismantling their nuclear program; they are simply putting on hold some elements -- and even that cannot be assured. The verification regimen put in place by the agreement gives Iranians ample time to stall in order to move, hide or repurpose their weapons-creating capacity once notified that inspectors want to visit a site. The president promised 24/7 access to Iran's nuclear facilities in any deal his administration negotiated -- he accepted in its place a plan that will give Iran 24 days before it allows inspectors in and a bureaucratic maze to get there.

Of course, the country that is most endangered by this agreement is Israel. Our ally and the only democratic country in the region, Israel is small but powerful, with perhaps the best military in the world. Its people have already survived a Holocaust that destroyed one-third of the Jewish population, which ultimately led to the creation of the Jewish state. It has successfully defeated its neighbors' aggression and survived near constant threat of terrorism on its soil and against its co-religionists around the world. Does anyone really expect that Israel will stand by while Iran builds bombs and acquires missile systems that threaten its very existence?

The president has consistently maintained that he had only two choices: forge a deal with Iran or face war. It is a Hobson's choice, and the president knows it. Sanctions brought Iran to the bargaining table, but the administration's eagerness to reach a deal erases what leverage we had. Nor did the president even consider other options. The administration has never been willing to promote regime change in Iran, choosing to turn its back on protesters who took to the streets in 2009 against the regime. It has demonized the pro-democratic National Council of Resistance of Iran, which has tens of thousands of supporters both inside and outside Iran.

In the past, American foreign policy entailed working behind the scenes to promote democratic alternatives to totalitarian regimes. Not so in Obama's administration. The administration's goal has been to reassure the mullahs in Tehran, not to encourage freedom for the Iranian people.

In falsely portraying his options, the president brings us closer to a Middle East conflagration. It is not "peace in our time," but a near guarantee of more bloodshed.