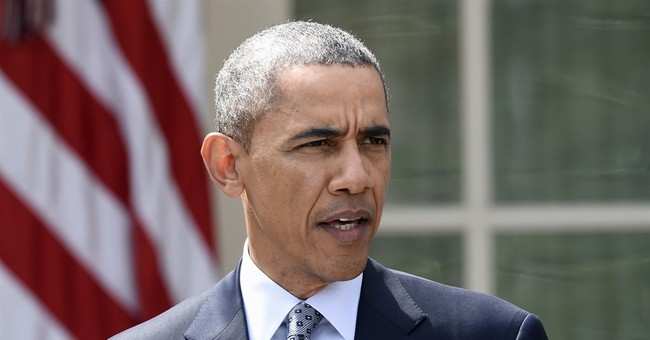 Sound like a good bargain? Well, in simple terms, it pretty much describes the framework the Obama administration has signed on to in order to persuade Iran to give up its quest to build nuclear weapons.

The U.S. and our allies agree to lift economic sanctions, which have crippled the Iranian economy, in return for Iran agreeing to hold back on making nuclear weapons for a while. They promise to convert facilities we know they have been using to enrich uranium and plutonium. They will even let us inspect some sites, though we know they have violated all previous agreements for open inspections. And we'll continue to turn a blind eye toward the mullahs' pervasive violations of human rights, especially those of women.

President Obama seems to regard as a major achievement an agreement to reach an agreement, which is all this week's deal is -- a formal agreement won't happen until June, if at all. Was ever an American president so deluded as to his accomplishments? His administration has so far botched everything it has touched when it comes to foreign affairs. Obama came into office promising to restore America's reputation. Instead, he's damaged it, perhaps irreparably for the near future.

Our allies don't trust us. Relations between the U.S. and Israel rarely have been worse, but we're not on all that great of terms with the UK or Germany, either. Do any of our allies even trust our word any longer? Why should they, when the president repeatedly has failed to live up to promises, whether to stop Russian aggression in Ukraine or to keep the murderous Assad regime from killing Syrian civilians?

Indeed, the Middle East has descended into chaos. Iraq is plagued by ISIS and sectarian conflicts between Shia and Sunni Muslims. The government in Yemen has collapsed, forcing a Saudi-led military operation that hopes to fend off Iranian-backed rebels from gaining total control of the failed state.

In North Africa, terrorists have attacked a museum in Tunisia and a U.S. consulate in Libya, and both countries face growing threats from ISIS and al-Qaida affiliates. Morocco, often regarded as the most stabile country in the region, arrested ISIS members in March who were allegedly planning attacks against military installations and plotting political assassinations.

Sub-Saharan Africa is in no better shape. Nigeria, Kenya, Tanzania, Cameroon and Uganda all have experienced Islamist terrorist attacks since 2010, killing many hundreds of victims, many of them Christians. An attack on Christian students at a Kenyan University campus left nearly 150 dead on Thursday alone. The Obama administration's response to the threat of Boko Haram has proved little more effective than Michelle Obama's tweeting #BringBackOurGirls when the terrorists kidnapped hundreds of Nigerian young women last year.

The Iranian deal is of a piece with the Obama administration's overall foreign policy. It is more capitulation to those who threaten our national security. Iran will get an immediate economic boost as we lift sanctions, which will strengthen a regime that is already ascendant as a regional power. A stronger Iranian economy will make it easier for the ruling mullahs to promote terrorism around the world and to fight proxy wars in Yemen and elsewhere. Thanks to Obama's decision to withdraw U.S. troops from Iraq, Iran is already calling the shots in those areas of Iraq that haven't fallen to ISIS.

At a Rose Garden press conference announcing the Iran deal, the president promised: "If Iran cheats, the world will know it. If we see something suspicious, we will inspect it."