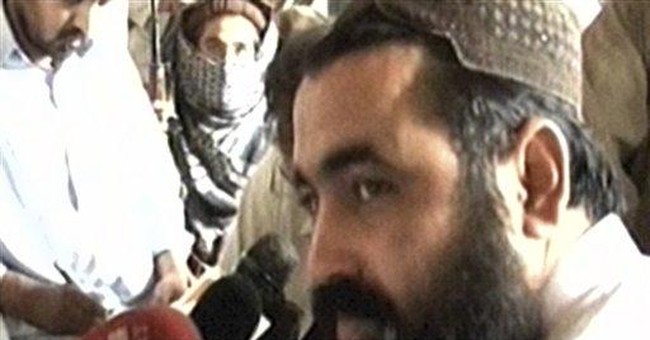 The United States' capture of three top Taliban officials inside Pakistan in a joint operation with Pakistani intelligence agents couldn't come at a better time for American and NATO forces fighting in neighboring Afghanistan. But it also raises renewed questions about the administration's detention and interrogation policies.

Presumably, these captured Taliban leaders are being held in Pakistani facilities, which is a good thing since the U.S. now has no viable alternatives of its own. President Obama closed the CIA's overseas prisons in his first days in office and banned so-called enhanced interrogation techniques used to obtain intelligence from those captured. So now we're left to rely on the Pakistanis, which puts us in a rather precarious position. Thankfully, the Pakistanis have finally become partners in the fight against the Taliban, but it hasn't always been so. For years, Pakistan gave virtual safe haven to Taliban fighters, and its own intelligence service was believed to be filled with those sympathetic to the jihadists.

But who knows how long the current cooperation will continue. And even if Pakistani cooperation persists, there are troubling issues surrounding our reliance on third parties to do our dirty work. What exactly do those who supported President Obama's decision to close down CIA prisons and ban harsh interrogation methods think is going on inside the Pakistani sites where these captured Taliban leaders are being held? Somehow, I don't see Pakistani intelligence officers referring to the Army Field Manual or consulting the Geneva Conventions in deciding how they will interrogate these new prisoners.

Indeed, the whole Obama administration philosophy when it comes to dealing with terrorists can be summarized in one word: hypocrisy. The administration has stepped up its use of drones to kill suspected terrorists in places like Yemen, and has even admitted that it will target U.S. citizens suspected of being terrorists. News organizations reported that President Obama personally approved on Christmas Eve an attempted assassination of American-born radical cleric Anwar al-Awlaki, who had ties to both the Army major accused of killing 13 persons in the Fort Hood massacre and the Nigerian man who tried to bring down a U.S. airliner near Detroit on Christmas Day.

Now, I am all for going after terrorists and killing them, if we can, before they hit us. But it is sheer hypocrisy to say that we have the right to kill a terror suspect, even a U.S. citizen, so long as we do it thousands of miles away; but if we happen to capture someone red-handed -- or should I say red-underweared, in the case of would-be bomber Umar Farouk Abdulmutallab? -- we have to read them their Miranda rights or at least make sure they're not handled too roughly.

Maybe we are lucky we haven't caught Osama bin Laden yet. What exactly would the Obama administration do with him if they did? Would the administration partner with another country -- preferably one with fewer qualms about the methods it used to obtain information -- so that the Obama administration's hands could remain clean? And where would we put him? The administration has taken Guantanamo away as an option. We could leave him overseas in another country's prison, but how secure would such an arrangement be? And if we transported him back to the States, would we have taxpayer-funded lawyers ready on the tarmac to ensure his rights?

The administration needs some consistency in its policies. The priority must be protecting American lives. If that means killing terrorists overseas who have already killed Americans or helped others to, so be it. But if it's not immoral to kill someone suspected of terrorist acts, why is it worse to subject him to harsh interrogation techniques, especially if doing so might actually save additional American lives? And is it more humane to let captured Taliban leaders rot in a Pakistani prison or bring them to Guantanamo, where they'll get three square meals a day, plenty of sunshine and their own copies of the Koran?