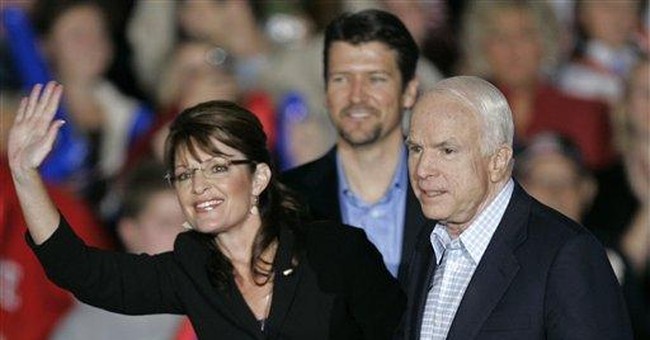 Many on the Left are hopeful that this election will drive the nail in the coffin of the conservative movement. There is some cause for legitimate concern among conservatives. No matter who wins the election, conservatives will have a more difficult time making our influence felt than at any time in recent memory.

For all his many admirable qualities, John McCain has never been a movement conservative. If he's elected he will be just as interested in forging bipartisan compromise as he will be in standing on conservative principle.

If Barack Obama becomes president, conservatives will have a convenient foil. But the weakness of our movement now makes it less likely that conservatives will be effective in stopping the worst excesses of an Obama administration. The Obama-Reid-Pelosi juggernaut will likely roll over any conservative opposition, unless conservatives come together and bring the American people with them.

But conservatives have been down before -- and it is too early to count us out. Conservatives watched their hero, Barry Goldwater, lose the presidency in 1964, but we found a more appealing and effective standard-bearer in Ronald Reagan. A decade and a half later, Reagan was in the White House and the conservative movement was ascendant.

If conservatism is to rise again, however, it must offer a coherent and compelling alternative, both to the politics that have dominated this election cycle and to the past eight years of GOP leadership. With no obvious successor to Reagan waiting in the wings to reinvigorate, much less reinvent, 21st century conservatism, we will not be rescued by the charisma of a single individual.

The first task is to define what conservatism stands for today. In the Reagan era, it was lower taxes, smaller government, a strong national defense, and resistance to the culture of permissiveness that was the byproduct of the Sixties and Seventies. Fiscal conservatives, defense hawks, and social conservatives worked side by side contentedly in the Reagan coalition. But that coalition has been badly frayed during the past eight years.

Conservatives have watched as a Republican White House and GOP-controlled Congress enlarged government, expanded domestic programs, and raised a mountain of debt. The collapse of credit markets in the past few weeks has also occasioned the greatest government intervention in the free market since the New Deal -- but this time led by a putatively conservative and Republican administration.

Since Reagan, conservatives have also been impotent to prevent the counterculture from becoming the mainstream culture. And with the fall of the Soviet Union, conservatives even began to split over national defense. Islamic fundamentalism poses a grave threat to the West; I would argue, as great a threat as communism. But conservatives differ not only over how best to counter it but whether Islamism can or should be defeated.

So what are the pillars of conservatism today? Clearly, a commitment to individual rights, limited government, and free enterprise has historically had the broadest appeal within the conservative movement. But where does that leave social and religious conservatives? Will the new conservatism provide a place at the table to those who are more motivated by moral than by economic issues? And while all conservatives would say they believe in a strong national defense, there remain irreconcilable disagreements among the different factions of the conservative movement on how to keep America strong.

Perhaps adversity will prove to unite conservatives. If, as many of us fear, an Obama administration and an expanded Democratic congressional majority move the United States closer to European-style social democracy, conservatives will coalesce to resist it. But, to be successful, we must offer an alternative vision -- one that appeals beyond movement circles to the general public.

Americans intuitively know that free market capitalism creates wealth that benefits more people than government redistribution, but their faith has been tested in recent weeks. And with an Obama administration promising an ever-expanding welfare state -- and more importantly, one that provides benefits to the middle class, much as European social democracies have for decades -- Americans will be tempted to think they will be better off if government decides to "spread the wealth around."

Conservatism rose phoenix-like out of the ashes of the Goldwater defeat. It will take a similar feat to rescue the movement now. No less than the future of the United States depends on it.