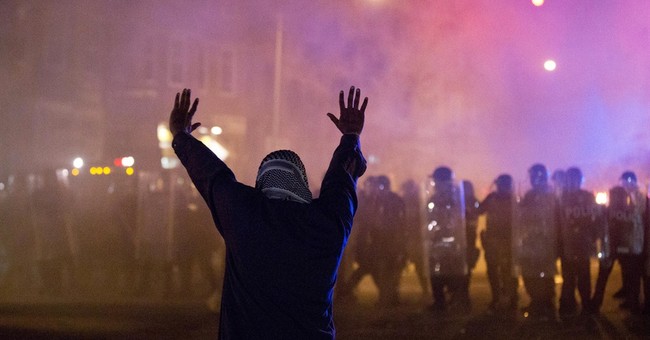 We haven’t heard much about the father of Freddie Gray, the 25-year-old man whose mysterious death while in police custody ignited savage race riots and attacks on innocent citizens across Baltimore.

We also haven’t heard much about other Baltimore fathers parenting their children in the midst of the chaos.

Instead, we have seen government agencies trying to police the youth through a show of force while still allowing juvenile delinquents to commit crimes. We see complete strangers trying to talk sense to the kids. We see criminal gangs masquerading as noble citizens and managing the chaos through a well-deserved reputation for vengeance. We have seen a desperate single mother trying to discipline her teenage son, but we haven’t seen fathers.

Where are the fathers? This is the uncomfortable questions liberals refuse to ask.

Sure, the government can manage this chaos to some degree through force and coercion, but fathers can influence order and discipline through love and devotion.

How much of the violence and rebellion in Baltimore is simply a consequence of the destruction of families?

How much has the moral decay of society contributed to the acceptance and tolerance of men who feel no responsibility for children they’ve created?

How much of a child’s rage and anger comes from feeling abandoned or unwanted by their fathers?

Eighty-five percent of the youths in prison are from fatherless homes. Children without fathers account for 63 percent of youth suicides, 70 percent of teenage pregnancies, 80 percent of rapists with displaced anger, 85 percent of children with behavioral problems, and 71 percent of high school dropouts.

The left’s immoral and destructive dogmas coincide with the rise of these deplorable statistics. Addictive and debilitating welfare, the moral relativism of multiculturalism, no-fault divorces, a utterly disastrous urban school system, and government intrusion into parenting practices have done nothing -- but eliminate personal responsibility and accountability from society.

It is common knowledge now that 72 percent of black children grow up in homes without a father. Less than 60 years ago, 78 percent of black families were in tact with a father and mother at home.

Furthermore, despite the incredibly low graduation standards public schools have today, nearly 50 percent of black males now drop out of school. Of course, black children are not alone in the disaster liberals have created by replacing a father’s work, love, and discipline with government entitlements, liberal psychobabble, and a victim mentality.

Self-destructive behavior is far too common among youths without dads dedicated to their lives. Occasionally, a handful of fatherless young people overcome the steep odds. But the vast majority of fatherless children simply proliferate the cycle of dysfunctional youths with half-siblings who have no relationships with their fathers, either.

Statistics about absent fathers reveal plenty concerning the mayhem the media shamelessly avoids. On the other hand, personal experience often reveals more than numbers. My work as a teacher and a coach has made me more familiar with the effects of fatherless children than I often wish I were. But ignoring the ugly reality doesn’t change the painful truth.

Who is teaching us that the government can replace fathers by providing for children through welfare, food stamps, and detention centers disguised as urban schools? So long as unmarried moms remain unmarried, the government will supply them with addictive handouts.

Are Christian values teaching this message? Are white conservative males responsible? Is America’s tradition of self-reliance, independence, and limited government to blame?

At Freddie Gray’s funeral, Reverend Jamal H. Bryant blamed Freddie’s death on being “man enough to look someone of authority in the eye.” The reverend claims to believe that the police “figured [Freddie Gray] was a threat” because “they are used to black men with their head held down low. And “their spirit broken.”

As paranoid and delusional as the reverend’s imagination should sound to any person no longer mentally stuck in the 1960s, liberals cannot deny that Rev. Bryant’s message is great fatherly advice for liberal derelicts who do not want to accept responsibility for their own self-destructive values and bad behavior.

Freddie Gray had a tough life, no doubt. However, no one forced him to become a serial criminal at the age of 18. Liberal agendas, not cops, rob kids like Freddie of the opportunity to have devoted fathers and to receive meaningful educations.

The Washington Post reported that Freddie was four grade levels behind in reading when he was 17 years old. This is not uncommon for children stuck in inner-city schools. No student can learn in classrooms where normal students are confined with kids who become derelicts and hoodlums and have no father committed to their lives.

Then again, why should America worry about fatherless kids destroying their own city? Liberals and the government will provide for them. Liberals just need more money to give the children what they need.

As for Freddie Gray, who has time to talk about his father and the value of traditional families? There’s too much looting to be done in Baltimore. The kids there are just taking what liberals have taught them they need.