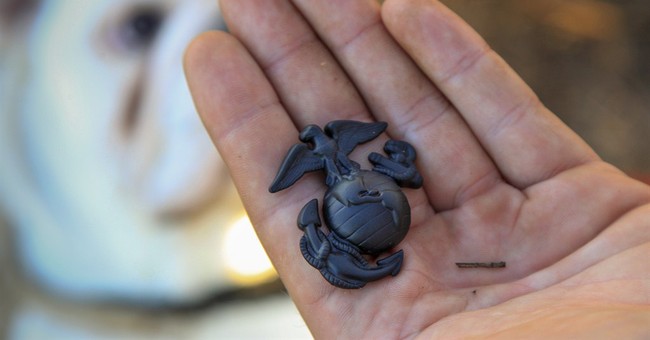 To have earned the honor of wearing the eagle, globe, and anchor remains one of the most memorable experiences of my life. I feel privileged to be part of a unique breed of men and women who have also worn the Marine Corps insignia. And like other veterans, I am just honored to have served our country.

I know I was blessed to be the son of a Marine fighter pilot who once thundered over America’s enemies with his nom de guerre “Stump.” My dad’s colorful explanation for his call sign (which was also his childhood nickname) is not appropriate for a civilized audience, so I will spare you from my dad’s Marine Corps charm.

Nevertheless, speaking of colorful, I am also proud to be the younger (but bigger) brother of a Naval Academy graduate--who, thanks to our father, was a little too rough around the edges for the Navy. But his unrefined issues were almost ideal for the U.S. Marines.

I have the Marine Corps to thank for a beautiful wife, as well. She is a former “WM” (a.k.a. Woman Marine). Additionally, she is the proud daughter of a retired Navy Seabee, Captain DC Black.

Yes, it’s safe to say that we’re a military family, and we wear that description as a badge of honor.

Military service is a privilege, as I have met many great people like my friend Colonel John Neville. John is a leader and man that I could not admire or respect more.

I am also grateful for the leadership of my former commanding officers Colonel Willie Simmons and Colonel Dennis Loftis--two warriors who helped to instill Marine leadership traits and esprit de corps in the men and women who had the good fortunate to serve under them.

Most of all, I am just proud to be associated with every other Marine who has served honorably to this day.

While I am clearly partial to the Corps, my recent trip to Arlington National Cemetery, just two weeks ago, has made this Veteran’s Day particularly meaningful.

October 29, 2014, I attended the funeral of Army Private First Class Harry Edward Seiler. It was my first trip back to the cemetery since I was a child growing up not far away in McLean.

I remember visiting the cemetery many times with my dad and family back then. One of those trips was with Private First Class Seiler--who at that time, I simply knew as Uncle Harry.

Gracing the sea of pristine white headstones on my recent trip, two funerals processions led by the Caisson Platoon marched through the immaculately groomed streets. One detail was for a Navy family and the other was for an Air Force family. I watched these ceremonies in awe of what was occurring--the level of sacrifice that surrounded me became powerfully clearer.

I have never been more humbled by God’s grace than at that moment as I thought about having been born an American. The gratitude for my freedom thanks to the selflessness of those who surrounded me can only be expressed in tearful respect.

I’m not sure what I was expecting that day. Uncle Harry passed away 15 years ago. But thanks to the work of his niece Marianne Bradshaw, Private First Class Harry Edward Seiler would finally receive the honorable tribute that his sacrifices and fighting in World War II deserved.

Like most combat veterans, Uncle Harry did not talk about the hell he endured on behalf of our nation. However, as I sat during his funeral, I thought about the one story he shared with me to erase the romantic and childish idea I once had of war.

One of the horrors PFC Seiler witnessed in battle caused him to throw up in his helmet and then to pass out. In fact, he suffered from PTSD for the rest of his life as a result of his combat experiences. Once he came home, he would never fly on a plane again.

On the other hand, I wasn’t surprised to learn at his funeral that Uncle Harry never told me he had been awarded the Purple Heart or that he had been credited with saving a friend’s life in battle. Thanks to Uncle Harry, his friend did not lose two badly mangled legs or his life. No, these are only stories that family members can cherish.

For Uncle Harry, he preferred to talk about the animals at the National Zoo while we sat together on the benches there, eating jelly doughnuts. Spoiling my siblings and me is what Uncle Harry was famous for to us.

Ultimately, however, I just wondered what it would take for more Americans to be willing to make the sacrifices these men are making--or those that were made by selfless Americans like Uncle Harry.