Laura Hollis
|
Posted: Jul 09, 2020 12:01 AM
Share   Tweet
The opinions expressed by columnists are their own and do not necessarily represent the views of Townhall.com. 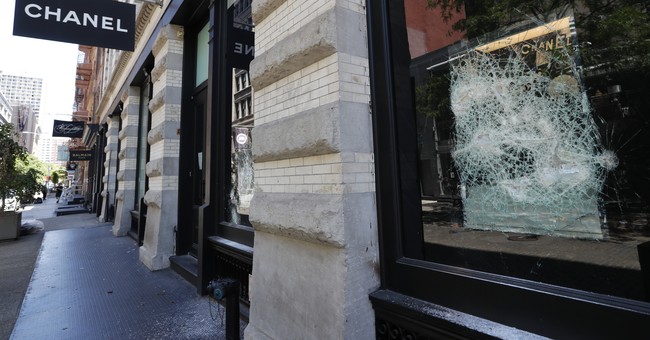 "I can't imagine why you're bothering me when there's rioting in the streets." -- Dr. Whiteface

"Ah, well ... we shall deal with that later. But Captain Vimes always told me, sir, that there are big crimes and little crimes. Sometimes the little crimes look big and the big crimes you can hardly see, but the crucial thing is to decide which is which." -- Corporal Carrot

One subtheme running through Sir Terry Pratchett's Discworld series of fantasy novels is the desire of some residents of the principal city, Ankh-Morpork, to overthrow the existing government and install a king. In the novel "Men at Arms," as quoted above, for example, we see characters fomenting discord between groups living in Ankh-Morpork (humans, trolls, dwarves, etc.), even going so far as to commit murder to inflame passions, rouse suspicions and resurrect old hatreds simmering just below the surface. Predictable mayhem results: widespread violence and rioting, the destruction of property and the general breakdown of order.

It would appear at first blush that the murders are the "big crimes." But, in fact, they are part of a larger scheme to exploit the unrest and create broad public support for "regime change." Needless to say, those pushing for the change see themselves as the rightful leaders.

We're watching a similar dynamic play out here in the United States. Widespread civil unrest -- riots, looted stores; burned buildings; vandalism and destruction of statues and other monuments -- was all prompted, we're told, by the callous killing of George Floyd, a Black man, by a white Minneapolis police officer.

And yet, despite universal outrage at Floyd's killing, the "protests" have spiraled into generalized attacks on the country. Mobs have appeared in nearly every major city. Some cities have had little breakaway fiefdoms form -- pockets of protesters living in armed enclaves from which law enforcement is kept out, and where violence and crime erupt. Governments had, until recently, largely capitulated, much to the chagrin of city residents and observers nationwide.

Similarly, the initial demands -- for justice and police reform -- quickly expanded to "defunding" or completely eliminating police departments, allowing immigrants here illegally to vote and releasing all convicted felons from prison. And they continue to expand. Most recently, Minnesota Rep. Ilhan Omar called for "dismantling the whole system of oppression," a comment widely viewed as calling for the restructuring of the entire American political and economic systems.

The targets of the protesters' ire have also expanded, as represented by the attacks on local, state and federal statues and monuments. Some years ago, it began with calls to remove statues of Confederate generals and soldiers. Since the Floyd protests erupted, however, that has grown to include a large number of American presidents (Washington, Jefferson, Lincoln, Grant, Roosevelt, Wilson) and philanthropists (Yale, Stanford, Rhodes) whose statues must come down, and whose names must be removed from monuments, buildings and schools.

The racism focus has moved beyond Black Americans to the historical treatment of Native Americans, as represented by CNN's remark that President Donald Trump's July 3 speech at Mount Rushmore would be "in front of a monument of two slave owners and on land wrestled away from Native Americans." There have been renewed calls for sports teams like the Washington Redskins and the Cleveland Indians to change their names. (If this push continues unabated, half the states and cities in the U.S. will need to be renamed.)

Most Americans seem caught off guard by the magnitude of the tumult, which has exploded and consumed the country like a pyroclastic cloud. We're told that all of this is spontaneous, and we're expected to believe it. History suggests otherwise. It's no accident that the leaders of the Black Lives Matter organization (as opposed to those who are simply asserting that statement as a theme for change) identify as "trained Marxists." It's always been the modus operandi of Marxist revolutionaries to exploit -- and foment -- tragedy and public dissatisfaction, to call for "change," to promise utopia -- and to deliver misery.

The "cancel culture" and vicious attacks on free speech are also part and parcel of the Marxist mindset, right down to the "purity tests" and purges. Just this past week, an open letter was published in Harper's Magazine, signed by 153 largely left-leaning artists, authors, reporters and other public intellectuals, that calls for a renewed respect for freedom of speech as a necessary pillar of a free and liberal society. Within minutes of the letter's release, signatories were viciously attacked by the left. And some -- predictably -- apologized and recanted.

People began remarking upon this phenomenon with astonishment within the past few years, after a number of violent incidents involving conservative speakers on college campuses. The truth is that this ideology took root in our institutions of higher education decades ago and has now spilled out in earnest throughout the rest of society.

It's quite clear that there are larger forces at work here. Those committed to the "fundamental transformation" of America into a Marxist-socialist state think that this is their moment; that they can hide behind a grassroots groundswell of support for African Americans' calls for fairness, justice and equal access to the economic liberties the United States has to offer.

Marxism has failed everywhere. We need to defeat this noxious ideology once and for all. We cannot allow ourselves to be distracted by the "little crimes" and utterly overlook the larger movement afoot that threatens all Americans' liberty and prosperity.