Politics, Process and the Presidency

Laura Hollis
|
Posted: Jan 07, 2016 12:01 AM
Share   Tweet
The opinions expressed by columnists are their own and do not necessarily represent the views of Townhall.com. 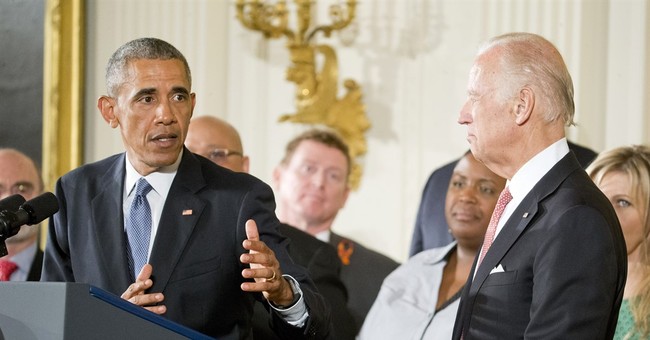 I do not see any constitutional crisis inherent in what some like to call "common-sense" regulation of firearms. Background checks are logical in appropriate cases, as are efforts to keep guns out of the hands of people who are legitimately mentally ill (leaving aside for the moment the serious task of defining the sort of mental illness that would disqualify someone for gun ownership).

Some of the debate over the content in President Obama's 23 "executive actions" (having even less legal effect than do "executive orders") on gun control seems overwrought. Take the idea of who is a "firearms dealer." Much ink has already been spilled over whether private sellers of guns ought to be considered "dealers," subject to federal laws, including the requirement to perform background checks before sales.

I'm not suggesting that concerns are inappropriate. To the contrary: An overbroad definition of "firearms dealer" will sweep millions of unsuspecting individuals into the federal net, with attendant licensing, fees and penalties for noncompliance.

I'm suggesting that a reasonable definition need not be complicated. The Uniform Commercial Code can be used as an exemplar. The UCC has been adopted, in whole or in part, by all 50 states and the District of Columbia. Throughout the UCC, "merchants" are held to a different standard than other sellers, and Article 2 of the UCC defines a "merchant" as "a person who deals in goods of the kind or ... who by his occupation holds himself out as having such knowledge or skill peculiar to the practices or goods involved in the transaction."

In other words, not ever seller is a merchant. I might be selling my old lawn mower at a garage sale; that doesn't make me Ace Hardware. There is no reason to require me to obtain a license to sell lawn mowers; or to make warranties about the quality of my lawn mower; or to make sure that the person to whom I am selling a lawn mower knows how to use it. If selling lawn mowers is my occupation, however, then that's different.

Just so, someone selling the occasional firearm ought not to be considered a "dealer" within the meaning of federal legislation. Any assertion to the contrary is ridiculous overreach.

That said, much of what President Obama is attempting to do is overreach. It's optics. It's politics. And it isn't the first time. The president has issued numerous executive orders on immigration -- at a time when public sentiment is deeply divided and increasingly negative, due to threats of terrorism, diminishing wages and tens of millions of Americans out of work.

As big a concern as Obama's forays into immigration or gun control are, the larger issue is that of presidents using executive decrees to effectively write laws when Congress will not pass legislation that they want. (For the record, Obama has issued nowhere near the highest number of executive orders. That honor belongs to FDR, followed by Woodrow Wilson and then Calvin Coolidge. In fact, Obama has issued fewer executive orders than his predecessor, George W. Bush. )

It's not significant or constructive that millions of President Obama's supporters are cheering him on (as they did with his orders on immigration). They are not paying attention to precedent.

Imagine if a conservative Republican were to be elected in 2016, and committed to the idea of putting Planned Parenthood and butchers like Kermit Gosnell out of business. Frustrated with Congress' inaction, President X decides to issue an executive order eliminating the federal funding for Planned Parenthood, and has his secretary of the Department of Health and Human Services announce a new regulation requiring all doctors who perform abortions to have practice privileges at one or more local hospitals. (Most states do not have such requirements, and some recent state legislative efforts -- like Wisconsin's -- have been struck down by federal courts.)

Would those praising President Obama's "leadership" on gun control be as sanguine about comparable actions taken by a political opponent on the issue of abortion?

The Constitution is quite clear that it is Congress who writes the laws and that the president of the United States is charged with executing them. The process of lawmaking is messy, tedious and frustrating. Politics is far more exciting than legislation and process. But it is process -- following the rules -- that makes politics possible. Without process, it isn't politics; it's nothing more than raw power.