Politics, Poverty and the Pope 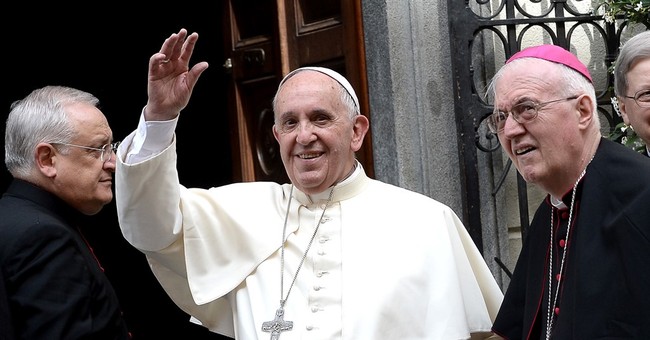 Pope Francis is in the news again, not only for his recent environmental encyclical, "Laudato Si," but also for his off-the-cuff comments about businesses that manufacture weapons and those who invest in those businesses. In a nudge-nudge-wink-wink accusation of hypocrisy, he suggested that claims of Christianity made by those involved in the weapons industry create "a bit of distrust."

As per usual, there are those who wrench the Pope's words out of context and ignore the aspects of his remarks that do not conform to their political worldview. Even so, there is some interesting subtext here.

First, it is ironic that the pontiff would choose to criticize weapons manufacturers in the same speech in which he decried the Holocaust. It is true that weapons can be and have been used for aggressive and immoral purposes. But the American GIs and Allied forces that liberated the concentration camps and brought World War II to an end could not have done so without the weapons they carried. It is further worth noting that German Jews were able to be rounded up, carted off and slaughtered at least in part because they were precluded from manufacturing or dealing in -- and therefore, presumably, from owning -- guns or ammunition under the 1938 German Weapons Act. Any student of history knows that a disarmed and defenseless population is the necessary first step for any would-be dictator or despotic regime -- a fact evident to the drafters of the United States Constitution over 200 years ago.

Second, although Pope Francis acknowledges the value of business (he refers to it as a "noble vocation" in "Laudato Si"), he nevertheless sounds the predictable leftist alarm and calls for global governments to rein in the excesses of business. This, too, is deeply ironic, particularly for a pope from Latin America, which has seen such consistently oppressive political regimes and resulting economic turmoil. (Hugo Chavez's socialist government nationalized Venezuelan businesses and plunged the country into abject poverty. They now suffer from chronic shortages of medicines and basic goods such as toilet paper.)

It is especially galling when it is tied to denunciations of poverty, as it so often is in Catholic writing. It is not business that creates and perpetuates poverty, but political corruption. That corruption appears whenever political power becomes concentrated in a few hands, whether those hands belong to kings, communists, or congressmen.

Business, on the other hand -- at least in the European and American tradition -- is the great equalizer. Business diffuses power, placing it in the hands of the average person who has the ability to become an entrepreneur. And it is business that has tempered the excesses of political oppression, not the other way around.

Barbara Tuchman writes compellingly about this aspect of European history in her classic book, "A Distant Mirror." The rise of the mercantile guilds in the Netherlands during the Middle Ages, she explains, created a path to prosperity, and a way out of poverty that depended neither on one's birth status (royalty or nobility), nor the willingness to fight and die in the military or enter a religious order. A new class of people emerged -- a middle class, comprised of merchants and their apprenticed employees.

Despite (or perhaps because of) the increased social options and economic growth, the nobility and the Catholic Church -- prevailing power structures at the time -- feared the rise of the merchant class, and passed regulations like sumptuary laws (which prohibited guild members from wearing rich fabrics and colors otherwise limited to royalty and the Church) to keep them in their place.

In the United States, our economic success is often associated with what is referred to as the "Protestant work ethic." This is not because Catholics (as well as members of many other faiths) have not worked hard or become successful -- quite the contrary, in fact -- but because it was Protestants who asserted the view that God rewarded hard work with blessings in the here-and-now.

Of course, business, like all human activity, requires regulation. And enforcement of regulation requires government. But it is no accident that Americans note more deceit, bribery, dishonesty, graft and waste in our own government today. It is because our government has become too large, too bureaucratic and too removed from the people, even while it exerts more and more control over our lives. The more powerful and intrusive government becomes, the more money there will be in it -- and this benefits not innovators, entrepreneurs and small businesses, but huge, largely unaccountable multinational corporations that can afford to buy influence and exemptions for themselves. The leftists' calls for more government are the consummate irony, as this will only exacerbate the problem.

The expansion of business goes hand in hand with increased prosperity and increased liberty. Free commerce depends upon the power of persuasion. Without it, there is little left but poverty and the power of the pistol.

So, Your Holiness, if you would truly prefer fewer weapons, then what you want is a world with more business, and less government.