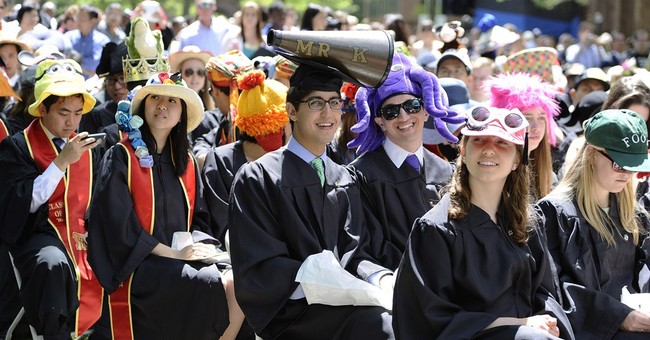 In Roland Joffe's 1984 film, "The Killing Fields," we see the Cambodian Communist revolution and its aftermath through the eyes of Dith Pran, the film's main character. In one iconic scene in a Khmer Rouge re-education camp, Pran looks on while children march in a circle, fists pumping in the air, chanting Khmer Rouge propaganda. Elsewhere, a group of seated adults are encouraged by party leaders to admit their bourgeois pasts and come forward. They are promised a fresh start in the "new" Cambodia. This, of course, is a ruse; having identified themselves, they are then taken out and shot.

Anyone who has studied history will recognize these as signature tactics of contemporary extremist political movements, not only in Cambodia but in North Vietnam, China, Laos, North Korea, Cuba and every socialist republic in the former Soviet Union. Truth and inquiry are replaced by propaganda. Education becomes indoctrination. All speech save that which has been pre-approved is forbidden. Those with opposing viewpoints are mocked, dehumanized and finally silenced -- typically by imprisonment or death.

The justifications are always the same: Such strictures are necessary to remediate "oppression." One group (the "oppressed" and their ideological allies) is in possession of all "truth." Questions and competing arguments are dangerous to society, and those advancing them are enemies, against whom any and all tactics are warranted.

What is notable about these regimes is not only the brutality and misery they inflict, but the steel-booted certainty of their adherents. It is alarming, therefore, to see the speed with which these kinds of attitudes are seeping into the public discourse and political activity in the United States.

By way of example, college campuses, intended to be bastions of vigorous inquiry, have taken on a vague whiff of leftist authoritarianism:

--Unpopular viewpoints are characterized as threats to student "safety," or contributing to a hostile climate. Conservative speakers are shouted down, pelted with pies or -- increasingly -- "uninvited" out of fears of public disorder or violence.

--In classrooms and extracurricular activities across the country, discussion of innumerable topics is preceded or even precluded by "trigger warnings" -- calls for "sensitivity" so indiscriminate and sweeping that faculty of all political stripes find themselves silenced and infuriated.

--The new accusation of "privilege" effectively silences or discredits anyone who is male, or white, or Christian, or Jewish, or upper-middle class, or not disabled, or raised in a family with both parents, or not the victim of a crime. Charles C. W. Cooke recently described an exchange at the University of North Carolina, in which student comments included, "You don't question when someone you have privilege over speaks to you about oppression" and "Don't tell me what's oppressive. I tell you; you shut up and listen."

Odd sentiments to be expressed at institutions of higher learning.

Nor is this limited to higher education. As recent events in Indiana and Oregon demonstrate, Christians who wish only to go about their business and live their faith must be hauled out into the public eye, mocked and shamed, threatened, driven out of business -- all for holding a personal viewpoint that is presently unpopular. Those who attempt to assist them must be thwarted as well. After a GoFundMe site raised over $800,000 for the owners of Memories Pizza in Walkerton, Indiana, the crowdfunding company shut down a similar effort to help Oregon bakers Aaron and Melissa Klein defray a $135,000 judgment imposed when they refused to bake a cake for a lesbian wedding.

Perhaps most disturbingly, these tactics have moved into the political arena. The Wall Street Journal and National Review have reported extensively on "John Doe" raids in Wisconsin, instigated by political opponents of Gov. Scott Walker, and targeting his supporters and other conservatives. Police battered down doors, threatened people and their children, confiscated their property and forbade them to speak to anyone -- even counsel.

No, this isn't Cambodia. But there is cause for concern in a climate where differing beliefs are not allowed; where opposing views are silenced by sweeping and unsubstantiated accusations; where your livelihood can be destroyed by hate campaigns on social media; where those who threaten your safety publicly proclaim their justification in doing so; where political opponents use vague and overbroad laws to break down your door, terrify your children, seize your property, intimidate you into silence and deprive you of legal recourse; and where social pundits call for violence against those with whom they disagree.

In a timely New York Times piece on cyberbullying this week, author Nick Bilton quotes Friedrich Nietzsche: "Be careful when you fight the monsters, lest you become one."

We must avoid the dangerous certainty that our opponents are monsters in the first place.