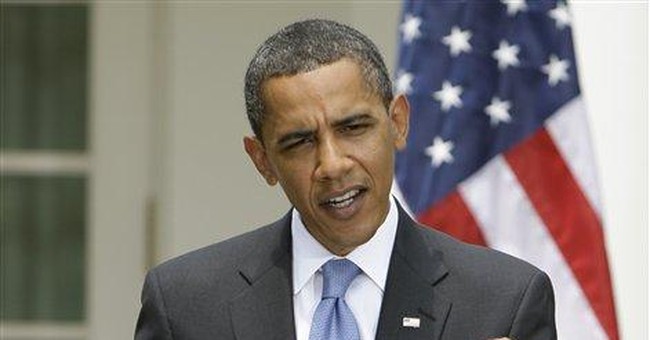 How many Americans, enamored with über-Lefty Barack Obama’s promise of “hope” and“change” have stopped to consider what America will look like when made over in the liberal ideal? One need only look at GM and Chrysler to see what this presages for the rest of private enterprise in this country.

Liberals profess to “love” all kinds of things: whales, polar bears, snail darters, the planet. Strangely, few of them are human. Or anything that makes humans’ lives better. What seems to drive most liberals is hatred and a need for control. What they control, they destroy. And there are few things they hate as much as American business.

Michael Moore is a perfect example. He has peddled his “love” for the working man for at least two decades. But when the corporation that employed tens of thousands of blue collar workers and put millions of Americans into affordable vehicles goes belly up, what does he say? “The company's body is not yet cold, and I find myself filled with -- dare I say it-- joy.”

Oh,there is no question but that General Motors has made catastrophic mistakes in its history. Pundits have written about its ponderous decision-making processes, its intransigent leadership and its dull designs. What few have remarked upon, however, is that General Motors’ business model was a liberal’s wet dream: for every person working for it, it was supporting ten more.

We should not be surprised that liberalism’s approaches to business are failures. Consider its 40-year reign over our social policies, and witness the legacy:

Liberals wanted to redefine marriage and remake the family. The result? A divorce rate that now hovers between 45 – 50%, a precipitous decline in the number of two-parent households (a primary indicator of poverty), a birthrate that barely replaces the population (with corresponding devastating consequences for Social Security) and an illegitimacy rate of close to 40% (among African-Americans it is over 70%). Need we mention welfare’s role in all of this?

Liberals wanted to revamp our public education system.  Now we perform at embarrassingly low levels, despite staggering per capita spending, even compared to some of the poorest nations in the world. As two experts have said, “The public schools lack focus; instead of concentrating on education, they dabble in social re-engineering.” And “Half our job is education, and the other half is social work." This is liberalism at its finest.

There is a lesson here for any well-meaning person intending to follow liberals down their well-trodden corridors (with apologies to Roger Waters).

Liberals have hated the internal combustion engine, blaming it for pollution (later,“global warming,” and then, after numerous record-breaking winters, “climate change”), “urban sprawl,” the end of inner cities, the devastation of public schools and on and on ad infinitum.

They hate farming. Oh, not penny ante, backyard, organic farming. They hate the kind of farming that takes hundreds of acres of land and feeds hundreds of thousands of people.

They hate power companies. Nuclear power poses too many risks. Coal and natural gas pollute. But what does that leave? Solar? Only good when the sun shines. Wind? Only good when the wind blows. And wood? Ah,ah, ah – can’t do that – that contributes to deforestation.

They hate the military. For that matter, they hate guns and ammunition generally. (Unless, of course, they remain in the arsenal of a left-wing dictatorship, in which case they’re just dandy.)

They hate the Judeo-Christian tradition.

For decades, liberalism has crept surreptitiously through our courts, our educational system and our media. Now, with the election of Barack Obama and a Democrat-controlled Congress, liberalism is in full glory and ascendant. All the things they have loathed in private, they can now assail in public. And American businesses are at the top of the list.

Having nearly destroyed the American housing market and the related financial sector,and crippled the American automotive industry, the Obama administration now turns its attention to tobacco. As an ex-smoker, I loathe smoking, and God only knows how much money is spent on illnesses attributable to it. That said, it is a legal activity for adults, destructive though it may be. Liberals have a stereotypically schizophrenic relationship with the tobacco industry; it is among their favorite whipping boys (I know, they have so many), and yet they need its tax revenues as a vampire needs blood.

The reaction of the tobacco executives – like that of the automotive executives,and the housing executives, and those in financial institutions – reflects a frequent and fatal error of judgment. They tell themselves that they can“work with” whatever administration is in power, and they flatter themselves that political contributions will assure their survival.

Fools. Karl Marxsaid, “The last capitalist we hang shall be the one who sold us the rope.” That adage needs to be modified a bit for today’s political reality: the last company to hang will have taken the rope from the Obama administration, tied to a millstone of cash.

After tobacco, it will be the turn of the energy companies. And then pharmaceuticals. Then hospitals. And doctors. Each time, Obama will have some distorted and horrific narrative about how these industries, and the people in them, have contributed to the sufferings of untold numbers of Americans, how he and he alone can fix things, and how it must be done <i>now</i>. Never mind the jobs these industries have produced, the workers and farmers, chemists and engineers, physicians and nurses they have employed, the vehicles they have manufactured, the life-saving drugs they have developed, the surgeries and other medical procedures they have performed, the heat and light and refrigeration they have provided – and all of this done for hundreds of millions of people in this country and around the world.

Obama will take them all over, one by one, and Obama will destroy them.

(Side note: Obama’s “drug czar,” Gil Kerlikowske, said recently that legalizing marijuana is not part of Obama’s plan. Too bad. As a Libertarian I support eliminating the billions we spend on interdiction, freeing our prisons from the thousands of inmates there for marijuana-related offenses, and halting the corruption we foster in countries that produce the drugs for our insatiable demand. On the other hand, illegal drug sales may be the only business we have left. Plus,if the Obama administration were truly serious about addressing the illegal drug problem in this country, they would legalize them,and then put the government in charge of the entire industry. Nothing would kill it faster.)

Some commentators dismiss concerns about Obama’s interference in private enterprise,arguing that the only businesses affected are huge, multinational corporations already in peril. This is nonsense. When government and big business are in bed together, the one squeezed out is the entrepreneur. As author Clayton Christensen has observed, innovators ignore the market dominance of established firms. In a system with free competition, this results in new products, new services, new business models and new successes – all to the benefit of the public. But when big business is propped up by big government, market dominance becomes imbued with the force of law. Anyone challenging that system – the innovator, the disruptor, the visionary, the entrepreneur - becomes a lawbreaker. Seniorsecured bondholders in General Motors are sadly aware of this.

Hailed as a god, Obama now seeks to “remake America” in his own liberal image. How devastating this will be. He is a man who has created nothing, invented nothing, designed nothing, manufactured nothing,produced nothing. When he is finished, we will be left with nothing.