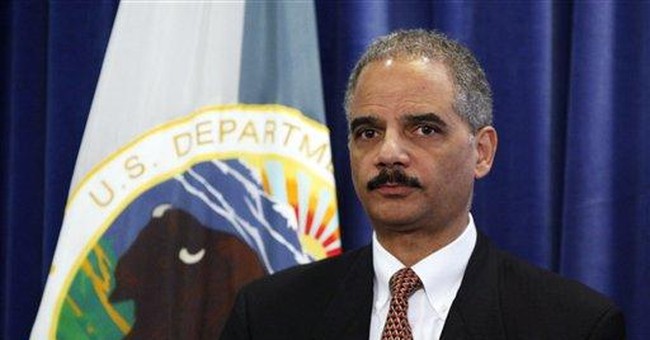 One idea that transcends political lines is that blacks are inferior and should be held to lower standards in perpetuity.

In 2007, the Department of Justice (DOJ) under George W. Bush filed suit against the New York City Fire Department (FDNY) for violating the Civil Rights Act. The Vulcan Society, a fraternal organization of black firefighters, joined the lawsuit. Did the department hire and fire based on race? Did it deny promotions based on race? No. The department requires all candidates seeking employment, regardless of race, to take an exam that assesses "reading comprehension, problem solving, spatial recognition and applying rules to general concepts." For reasons that will be discussed and debated until the end of time, blacks as a group don't score as well as whites on such tests.

Earlier this month, Barack Obama's DOJ filed suit against New Jersey and its Civil Service Commission for using an exam that "discriminates" against blacks and Hispanics, because these groups scored "statistically significantly lower" than whites.

"This complaint should send a clear message to all public employers that employment practices with unlawful discriminatory impact on account of race or national origin will not be tolerated," Assistant Attorney General Thomas Perez told The Star-Ledger. "The Justice Department will take all necessary action to ensure that such discriminatory practices are eliminated and that the victims of such practices are made whole."

The disparate impact theory of liability was articulated in Griggs v. Duke Power Co. (1971). The Supreme Court held that for purposes of hiring, an employer's use of a high school diploma requirement and aptitude tests violated the Civil Rights Act. Black applicants disproportionately lacked diplomas and/or scored low on the tests. Under the disparate impact analysis, discrimination need not be intentional. Even if an employment practice is "facially neutral," it's suspect if it has an adverse impact on members of a protected class. To avoid liability, businesses would have to demonstrate that such tests are a business necessity or related to job performance.

Racial minorities, especially blacks, should feel highly insulted by the entrenched assumption that they should not be expected to compete against whites on pencil-and-paper multiple choice civil service tests. Not only should they speak out against such condescending assumptions, they should refuse any and all special treatment, and demand to be treated as capable and responsible individuals. Such attitudes may be the impetus needed to put an end to these ridiculous and embarrassing lawsuits.

Remember the whole point of the civil rights movement: to be treated equally as individuals by the government, without regard to race. Every lawsuit and complaint that cites "disparate impact" confirms that our government believes blacks and other preferred minorities should be held to lower standards in perpetuity.