Larry Provost
|
Posted: Nov 28, 2016 12:01 AM
Share   Tweet
The opinions expressed by columnists are their own and do not necessarily represent the views of Townhall.com. 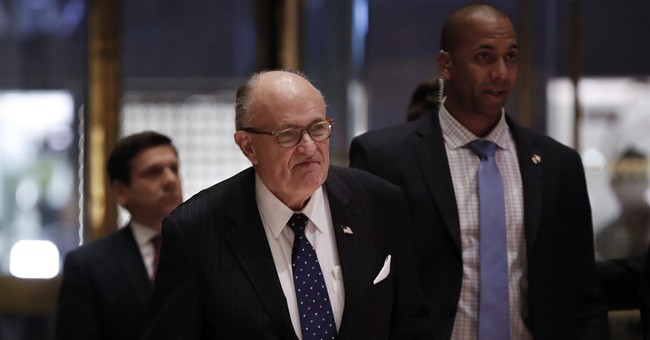 The leftist elites are rapidly seeking their first casualty after losing to the will of the people in the respective states. One person the left is attacking with great zeal is former New York City Mayor Rudolph Giuliani who is in the running for the position of Secretary of State.

This is what leftist elites do when they cannot win with the facts; certain of those facts being that Obamacare premiums have jumped exponentially, still supporting abortion even at the latest stages before birth, and that they won’t call out Radical Islam by name even for murdering gays.

Instead of focusing on the most vulnerable and endangered, leftist elites bring up controversies centered around political correctness. This they are attempting to do with Rudy Giuliani.

One of the so called, and frankly old and recycled, controversies stems over Mayor Giuliani and the Brooklyn Museum of Art. This happened back in 1999 when Giuliani was Mayor of the City of New York and there was an exhibit, at the taxpayer funded Brooklyn Museum of Art, of the Blessed Mother, the Virgin Mary. The painting of the Blessed Mother contains photographs of female genitalia and elephant dung makes up a bare breast on her body. Surrounded by other elephant dung on the rest of the painting, this was taxpayer dollars at work.

You can paint whatever you want but it does not mean it needs to be hung up with hard working tax payer money while thumbing their nose at a religious group. Giuliani said the same thing.

Maybe the following question will help the left to understand. Would it be ok, with taxpayer dollars, to fund exhibits that depict Mohammed being smeared with excrement and showing genitalia? Thought so. This was pre-September 11, 2001 and Mayor Giuliani stood for religious freedom; a great qualification for an American Secretary of State.

As far as his qualifications for Secretary of State, Mayor Giuliani has shown better judgment than our previous Secretary of State, Hillary Clinton and her husband. President Bill Clinton invited Palestinian Terrorist Yasser Arafat to the White House to try to broker peace agreements. Arafat could not be trusted and had ordered the terroristic murder wheelchair bound American Jew Leon Klinghoffer, on board the Achille Lauro, in 1985. (Incidentally, one of Klinghoffer’s killers, Abu Abbas, was captured in the American liberation of Iraq in 2003).

Arafat came to the City of New York in 1995 and during that time a concert was being held at Lincoln Center to honor world leaders on the 50th anniversary of the founding of the United Nations. Arafat was not on the guest list but somehow was given a ticket and snuck into the event. Mayor Giuliani would have none of it and threw Arafat out; not so much for crashing the party but because Arafat was a cold-blooded terrorist. Arafat protested as did the Clinton’s protested. The Clinton White House and State Department condemned Giuliani’s “breach of international diplomacy” but Giuliani, again pre-September 11, 2001, called a terrorist for what he was. History proved him right.

The third example of Giuliani’s dealing with world leaders is perhaps the most famous. After the September 11, 2001 terrorist attacks, many offered to help the families of the victims and the City of New York. The Kingdom of Saudi Arabia, like many nations, wished to have its representatives visit the World Trade Center site where the fires were still burning and what was left of bodies were being removed.

Saudi Arabia presented a check of $10,000,000 to be used to assist the families of the victims. However, the Kingdom’s Prince who presented the check said that the United States needed to look at some of its Middle Eastern policies that were supposedly to blame for the slaughter of 3,000 innocent people. Specifically, the Saudi Prince said:

“I believe the government of the United States of America should re-examine its policies in the Middle East and adopt a more balanced stance toward the Palestinian cause. Our Palestinian brethren continue to be slaughtered at the hands of Israelis while the world turns the other cheek."

Mayor Giuliani returned the check to the Prince. This time, the State Department had no problem with the Mayor’s actions.

Incidentally the same Prince who tried lecturing the United States about its relationship with Israel, only to be publicly dissed by Giuliani, would later say that Donald Trump should drop out of the Presidential race. The leftists’ elites feel differently but it seems that Rudy Giuliani might just be the man to deal with such so-called “leaders.”